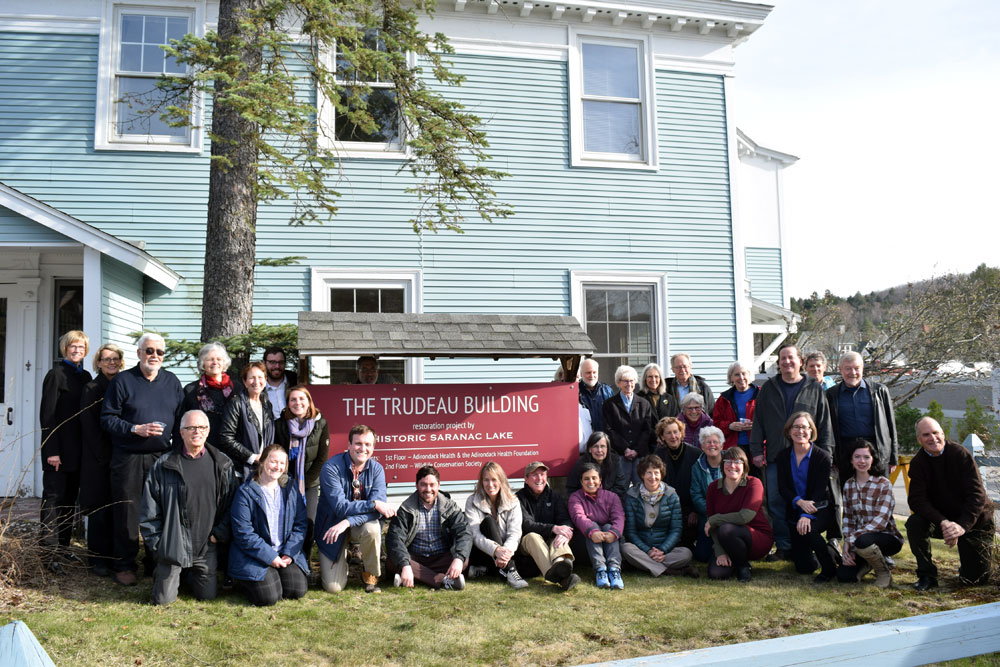 Historic Saranac Lake supporters gather outside the Trudeau Building at the corner of Main and Church streets on April 30 to celebrate HSL’s closing purchase of the former home and office of Dr. Edward Livingston Trudeau. (Enterprise photo — Jesse Adcock)

SARANAC LAKE — The public will be able to offer its opinion on the design of the newly bought second building of the Historic Saranac Lake museum tonight in the Harrietstown Town Hall from 6 to 7:30 p.m.

The new building, the former home and medical office of Dr. E.L. Trudeau at 118 Main St., was purchased by Historic Saranac Lake in April 2019. It will let the organization tell a deeper story of Saranac Lake and the history of tuberculosis in the region, according to HSL Executive Director Amy Catania.

“Right now in the lab here, we have the main exhibit on Trudeau and tuberculosis and Saranac Lake, and then rotating exhibits in the John Black Room,” Catania said.

The new building first has to be restored to its historic condition. So far, $850,000 of the estimated $2 million needed for the repairs and renovations has been raised. Construction is not set to begin until next year.

The new building is set to help explain the broader context of the history of the Saranac Lake Central School District and what happened to the area after the curing of tuberculosis industry left.

Leading the discussion tonight will be professional museum planner Kate Cravens, who works as a private consultant in Minnesota and has worked at the Museum of Racing in Saratoga. Catania said the discussion will be informal and that Cravens will ask those who attend questions regarding what they would like to see in the new building and their expectations.

Catania said those who are unable to attend will have other opportunities to give their input. No other public forums have been set up, but could be in the future. Those with ideas and questions can also email Catania at amy@historicsaranaclake.org.