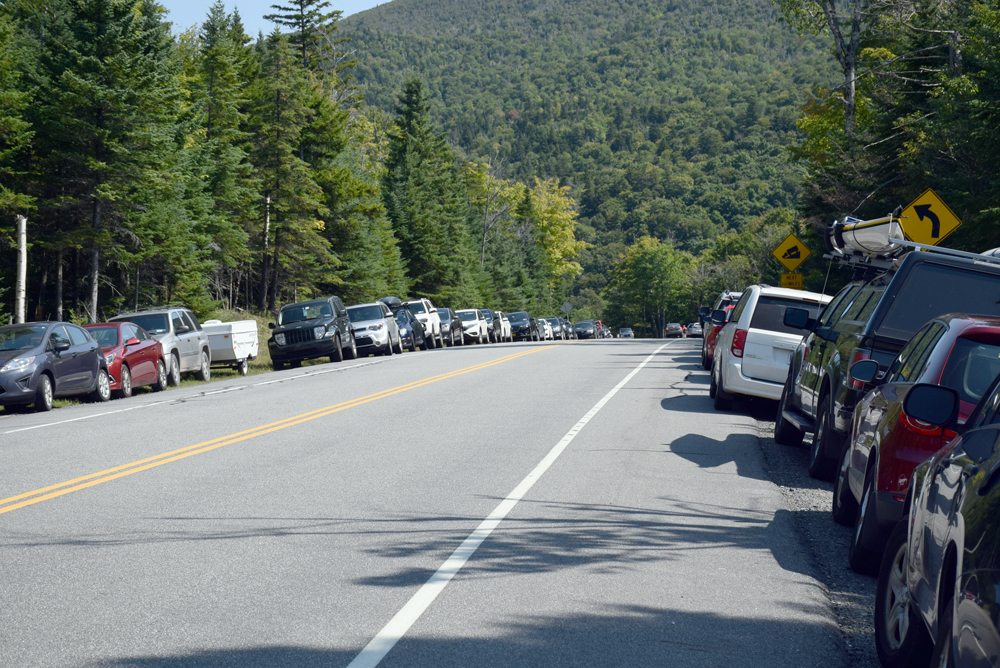 The collision happened shortly before 8:20 a.m. Monday, July 1. State Police said the driver of a 2014 Subaru Outback, 39-year-old Eric Toal of Hazlet, New Jersey, was attempting to make a U-turn from the northern shoulder of Route 73 into a parking spot at Cascade.

There was adequate parking along the roadside, but not necessarily in the designated parking area, according to New York State Police Public Information Officer Jennifer Fleishman.

Fleishman said Toal was able to pull into a parking spot, but when he went to turn around, he failed to yield the right of way. He collided with a 2013 Honda Accord traveling westbound on Route 73 being driven by Beth A. Beahan, 54, of Hudson Falls. The vehicles collided in the westbound lane.

Elizabeth Toal and two young children were passengers in the Subaru Outback. Elizabeth was taken to the Adirondack Medical Center by Lake Placid EMS for an evaluation due to her being pregnant. No one was injured, according to Fleishman. Eric Toal was ticketed for failing to yield the right of way.

Collision outside parking ban, but serves as example

The collision comes as the state Department of Environmental Conservation attempts to address overcrowding at Adirondack trailheads, specifically in the High Peaks and Giant Mountain wilderness areas.

Trails within the High Peaks continue to be popular. Some advocacy groups, including the Adirondack Council, have argued that most of the parking areas along Route 73 are already beyond capacity during peak demand times.

A study released by the Adirondack Council last year showed that at peak weekend demand times in 2017, parking at nearly 80 percent of trailheads in the High Peaks and nearby wilderness areas were over capacity. Though there was a capacity for 73 cars at the Cascade trailhead, 240 cars were parked there, the study found.

Citing public safety, the DEC instituted a parking ban along a 4-mile stretch of Route 73 in May.

The state Department of Transportation has since installed “no parking” signs between the Rooster Comb trailhead in the hamlet of Keene Valley and the Chapel Pond trailhead to the southeast.

Parking is still allowed in designated pull-off areas along the road, but parking on the shoulder is prohibited “for public safety reasons, primarily because pedestrians, mainly hikers and bicyclists, were forced to walk or ride in vehicle lanes when parked vehicles occupied the shoulder of the road,” the DEC said in a news release.

The department began enforcing the ban shortly afterward. Between June 8 and June 9, the DEC doled out 70 parking tickets to hikers parked along the roadside in that area — at the time, that was roughly 70% of the total tickets the DEC had issued in that area since last September.

The Toal-Beahan collision happened in the town of North Elba, outside of the department’s no roadside parking zone. But at a meeting of the Essex County Board of Supervisors that same morning, DEC Region 5 Director Robert Stegemann cited the incident as a prime example of why the department needs to tackle the issue of parking and overcrowding.

“Well, that’s one of the reasons we’re talking about this stuff,” he said.

At that meeting, Stegemann outlined the DEC’s plan to commission a transit study of Route 73 from Lake Placid to almost Interstate 87. The study will look at whether there’s a need for hiker transportation from designated parking areas to trailheads, if current programs in place adequately address those needs, and what sort of transportation may be needed to facilitate safe travel.

Some Essex County supervisors have questioned where hikers who arrive after parking lots are full will go to park, how they’ll get from point A to point B, and who’s going to foot the bill for that transportation. Stegemann said the possibility of shuttles for hikers is a “subject ripe for discussion.” He also said that new parking lots in the Chapel Pond area will hopefully “take some pressure off the Route 73 stretch.”

The parking ban along Route 73, the accompanying signage and new parking lots, are just a few pieces of an overarching, multi-pronged effort by the DEC to ebb overcrowding at trailheads and manage the ensuing effects.