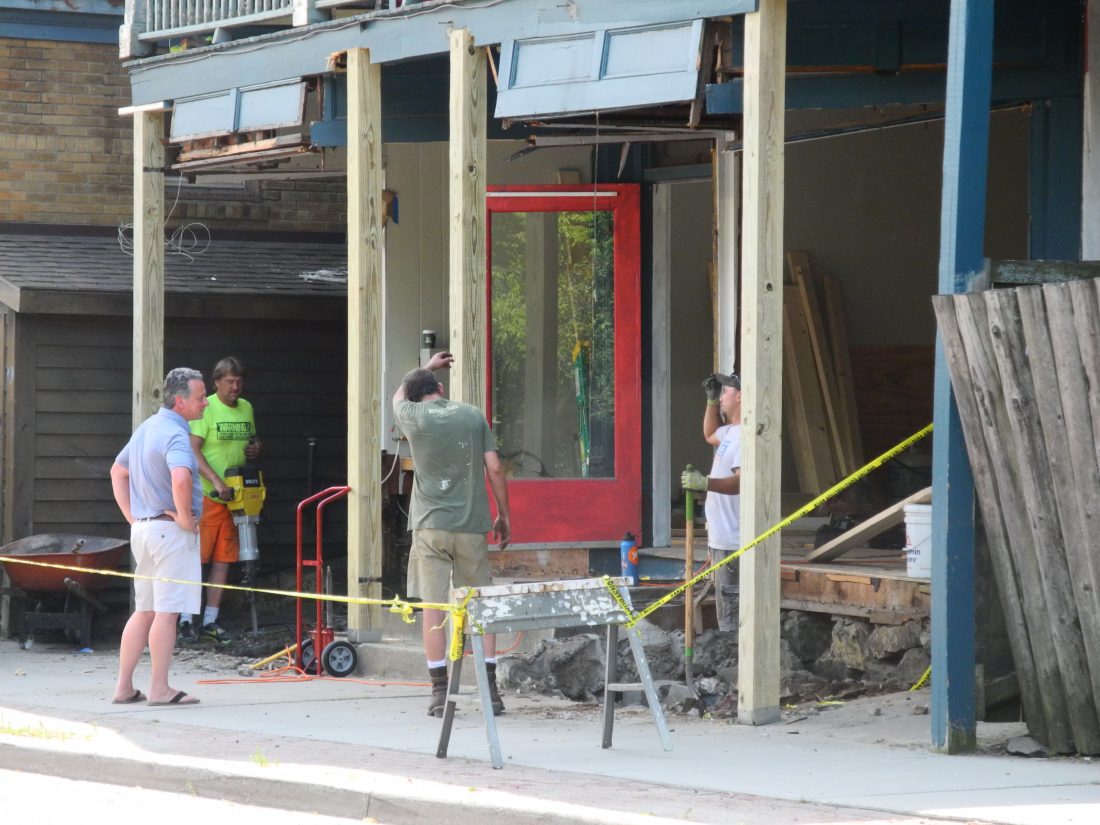 SARANAC LAKE — Construction workers are replacing the face of a former restaurant on Broadway as they finish renovating the building.

Three apartments upstairs have already been renovated, and now it’s time for the former Eat ‘n’ Meet and Foote Rest Cafe on the street level. Wood in the storefront had rotted, and the whole thing will be replaced. Modern windows sit waiting to be installed, replacing old single-pane plate-glass windows.

The building is owned by 135 Broadway Apartments LLC, a corporation formed by two couples, Karen and Steven Sidrane and Paul and Nancy Levitt, who primarily live in Long Island but have been vacationing in Loon Lake for decades. Brian Draper of Say Real Estate manages the property for them.

She said they don’t have a tenant lined up yet for this storefront, but they hope to get a restaurant that would reopen the miniature golf course atop a rocky rise next to the restaurant. The mini-golf course was open both under Foote Rest and Eat ‘n’ Meet.

The couples also own the four-story commercial-residential building next door at 135 Broadway, its elevated parking lot next door and a vacant lot between that parking lot and Wendy’s Christian Bookstore. They bought all of those parcels between March and May of 2018.

That vacant lot at 133 Broadway — which local residents may remember as the former home of Standard Tire — is where they had planned to build a new building with commercial use downstairs and apartments upstairs. The project was among those submitted to the state for a grant from the Downtown Revitalization Initiative, but it was not included in the final list Lt. Gov. Kathy Hochul announced here last week. The property owners had asked for the DRI to cover $822,500, about half the estimated project cost of $1,625,000.

Karen Sidrane said the property owners aren’t yet sure of the status of that project now.

“It’s so soon since we found out the news about the DRI,” she said.

She said the next project on their list is to expand and upgrade the apartment building’s parking lot.