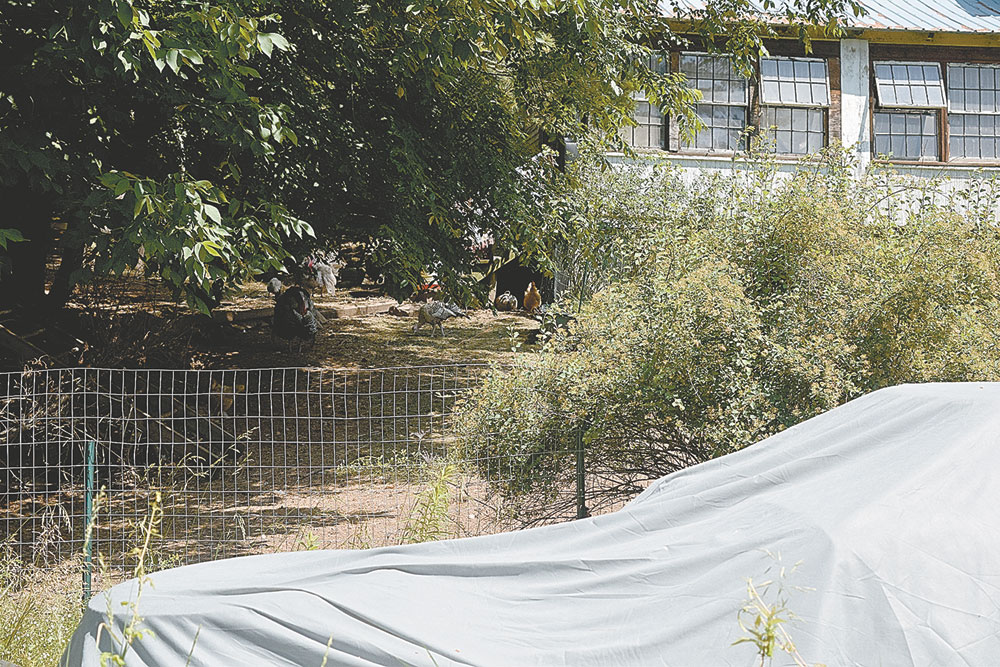 Those who have complained to the Saranac Lake village board regarding the rooster crowing on Leona Street have said they’ve heard it early in the morning and late at night. (Enterprise photo — Kevin Shea)

SARANAC LAKE — The rooster’s crow was faintly heard at the intersection of Leona Street and Olive Street by this reporter. It was easily heard outside 33 Leona St., but soon it may not heard at all.

“What I would like to talk about is how incredibly difficult it is when you live next to a rooster to have any semblance of sanity or ability to live a normal life,” Eric Bennett said in the public comment section at a village board meeting Monday night.

As he spoke, he played a YouTube video of a rooster crowing every couple of seconds. No, it was not the same rooster from 65 Leona St. Bennett said his tenants at 33 Leona St. are unable to know peace because of the noise. Those living at 65 Leona St. did not respond in time for this article.

At a separate board meeting on June 24, one of his tenants at 33 Leona St., Kathy O’Kane, raised complaints about the noise and said that it bothered her morning and night. In 2017, she had made similar complaints.

Complaints such as Bennett’s and O’Kane’s were raised and addressed by the village Board of Trustees three years ago when the problem first arose. The board will now try again.

At the time, village code was written so that the roosters would be grandfathered in but only for two years, according to Mayor Clyde Rabideau. There was a problem, however. The code was put under a section regarding land use and development, meaning that the code regarding the roosters and other livestock only functioned for new buildings. The house at 65 Leona St., where the rooster that started and restarted the conversation regarding animals as a nuisance, had already been built before the code.

Now, to combat the issue again, the village will look to take legislative action and change village law Chapter 68 — which regards animals and is 11 years old — a path not all members of the board agree with.

“I don’t feel comfortable with that,” village Trustee Paul VanCott said at Monday’s village board meeting. “There is a process for dealing with changes with the code. I think that means starting with the code enforcement officer, code administrator, having a recommendation from that individual, working it through the development board and bringing it to the village board. For us to do this, I think sets a very bad precedent.”

VanCott said it could set the village up for potential civil liability, and the village should allow the code enforcement office to deal with the issue.

“I think in this case, to me, roosters, situation aside, should be treated as dogs and other animals listed in this code are,” Trustee Melinda Little said at the meeting.

The proposed change to the law, which the public will be able to address at 5:30 p.m. July 22 at the Harrietstown Town Hall, says that keeping an animal older than 6 months old that makes noise that is deemed a nuisance, such as crowing, must be removed. Also, any roosters in the village 6 months or older at the time the proposal as written into law must be removed after six months.

Dave Staszak, who lives at 68 Leona St., said the junk in front of the house — abandoned cars, bicycles and used tires — bother him more than the roosters. He wants something done about that.

Between 11:27 a.m. and 11:30 a.m. on Tuesday, the crowing could be heard either three times a minute or a couple of minutes by this reporter. Also heard were the children from the nearby Petrova Elementary School and the rush of cars on state Route 3.