An excerpt from the Lake Placid Club Notes of March 1905 suggests to members that the club exclude anyone “against whom there is any reasonable physical, moral or social objections or who would be unwelcome to even a small minority.” The measure was adopted unanimously by its members, according to the club notes from July of that same year: “On 2 things members were unanimous: to maintain fully standards of admission and to adopt the proposed voucher system for simplifying charges and bills.” (Enterprise photo — Elizabeth Izzo)

Melville Dewey was the founder of the internationally renowned Lake Placid Club, a portion of which is pictured here, date unknown. (Enterprise file photo) 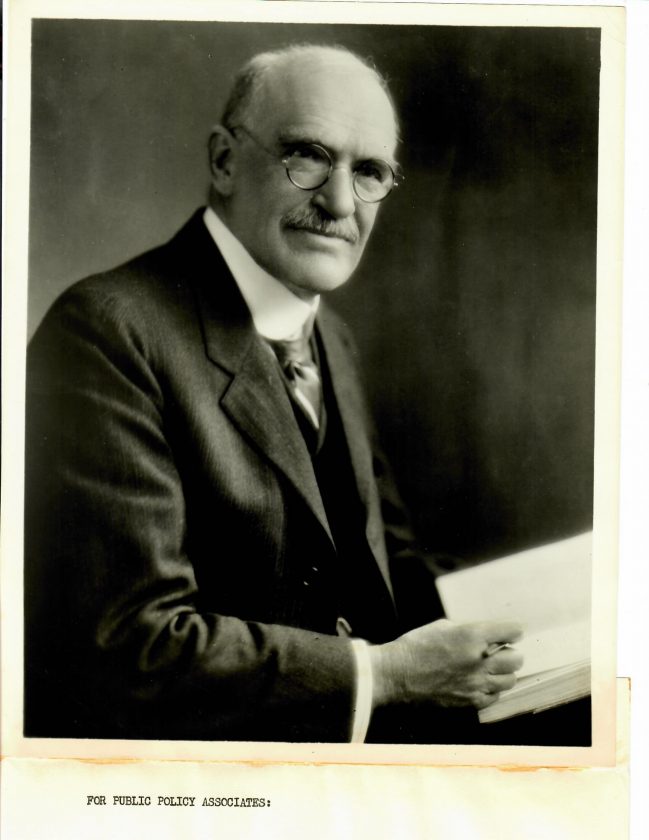 LAKE PLACID — The name of Melville Dewey, creator of the Dewey Decimal System and the Lake Placid Club, has been stripped from a memorial medal given out by the American Library Association.

The decision to remove his name was handed down by the American Library Association Council at the annual ALA Conference in Washington, D.C., on June 23.

In its resolution to rename the award, the council cited allegations of anti-Semitism, racism and Dewey’s “numerous inappropriate physical advances toward women he worked with and wielded professional power over.”

Some of those unwanted advances happened at ALA functions.

“During the 1906 ALA conference there was a movement to censure Dewey after four women came forward to accuse him of sexual impropriety, and he was ostracized from the organization for decades,” the resolution reads. “The behavior demonstrated for decades by Dewey does not represent the stated fundamental values of ALA in equity, diversity and inclusion.” 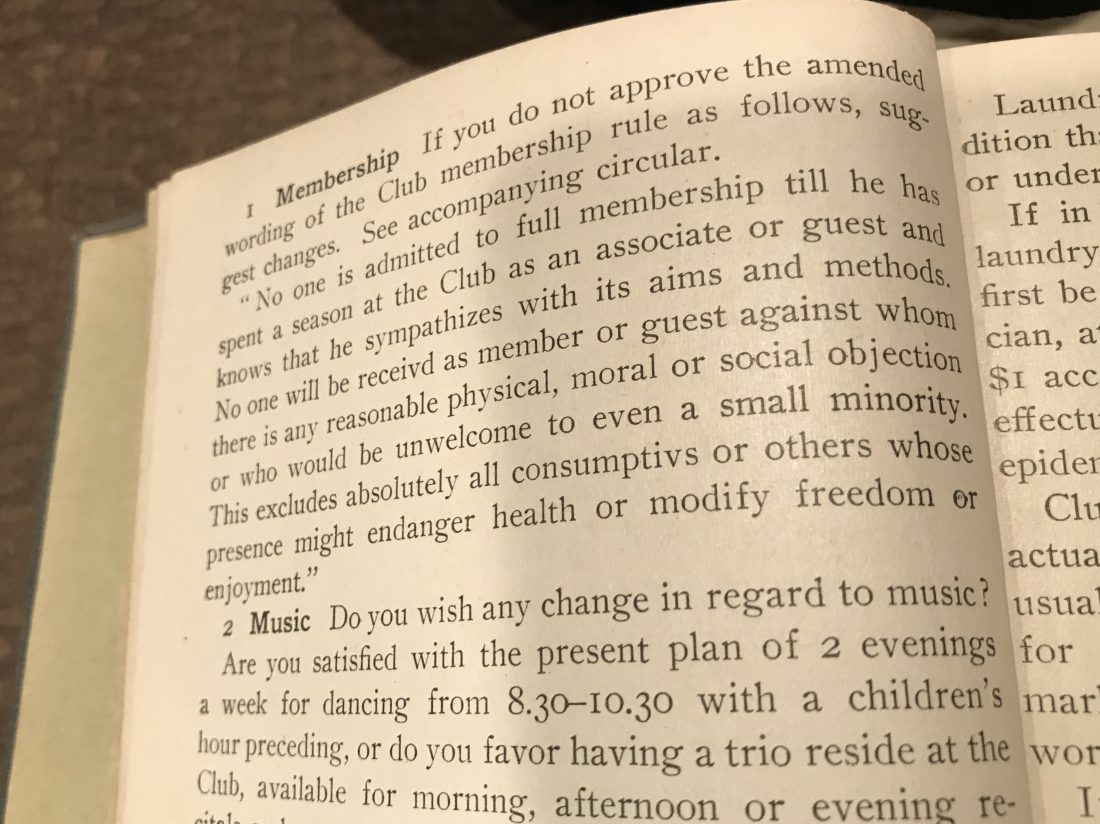 An excerpt from the Lake Placid Club Notes of March 1905 suggests to members that the club exclude anyone “against whom there is any reasonable physical, moral or social objections or who would be unwelcome to even a small minority.” The measure was adopted unanimously by its members, according to the club notes from July of that same year: “On 2 things members were unanimous: to maintain fully standards of admission and to adopt the proposed voucher system for simplifying charges and bills.” (Enterprise photo — Elizabeth Izzo)

Dewey was among the ALA’s original founders. He served as president of the organization for two years and as secretary for 15 years.

He’s best known as the father of the Dewey Decimal System, a classification system commonly used by libraries today. He’s also known as the founder of the Lake Placid Club, a resort around which the modern village of Lake Placid was built.

He was a staunch advocate for libraries, higher education and simplified spelling reform — he spelled his first name Melvil and renamed the three-story Adirondack Lodge resort at Heart Lake to “Adirondak Loj” after Henry Van Hoevenberg sold it to the Lake Placid Club in 1900. After graduating from Amherst College, he served as chief librarian for Columbia University for five years. He was named director of the New York State Library, one of the largest libraries in the world, in 1888 at the age of 37 and he remained in that position until 1905, when he was pressured out over allegations of anti-Semitism. He also served as the executive officer of the University of the State of New York for 12 years, and founded the Library Bureau.

“We wouldn’t have libraries without him,” she said. “There are 40,000 items in this library, but we can quickly find and hold any of them in our hands because of him. We know where they are because of the (Dewey Decimal System). It works. 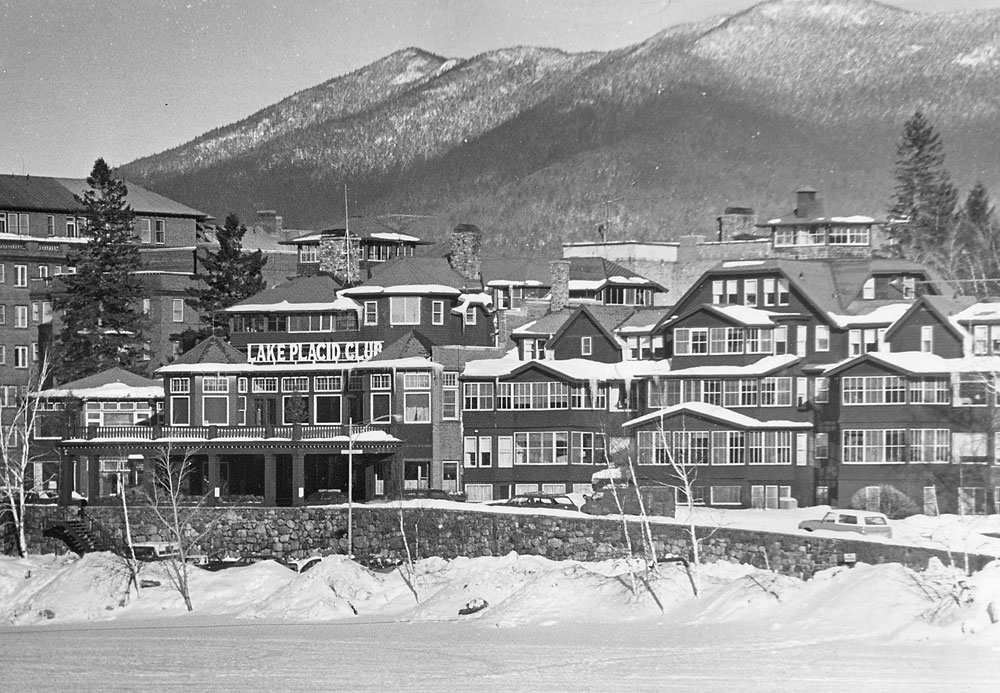 Melville Dewey was the founder of the internationally renowned Lake Placid Club, a portion of which is pictured here, date unknown. (Enterprise file photo)

“That’s a pretty big impact on the world of libraries.”

Pedu said she understands the matter is sensitive and doesn’t want to discount anyone’s feelings, but she said she disagrees with the ALA’s decision to remove his name from the award.

“I agree he’s not the nicest person in the world,” she said. “But he was a founding father of libraries. I think it’s unfair to judge people of the past with today’s standards.”

Dewey’s legacy is deep-rooted in Lake Placid’s history. Though he was born in Adams Center, Jefferson County, later in his life he purchased property on what is now Hillcrest Avenue in Lake Placid. He purchased more property along Mirror Lake and then, in 1895, leased a farmhouse on a piece of land called Bonniblink.

That farmhouse would later become the Placid Park Club, a seasonal home that Dewey, then the New York state librarian, used as a summer retreat for educators and librarians.

The retreat was an early precursor to the Lake Placid Club, which Dewey established in 1895. The Lake Placid Club was an exclusive and internationally renowned resort that grew to encompass 9,600 acres by the 1920s. The entire village of Lake Placid today takes up less than 1,000 acres. The club had its own fire department, farm, theater and even its own school, now known as Northwood School.

The Lake Placid Club, and the Dewey family, had an immense impact on the village.

Dewey was the founder of the Lake Placid Education Foundation, a nonprofit group that still doles out grants to schools, libraries and cultural organizations.

Godfrey Dewey, Melville’s son, was credited with helping to bring the Winter Olympics here for the first time in 1932. When the Olympics returned to Lake Placid in 1980, the Lake Placid Club served as the headquarters for the International Olympic Committee.

The Deweys, the Lake Placid Club and its Sno Birds — a group of winter sportsmen that oversaw the club’s winter activities — are often credited with helping to popularize winter sports in the United States. That includes bringing speedskating and bobsledding here.

Both Deweys have been inducted into the Lake Placid Hall of Fame. When reached by phone Wednesday, Sandy Caligiore, head of the hall of fame committee, said this was the first he’d heard of allegations of bigotry and harassment against Melville Dewey.

The committee hasn’t discussed removing him from the hall of fame, he said.

Dewey’s Lake Placid legacy has been controversial for a long time.

Under his leadership, the Lake Placid Club barred Jews, people of color, people with tuberculosis and anyone “against whom there is a physical, moral, social or race objection, or who would be unwelcome to even a small minority,” according to “Contested Terrain: A New History of Nature and People in the Adirondacks,” a book written by author, researcher and professor Philip G. Terrie in 2008.

Dewey was effectively ousted from his spot as the state librarian for this policy after the New York State Board of Regents received a petition demanding his removal, according to a Feb. 16, 1905, article in the New York Times.

He was “admonished by the Regents that his continued responsibility for the circulation of such literature would be incompatible with his position as State Librarian,” according to the Times, and ultimately resigned in 1905.

In his book, Terrie wrote that the time Dewey lived in, the late 19th century, was an “age of intense racial anxiety” in the Adirondacks.

“One of the many ways this anxiety was manifested was in the hope that the Adirondacks and other American enclaves of wild nature could be maintained as a retreat for the racially pure from the ethnic melting pot of the cities. The Adirondacks became infamous for the WASPish racism of its expensive resorts, clubs, and hotels: advertisements blatantly expressing such ugly sentiments as ‘Hebrews need not apply’ or ‘Hebrews will knock vainly for admission’ were common.”

Though men were allowed to smoke in certain areas of the Lake Placid Club, Dewey refused women the same right, once saying that the club was established “solely to make a home for a reputable minority who greatly disliked and wished to escape from smoking women,” according to “Impossible Reformer,” a biography of Dewey written by Wayne Wiegand in 1996.

That biography goes on to say that Dewey had “a persistent inability to control himself around women.” It outlines an allegation made against him by a former employee in 1927 of kissing and touching her in public without her consent.

The New York Yankees recently stopped playing her rendition of “God Bless America” during the seventh-inning stretch, and a statue of her outside the Philadelphia Flyers’ hockey arena was recently removed. The teams discontinued playing her rendition of “God Bless America” in light of other songs, with racist lyrics, that she sang in the 1930s like “Pickaninny Heaven” and “That’s Why Darkies Were Born.”

On the other hand, later in her life, she was recorded on a national prime-time radio show as saying social prejudices, religious bigotry and “race hatreds” were “diseases that eat away the fibers of peace.”

While many residents here defended Smith as her songs and statues were removed, others felt the damage of her songs lingered.

Alice Green, a black woman raised in Essex who now serves as the executive director of the Center for Law and Justice in Albany, has said she believes Smith’s early song renditions perpetuated stereotypes that are harmful to people of color.