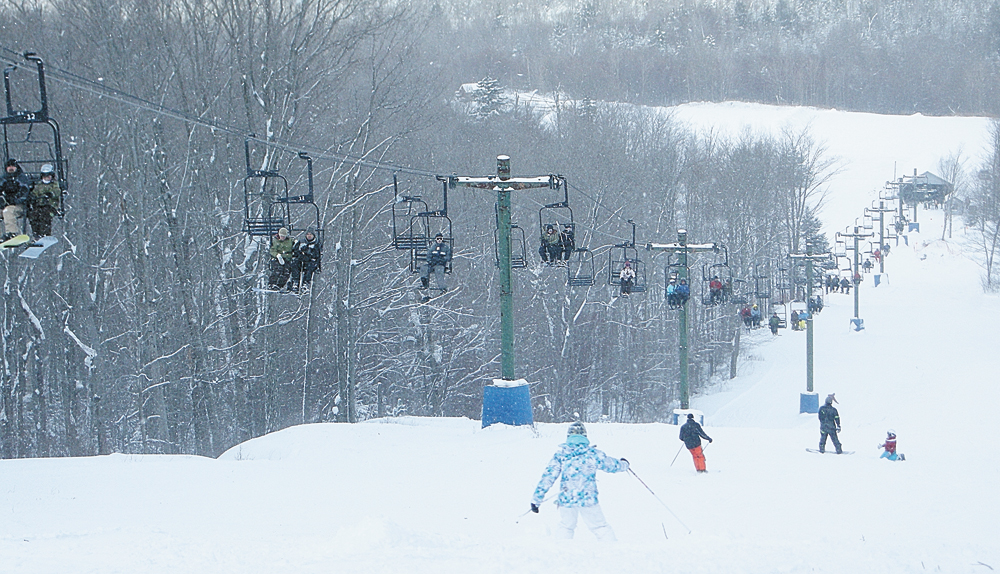 Big Tupper Ski Area is busy in 2011, when it was being run by volunteers. (Enterprise file photo — Jessica Collier)

TUPPER LAKE — The developers behind the Adirondack Club and Resort and Big Tupper Ski Area projects have over $10 million in debts to Franklin County, golfer Greg Norman and two law firms. The county is preparing to foreclose on the key ACR properties unless developers can pull together the money to redeem them by the auction date.

The developers of the ACR project, Tom Lawson and Michael Foxman, spent years in court battling environmental groups. Before that they spent years getting state agency approval to go ahead with their real estate plan to fund the reopening of the Big Tupper Ski Area.

Their company, Preserve Associates LLC, eventually got their permits and won in court, but spent millions of dollars on legal teams in the process. Two law firms recently took Preserve to court over around $9 million in unpaid legal fees and got a judgment in their favor.

In February, the state Supreme Court in Albany County sided with two Albany law firms that sued Preserve for breaking a written agreement to pay past-due legal services rendered from 2004 through 2018.

Shanley, Sweeney, Reilly and Allen provided legal services from 2004 and 2005 in connection with the real estate development work on the project. The court said that firm is owed $768,582.

By January 2006, Preserve had fallen behind in its payments. Later that year, SSRA then became part of the firm Whiteman Osterman & Hanna, which provided services through 2018. It is owed $8.2 million.

The decision notes that all of this litigation was decided in Preserve’s favor.

When asked how Preserve would pay back the legal fees in the future if it was not able to in the past, WOH attorney Robert Sweeney laughed and said, “That’s quite a question.”

Sweeney did not explain how those payments would happen but said that currently, “no amounts have been paid.”

Preserve and Big Tupper LLC, a related company that owns the ski center, owe hundreds of thousands of dollars in property back taxes, according to Franklin County Treasurer Frances Perry.

They had already paid back hundreds of thousands through the longest payment schedule available to any New York taxpayer, but have not made any of their monthly payments since February, Perry said. She said the LLCs defaulted on their installment plans and cannot re-enter them.

The county will foreclose on the properties and sell them at a tax auction sometime in the next six to nine months, Perry said. The county is behind in scheduling its tax auctions

Franklin County will allow the companies to pay off the money owed for the properties in full, up until the day of the auction. Also, individual properties can be redeemed. The largest two properties, the ski area and the ACR land, (the 4,000 acres around Simon Pond, the Tupper Lake Golf Course and the east shore of Tupper Lake) have $115,704.46 and $161,295.40 in taxes left to pay, respectively. The rest of five other properties total $116,198.34 in back taxes.

Preserve was going to collaborate with Norman’s company for a national and international advertising campaign. The town-owned golf course next to the resort site was an asset the ACR developers wanted to partner with.

“Greg Norman is unfortunately no longer involved with the Adirondack Club. Preserve Associates has failed to honor its payment obligation to us therefore Greg Norman and his company have terminated its contract with Preserve and are actively pursuing their rights under the contract,” ManNeille wrote in an email. “We are pursuing our right to collect through mediation at this time.”

Repeated attempts to contact Lawson and Foxman for this article were unsuccessful.

See today’s North Country Living section: With the Big Tupper owners in debt, Tupper Lakers question when and if the mountain will re:open.