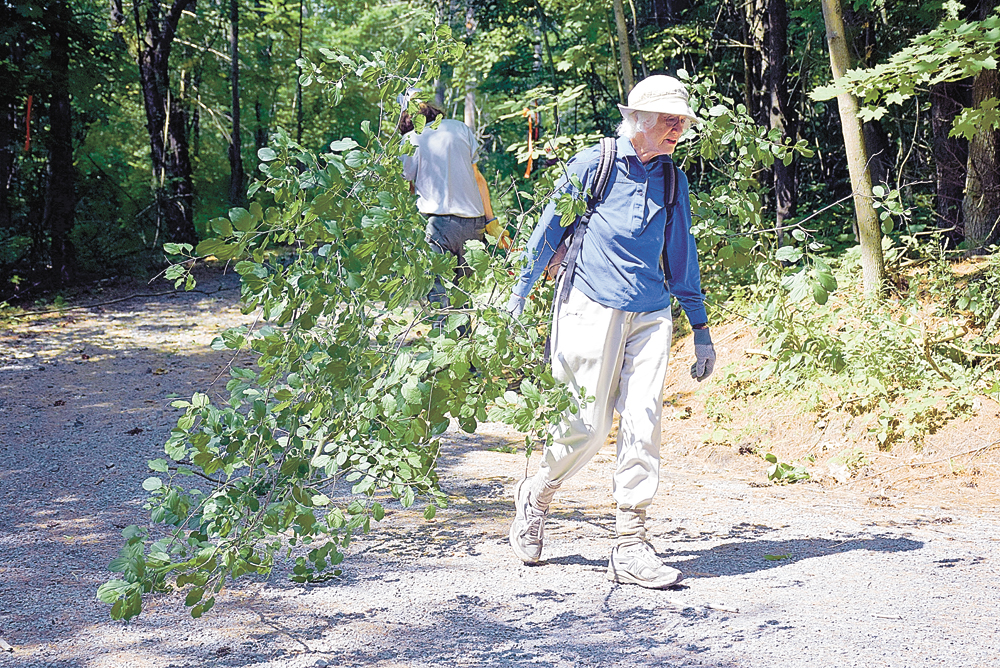 Patty Paine, of the Adirondack Garden Club, hauls a bunch of buckthorn — an invasive species — to the disposal site at the Boquet River Nature Preserve. (Enterprise photo — Justin A. Levine)

WILLSBORO — For the last four years, the Adirondack Chapter of The Nature Conservancy — along with private land owners, local government leaders and volunteers — has worked to transform more than 100 acres in Willsboro into an accessible nature preserve.

After years of abuse — including ATV riding and littering — TNC has improved trails and cleaned up the Boquet River Nature Preserve. But cleaning up the area involves more than just picking up discarded beer bottles and candy wrappers. Earlier this month, a group of volunteers took to the woods to remove more than just litter.

While the Adirondacks are home to hundreds of infestations of invasive species — from milfoil and spiny waterflea to wild parsnip and hemlock wooly adelgid — the Blue Line is in far better shape than much of the rest of the state and the Northeast in terms of the size and number of infestations.

APIPP and TNC staff, along with members of the Adirondack Garden Club, convened at the Boquet River preserve to engage in what might be considered the antithesis of a garden club: pulling plants out of the ground. 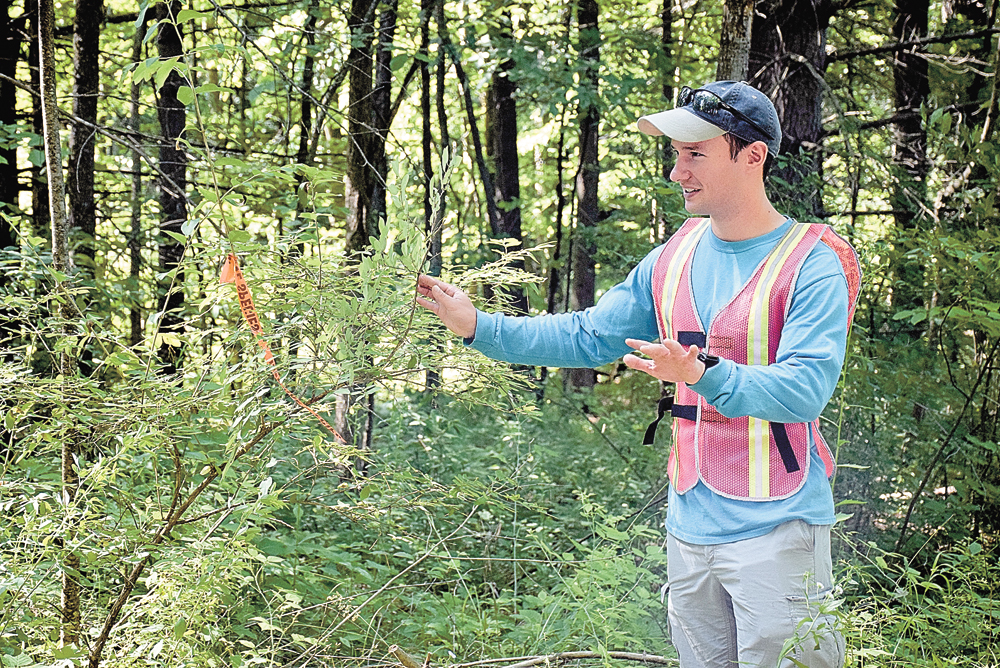 While the preserve has been improved over the last several years, invasive plants still call the area home, including buckthorn and bush honeysuckle. After a brief lesson on the dangers of invasive plants — including wild parsnip, which is also present at the preserve and can cause serious burns if handled — staff and volunteers took to the woods to do some weeding.

“ATVs were a common occurrence; there was a big fire pit and debris and garbage near the center of the preserve,” Bill Martin, who works for TNC, said of the preserve. “We did a lot of cleanup. We got a lot of support from the community. The town of Willsboro has been very supportive — and the community itself, the people here have started using the preserve.

“We solicited a lot of feedback, like ‘What does this community need?’ and it was an accessible trail. Especially with the senior living community just down the road (Champlain Valley Senior Community). And the Conservancy is focused on increasing access and providing a place where people can experience nature.

“And that is our goal here, to give this community that experience,” he continued. “And through the efforts of us and the town, we’ve seen a huge transformation. It went from disuse or misuse, with ATVs and partying in the early 2000s. And we moved in 2017 to this accessible trail, and since then I’ve had (just) one occurrence of ATV trespass, and the town actually jumped on it. They put it on their Facebook page. The communities were like, ‘We can’t have this.’ They were standing up for themselves, and to me, it’s very empowering.

“To me, it’s not the typical success story … but the preserve is now being used as it was intended. Our work is never done, but so far, so good.” 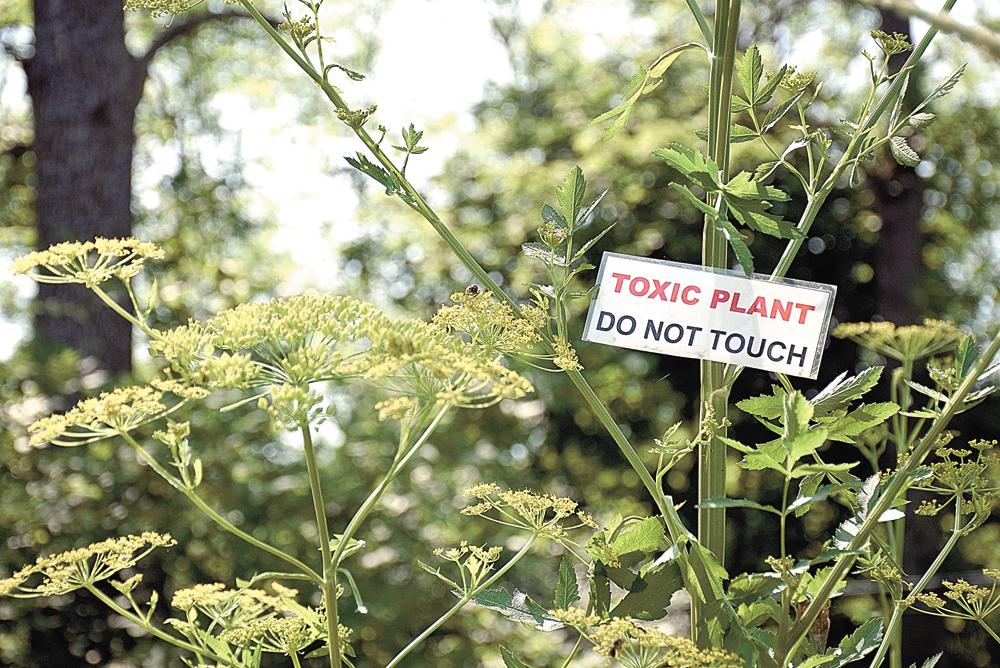 Wild parsnip — seen here — can cause severe burns to the skin, and is an invasive species. (Enterprise photo — Justin A. Levine)

Martin said having the volunteers there to pull invasive species was a big deal, as the Adirondack Garden Club claims members from around the North Country.

“It’s huge,” he said. “Every little bit helps. Invasive species are an issue everywhere in the Champlain Valley. We’re always looking to have different events and different people out here. Diversity is huge … and that’s what we intended it for. Having people of all ages and all abilities come out here and experience nature — whether it’s a sight, a sound, a smell, things like that can mean a lot to folks.”

The Adirondack Garden Club, which has been around for nearly a century under various names, had about 20 members on hand at the preserve to help pull invasive buckthorn and bush honeysuckle. Each can crowd out native plants and may even increase the number of ticks because of microclimates created under and around the plants.

“We’ve been involved with APIPP for a long time, but we’ve never actually done anything other than collect and disseminate information,” Cornelia Forrence, who lives in Peru and is president of club, said. “So I’ve always wanted to pull the things out. After we take these out, generally the next step is to replace them with natives (plants). But in a situation like this, you probably don’t need to since the natives are all here and they should fill in. 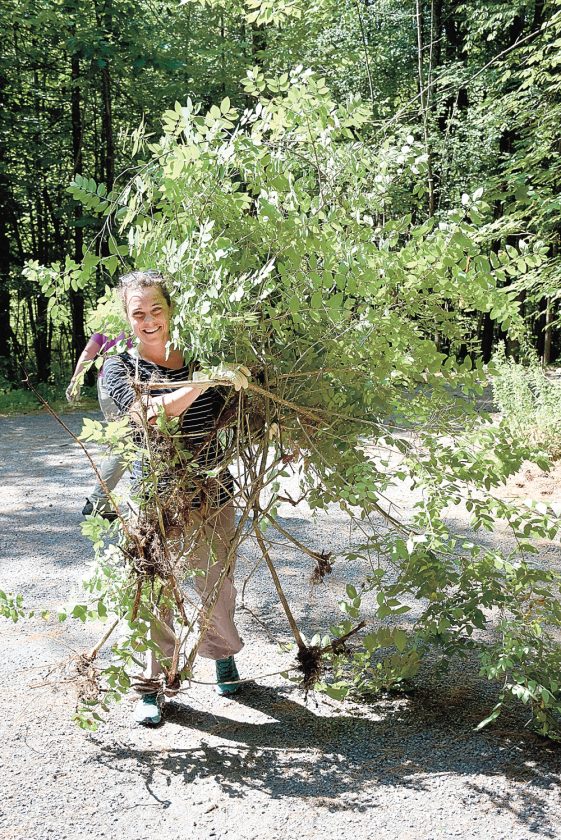 Sophie McClelland, of The Nature Conservancy, carries more than an armload of bush honeysuckle — an invasive plant — during a cleanup in Willsboro on July 9. (Enterprise photo — Justin A. Levine)

“And some of those species could have pretty significant impacts to our environment, our economy or human health. In the forest pest world, the hemlock wooly adelgid is a forest pest that’s been present in New York since the 1980s but was just found in the Adirondack Park for the first time in 2017 — on Prospect Mountain in Lake George. That infestation has been managed … but it’s still a big threat and a concern for us because hemlock is such a large component of our forest. It accounts for about one in 10 trees, and in some parts of the park it’s about 80% of the forest cover.”

In some parts of the state, hemlocks have been essentially wiped out by the insect.

“It is inevitable that new infestations will arrive in the Adirondacks, and we’ll see it show up again,” he continued. “That’s why it’s so critical that people are aware of how to identify the insects and how to report it.”

As volunteers and staff began aggressively pulling invasive plants from the Boquet preserve, Simek said citizen engagement is crucial to preventing or stopping the spread of invasive species.

“I think it’s critical that the public and citizen scientists are familiar with invasive species and some of the things they can do to prevent their introduction and spread,” he said. “APIPP works across 6.5 million acres, and we have three permanent staff, so we can’t be everywhere and we can’t see everything and we can’t respond to all the infestations that we find. So having an informed public that knows how to identify and report things to us and manage infestations on their own properties is really helpful.

“One thing that we occasionally take for granted in the Adirondacks is the opportunity we still have to effectively address invasives,” he continued. “A lot of our seasonal crew typically work in the southern U.S. or in the lower Hudson Valley, (where) they have far more invasive species present and the infestations that are there are far larger — and even occasionally beyond the point of effective management.

APIPP, along with the New York Logger Training Program will host a forest pest workshop at The Nature Conservancy office in Keene Valley on Tuesday, Aug. 13. Registration is limited. To register, call Janet at the Empire State Forest Products Association at 518-463-1297.