From left, Dana, Dodge, Fee and Lady hang out at the Paul Smith’s College horse barn. Dana and Dodge are coming in as the college’s new draft horse team as Lady and Fee retire. (Enterprise photo — Aaron Cerbone) 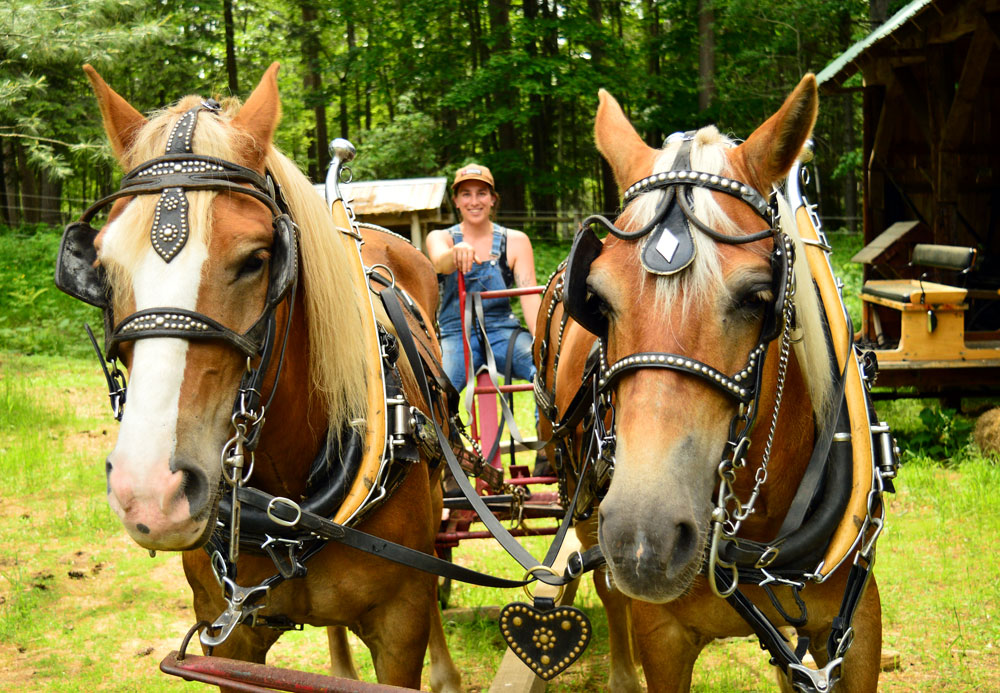 PAUL SMITHS — “Hup! Hup! Hup!” Paul Smith’s College Barn Manager Sara Dougherty shouted as the two draft horses she was driving through the campus on June 24 broke into a sprint. “Come up, Dana. Come up, Dodge.”

The two Austrian mountain ponies were on the last day of their “trial run,” a month-long period when Dougherty and others from the college would be able to observe how Dana and Dodge work, physically, mentally and emotionally.

After the ride that Monday, Dougherty confirmed that she was confident in Dana and Dodge’s ability to be the college draft horse team, and on July 1 the college officially purchased them. On July 10, the college’s trusty but aging mother-daughter team, Lady and Fee, will head to their retirement home at SUNY Delhi.

SUNY Delhi has a veterinary technician program where Lady and Fee will enjoy state-of-the-art geriatric care such as acupuncture and “equissage,” (massage for horses) among a herd of 10 horses. Students at the college will learn how to draw blood, sedate, identify bites and perform other medical procedures.

The mare and gelding pair of Dana and Dodge arrived on campus June 1 as a possible team to replace the French-Canadian Lady and Fee. After 15 years of being integrated in the college curriculum — plowing fields on the school’s farm, helping teach students logging practices and giving sleigh rides at the Visitor Interpretive Center in the winter — Lady and Fee were ready to retire. 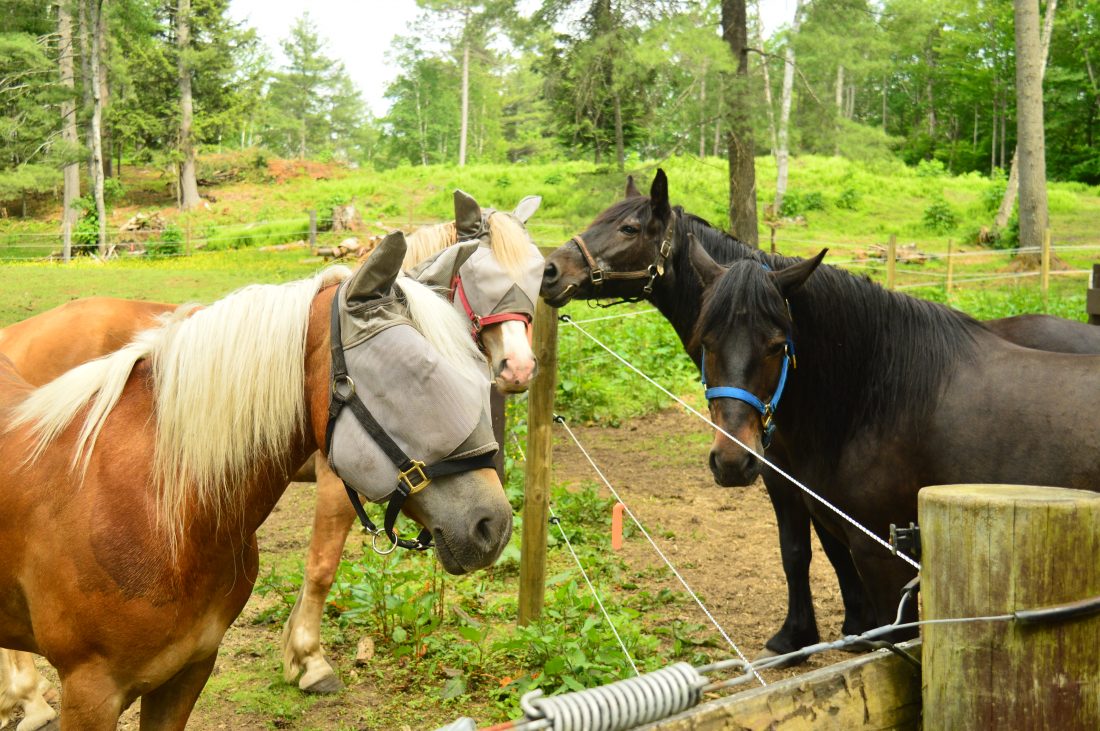 From left, Dana, Dodge, Fee and Lady hang out at the Paul Smith’s College horse barn. Dana and Dodge are coming in as the college’s new draft horse team as Lady and Fee retire. (Enterprise photo — Aaron Cerbone)

Forestry Department Chair Brett McLeod said the use of horses goes back to the earliest days of Paul Smith’s forestry and that there has never been a long gap without at least one pair at the college.

“Over the last 70 years we of course have advanced with technology to have all this much more high-tech stuff, but we’ve always felt that the horses are still relevant in the process,” McLeod said. “They may seem irrelevant to people on the outside, or like they’re just something that’s nice to have. (But) they’re really integral to what we teach.”

He said the horses are embedded in sustainable agriculture, forestry, draft horse management and winter work horse classes. He wants people to see them “less as sort of a pasture ornament and more of just another faculty member at the college.”

McLeod said though the horses are an expense for the college, when he has to make budget decisions on how to spend money, he considers the education and legacy he said the horses provide.

“(It’s about) making sure that we don’t let go of the things that make Paul Smith’s unique,” McLeod said. 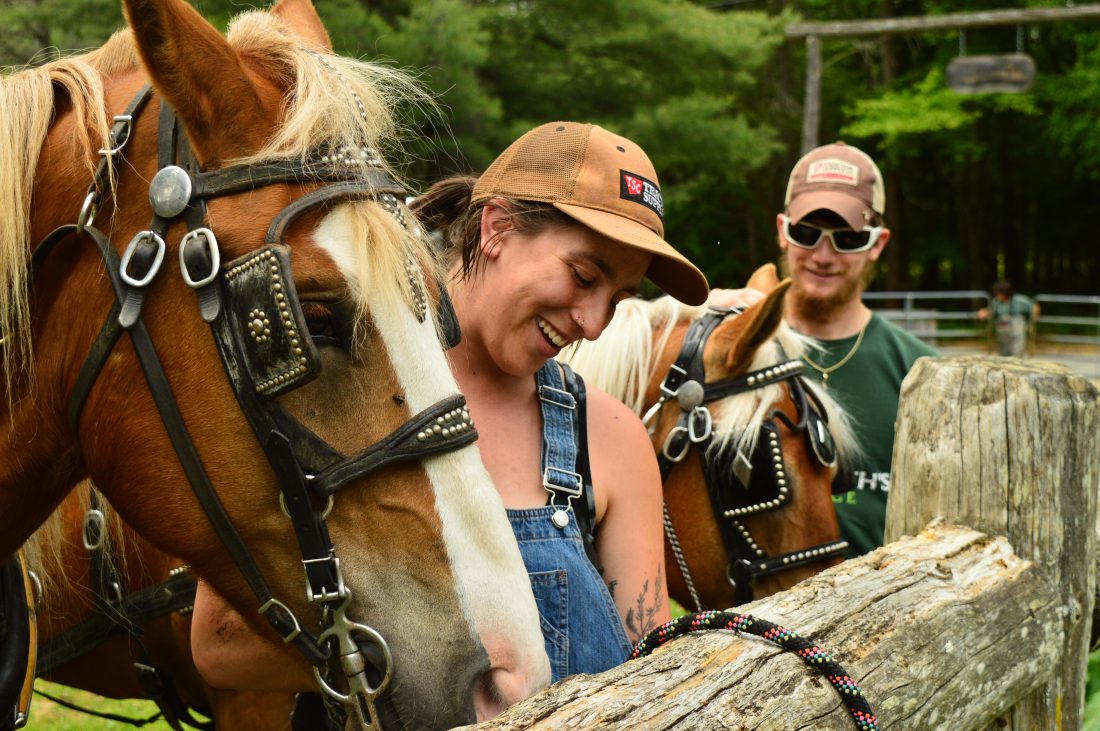 When Dana and Dodge came on campus, Dougherty started them out slowly. The first day staff just pet and brushed them. The second day they were led around. On the third day they were harnessed — on the fourth, hitched to a wagon. On the fifth they started pulling carts around campus.

On June 24 Dougherty was driving Dana and Dodge with a fore cart attached. McLeod said the fore cart is the “ATV of the horse world.”

Horses are skittish, powerful, suspicious and intelligent. They need to trust the person leading them.

“A horse that makes their own decisions is going to put you in danger and themselves in danger.” 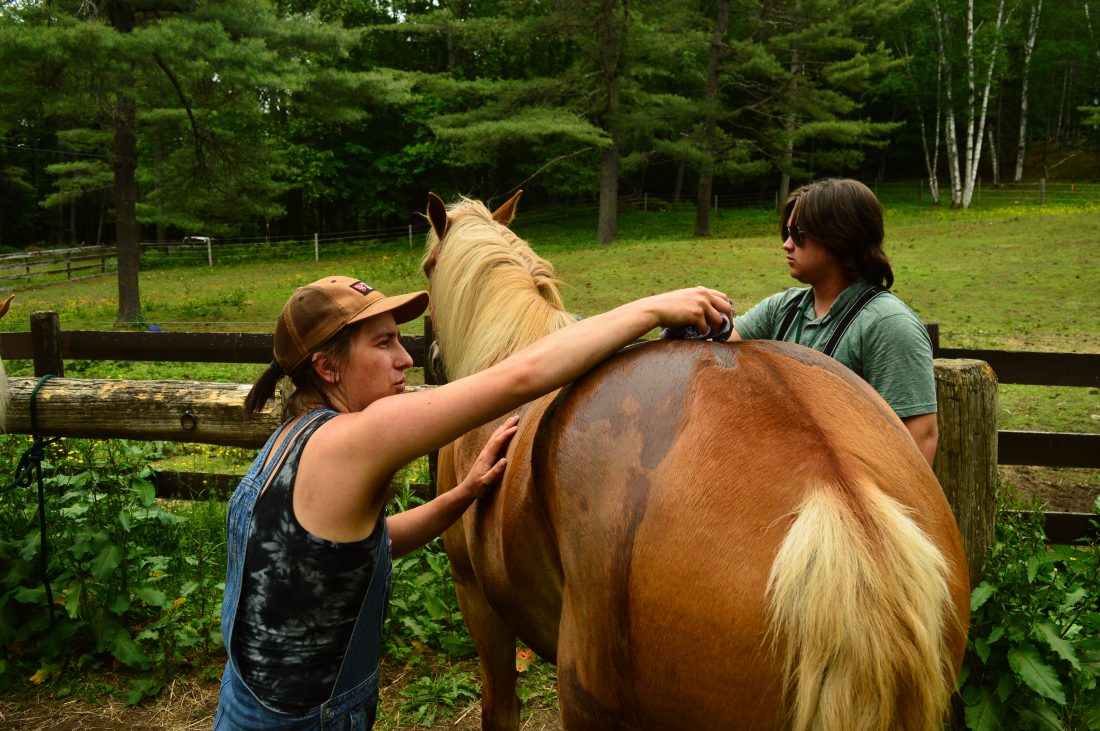 As Dougherty drives Dana and Dodge she is looking for signals that their thoughts are focused on her directions and that they are listening for instruction. Horses’ sight is not very strong, and with blinders on they can only focus forward while walking. The main form of communication between horse and driver is through the bit in the horse’s mouth and the driving lines in the driver’s hands.

These soft motions of the bit are supplemented by voice commands, which allows Dougherty to see if the two are responsive.

She calls their names to see their ears flick back, identifying the direction of their attention. Dana takes a couple more calls before her ears flick back. Dougherty said Dana, the older of the two, is a bit anxious. Dana is the brains of the team, she said, being a good problem solver, and Dodge is the brawn.

She talks to them while driving them off the dirt path onto the paved roads of the campus. And she also talks back, explaining the thoughts they are communicating to her in the voices she has assigned to the two.

“I have a really bad habit of anthropomorphizing the s*** out of animals,” Dougherty said.

However, she said horse psychology is important to understand and can be helpful when working in a team with the powerful animals.

Dodge’s voice is low and a little goofy. He is still a kid, Dougherty said, curious of the unknown but also a little scared and hesitant. She said she is working on his confidence.

With both being new to the campus, she is working on teaching them to trust her when they encounter what she refers to as “horse fright sights.” These can be anything from motorcycles driving by on the road to a trash bag blowing in the wind.

At one point Dana slowed down before the white crosswalk lines painted on the road, trying to step over it, not on it. Dougherty had her step right on the line.

Traveling back on the footpath by the shore of Lower St. Regis Lake, they encountered another fright — a towering, inflatable pink flamingo drifting in the water at the dock. Dougherty brought Dana and Dodge to a halt, letting them assess the situation and understand that even if they didn’t like it, she was bringing them to stop there.

When the students began to push the colossal bird into the lake, Dana got antsy and started pacing backward, which set off Dodge. They began to panic, but Dougherty brought them back with calls of “Come up,” “Whoah” and “And back.”

Her voice rose, but she was not shouting. She had to convey confidence and authority, or Dana and Dodge would have backed the fore cart right into a tree. They got the message, and she guided them back in place where they had stood before.

She had them stand there for a minute more before directing them onward. She said if she had let them “get away” from the threatening flamingo, they would remember that and possibly take off when spooked again in the future. Because she held them there and let them trust her that there wasn’t a threat, they will trust her again in the future.

Dougherty said she has confidence in Dana and Dodge to be able to pick up the job of college draft horse team, saying they have a gentle demeanor and good health.

“These two have handled it with lots of grace. I’ve been very impressed,” Dougherty said. “It just goes to show that they come from very great training. George and Nathan Poole have done a really great job with these two.”

She said that their performance also speaks to their intelligence and physical strength.

“They are athletes,” Dougherty said. “We ask them to do things that otherwise tractors and trucks and big rigs do, so it’s really important that they’re in shape.”

Dougherty said she has had many different people of different experience levels interact with Dana and Dodge, some with no experience at all. Freshmen will work with them in the fall semester. And in the meantime, the pair are getting used to the North Country black flies.