Astrophotographers travel to the Adirondacks for Milky Way photo shoots

Hiking partners Thomas Lizzio and Patti Pastella, pictured, camped out on the summit of Ampersand Mountain to take photos of the stars and sunrise. (Provided photo — Thomas Lizzio)

Astrophotographer Daniel Stein photographed the Milky Way from Mount Jo and combined it with a photo he had taken of the landscape better lit. (Provided photo illustration — Daniel Stein)

Astrophotographer Daniel Stein photographed the Milky Way from Giant’s Nubble on Memorial Day weekend and combined it with a photo he had taken of the landscape with better lighting. (Provided photo illustration — Daniel Stein)

The Milky Way shines over the Seward Range and other Adirondack peaks from the top of Ampersand Mountain, with light from one of the nearby villages illuminating the horizon. (Provided photo — Thomas Lizzio) 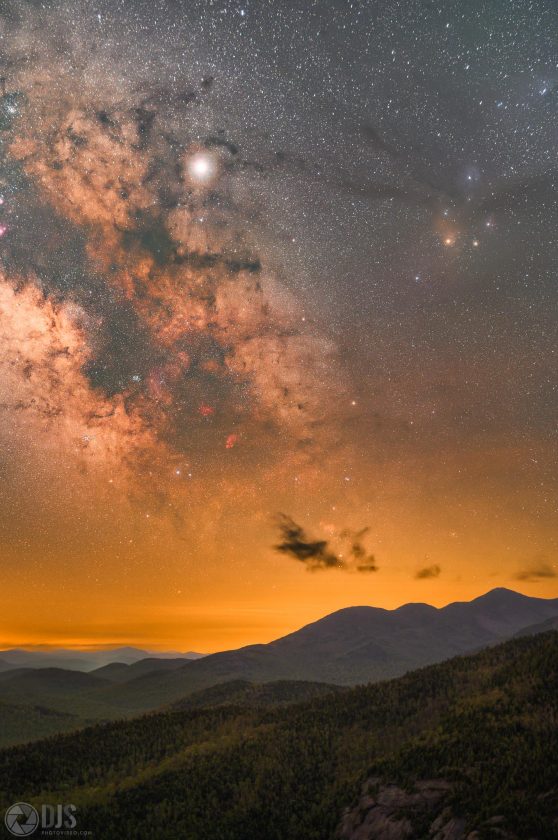 Astrophotographer Daniel Stein photographed the Milky Way from Giant’s Nubble on Memorial Day weekend and combined it with a photo he had taken of the landscape with better lighting. (Provided photo illustration — Daniel Stein)

Every year the Adirondack Mountains attract tourists from around the world for their renowned hiking and camping opportunities, but in the past month, several have hiked them with a different purpose in mind: photographing the Milky Way.

On clear nights, far away from the light pollution that covers most of the East Coast, our galaxy is visible to the naked eye. But with special cameras, lenses and photography technology, these photographers are able to capture an even more complete picture of its vast density. 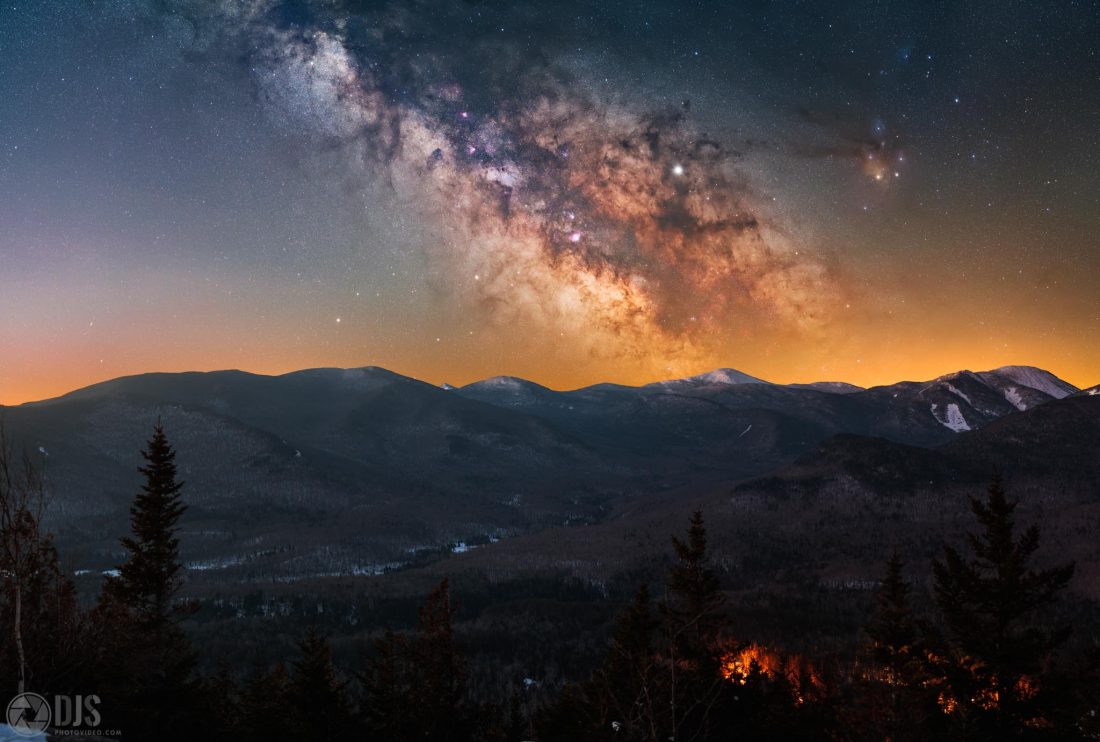 Astrophotographer Daniel Stein photographed the Milky Way from Mount Jo and combined it with a photo he had taken of the landscape better lit. (Provided photo illustration — Daniel Stein)

Daniel Stein hikes with a heavy pack: a camera, lenses, a tripod and a star tracker as well as all the gear needed to hike a mountain at night.

“People ask me, ‘Why is your backpack so big?’ and I say, ‘because I’ve got a lot of things to do up there,'” Stein said.

Stein traveled from his home in New Jersey to hike Giant’s Nubble over Memorial Day weekend.

“I wanted something more of a challenge than the Catskills offered as well as — for photography purposes — darker skies,” Stein said. “Coming from where I’m from, it’s night and day. Night and night, really.”

He said he enjoys hiking with a purpose. He likes being the only one on the trail after the sun sets. He enjoys doing something unique. And he remains focused on the journey as the destination. 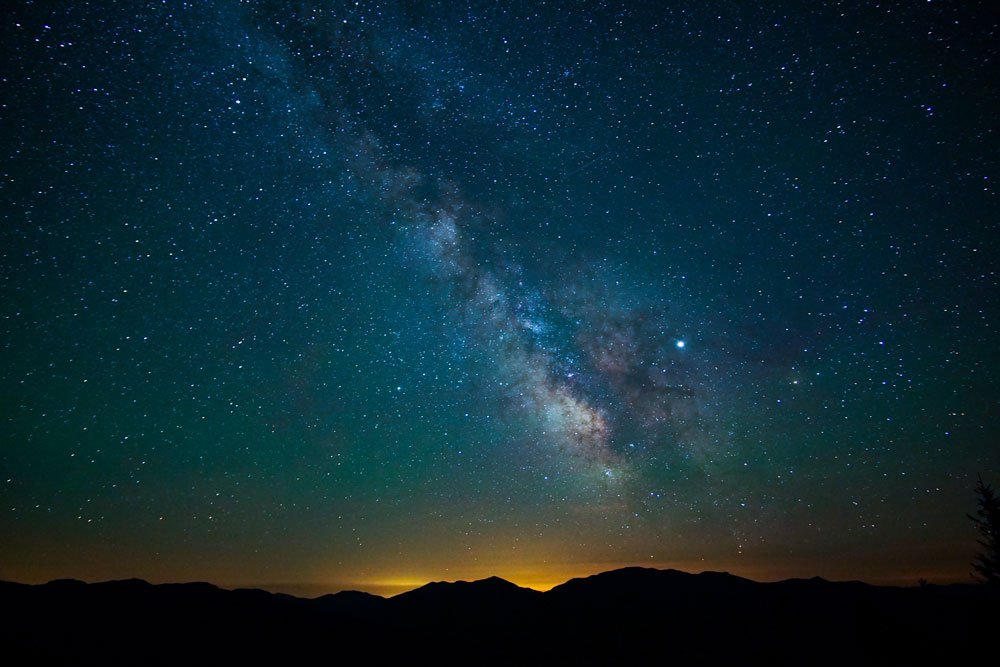 The Milky Way shines over the Seward Range and other Adirondack peaks from the top of Ampersand Mountain, with light from one of the nearby villages illuminating the horizon. (Provided photo — Thomas Lizzio)

“The views and the pictures are great, but I really do enjoy the actual hike,” Stein said. “I need a little bit of a challenge when I hike. If it’s too easy … come on. I like when I have to get in the zone, take some deep breaths, really focus on my pace and get into it.”

Stein works full-time and can only hike on the weekends. Astrophotography is a weather-dependent activity, so he was thrilled that this spring has offered more clear, dry weather than last year did.

Stein has hiked and photographed the Milky Way from Mount Jo, Cascade Mountain and Giant’s Nubble. He hikes in at sunset and hikes out at sunrise, spending the entire time in pitch black on a relatively empty mountain.

“There’s a eerie feeling to it,” Stein said. “It’s dark. You’re hiking by headlamp. You’re always turning around to see if someone is coming.”

GPS is crucial to navigating in the dark, he said, as trails and trail markers can get lost at night. 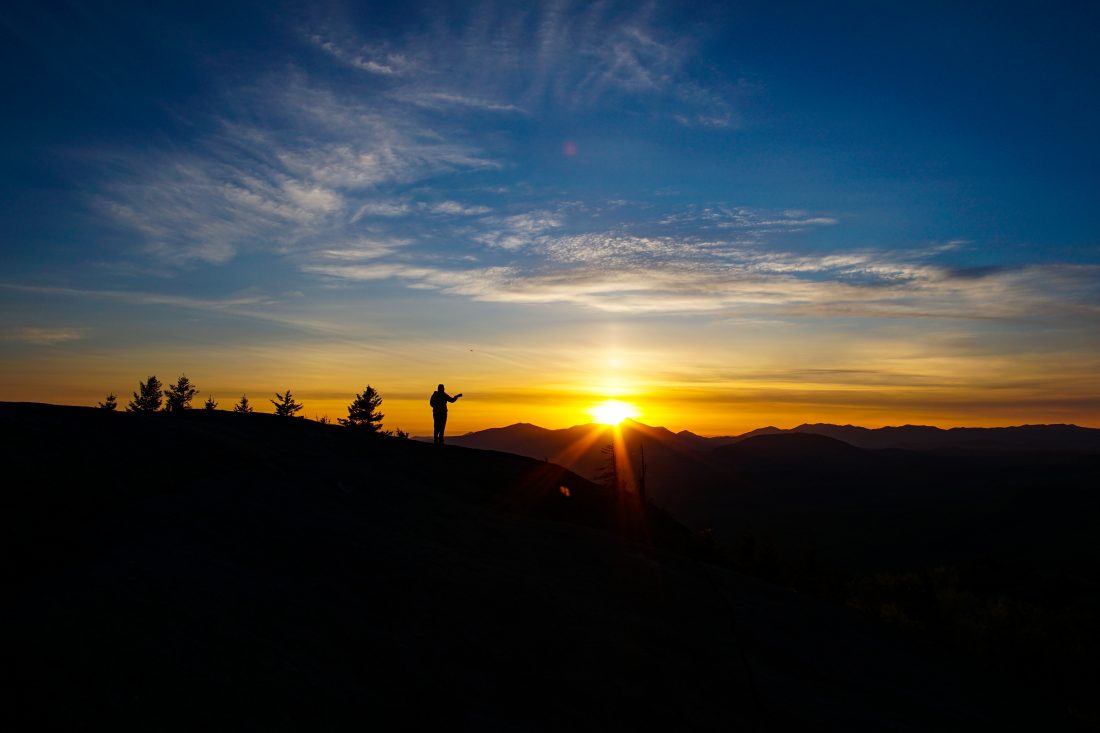 Hiking partners Thomas Lizzio and Patti Pastella, pictured, camped out on the summit of Ampersand Mountain to take photos of the stars and sunrise. (Provided photo — Thomas Lizzio)

Stein said astrophotography is taxing on his gear. He uses a Nikon Z6 camera that was modified by a third party to remove a filter, making it more sensitive to the H-alpha wavelength of light, increasing the red hue given off by nebulae.

“I hate telling people, ‘You have to have this type of camera and this type of lens,’ but for astro, a lot of that is true,” Stein said.

In his mind, the most important piece of equipment for astrophotography is a star tracker, a device that slowly rotates the camera at the same speed as the earth. He said it will even make a cheap camera produce good photos, but it requires a bit of basic knowledge in astronomy.

Stein has been taking photos since childhood and got into astrophotography in 2012 when he worked as a staff photographer at the John C. Wells Planetarium at James Madison University. He said the directors, professors and fellow photographers there encouraged him, critiqued him and pushed him forward to find new ways to shoot the stars.

Stein’s photos include colorful illuminations of the High Peak mountain ranges below the Milky Way. He achieves this by overlaying two photos in post-production. He said after he takes his first photo of the stars, he immediately switches off the star settings and takes a second exposure of the landscape to get an organic overlay. He modifies the photos in the astrophoto image processing program Pixinisght, reducing visual noise as well as bringing out more data in the Milky Way core.

Stein plans to return the Adirondacks on June 28 for the new moon. The week after he took photos here, he was on vacation in Colorado taking photos of the mountains and nighttime views there.

“The cool part about being in America is that we have states that offer something that’s always different,” Stein said.

He said he hopes his photos inspire others to try astrophotography, especially in coordination with hiking, and wants them to do it safely and without damaging the environment.

Thomas Lizzio and Patti Pastella started their hike up Ampersand Mountain when everyone else was coming down. Hitting the trail at 7 p.m. on June 8 they saw their last hiker after 15 minutes on the trail and spent the rest of the night alone, by themselves, with the stars overhead.

Both are 46ers twice over: once in the summer and once in the winter. They met while working at the Onondaga County Department of Water Environmental Protection, a sewage treatment plant for the city of Syracuse, before Pastella moved to Wanakena. She said she endures a 75-mile commute to work in Rodman just so she can live in the Adirondack Park.

“Best thing I ever did,” she said.

They have been hiking together since around 2007 and Lizzio always has taken a camera with him on the trail. He said he likes to look back on the sights, big and small, that he’s seen on the trails.

“A lot of people hike, but they don’t take the pictures,” Lizzio said. “I am always taking pictures. A lot of the people that (hike) with me are like ‘What are you doing?’ because I’m constantly stopping.”

Pastella said she does not mind. She is patient and used to the stops.

Around three years ago, he started getting into astrophotography, admiring the photos others have taken of the Milky Way, constellations and far-off planets, and wanting to take some of his own.

The pair summited the bare rock at the top of Ampersand’s 3,352-foot peak around 10:30 p.m. and were met with perfect conditions: clear sky and just a sliver of moon. Lizzio said the Milky Way was visible to the naked eye, but he wasn’t done. He found the heart of the Milky Way due south over the Seward Range, set his Sony A6000 mirrorless camera with a 12mm Rokinon lens on a tripod, and after a 30-second exposure he had unveiled millions more dots of light in the sky.

As Pastella set up her sleeping bag and caught a bit of sleep, Lizzio took photos throughout the night, around 50 in all.

Eventually he laid down in his bivy sack to stargaze, but he did not get much sleep.

“I don’t think I got any, to tell you the truth,” Lizzio said. “I probably laid in my sleeping bag for a couple hours, but I don’t think I really fell asleep.”

They were both up at 4 a.m. to wait for the sunrise, and after snapping some daytime pictures they got back to the car by 8:30 a.m.

Lizzio said he has also gone on astrophotography hiking trips on Mount Jo, Whiteface Mountain, Balanced Rocks on Pitchoff Mountain and the Azure Mountain fire tower. Some of these trips, including Whiteface, were night hikes with no mountaintop camping.

“I love the night hiking. There was nobody there,” he said of Ampersand. “Pretty much everywhere in the High Peaks is overcrowded nowadays. We were the only ones going up. We had the whole mountain to ourselves.”

“You get a different perspective. We’re learning how to identify Dannemora correctional facility, because off in the distance, you can see lights,” Pastella said. “From Ampersand, we could see Ray Brook. You usually wouldn’t see those during the day. It’s amazing how close they really are.”

The two are preparing for a trip to hike the High Sierra in California in August.