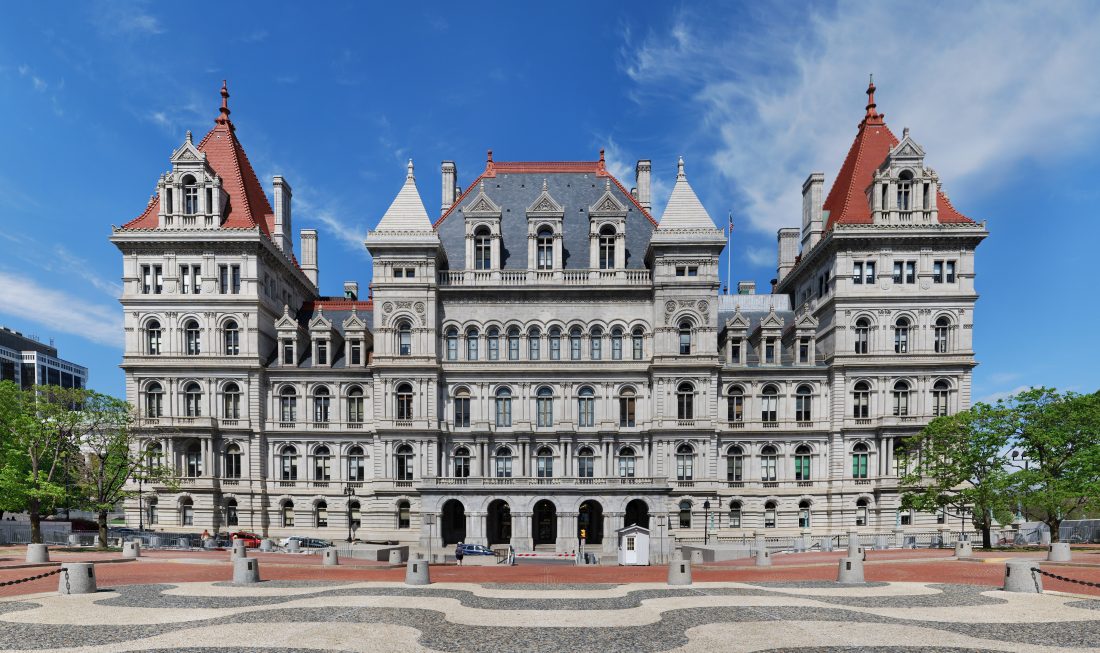 The New York state Capitol in Albany is seen in 2009. (Photo provided — Matt Wade via Wikipedia)

ALBANY — New York would adopt the nation’s most aggressive carbon emission reduction goals and give new rights to farmworkers under proposals moving through the state Legislature Wednesday.

With the session scheduled to end Wednesday, lawmakers planned to work through the night to wrap up work on hundreds of bills.

Efforts to legalize marijuana, however, fizzled Wednesday as lawmakers conceded they didn’t have the votes. Instead, lawmakers said they might vote to eliminate some criminal penalties for smoking marijuana in public and create a way for people to expunge past pot convictions from their records.

Here’s a look at the latest legislative action:

The measure, expected to pass the Assembly on Wednesday or Thursday, would also mandate an 85% reduction in carbon emissions by 2050.

Once adopted, the targets would give New York the most aggressive renewable energy goals in the nation.

FARMWORKERS: Legislation allowing farmworkers to collectively bargain and collect overtime after 60 hours of work per week passed both chambers after several hours of debate.

Supporters said farmworkers deserve the same rights and protections as other workers. The bill would also give farmworkers other labor benefits, such as a mandated day of rest each week.

Last month, a mid-level appellate court ruled that farmworkers should have the same right to unionize as any other worker.

SEXUAL HARASSMENT: The state’s legal standard for sexual harassment would be tweaked to make it easier for victims to bring harassment claims in court under a bill that passed both the Senate and Assembly.

Specifically, the bill would eliminate a standard in state law that misconduct must be “severe and pervasive” in order to be considered harassment. Supporters say the change will help victims get justice through civil lawsuits.

“With the passage of this bill, we will make it easier for claims to be brought forward and send a strong message that when it comes to sexual harassment in the workplace, time is up,” Cuomo said in a statement.

Lawmakers also voted to eliminate the statute of limitations for second- and third-degree rape. The change would not apply retroactively.

Lawmakers then turned their attention to a more modest bill that would eliminate some existing criminal penalties for possessing marijuana in public. The new proposal would also create a process for people to expunge past pot convictions from their record. A vote was expected late Wednesday or Thursday.

GAY PANIC: Both chambers approved legislation that would ensure people who attack or kill a gay person can’t beat the charge by arguing they panicked because of their victim’s sexuality.

Under current law, defendants can attempt to excuse violent attacks by arguing they were under extreme emotional distress. The bill states that the so-called “gay panic” defense cannot be considered a “reasonable explanation” for a violent crime.