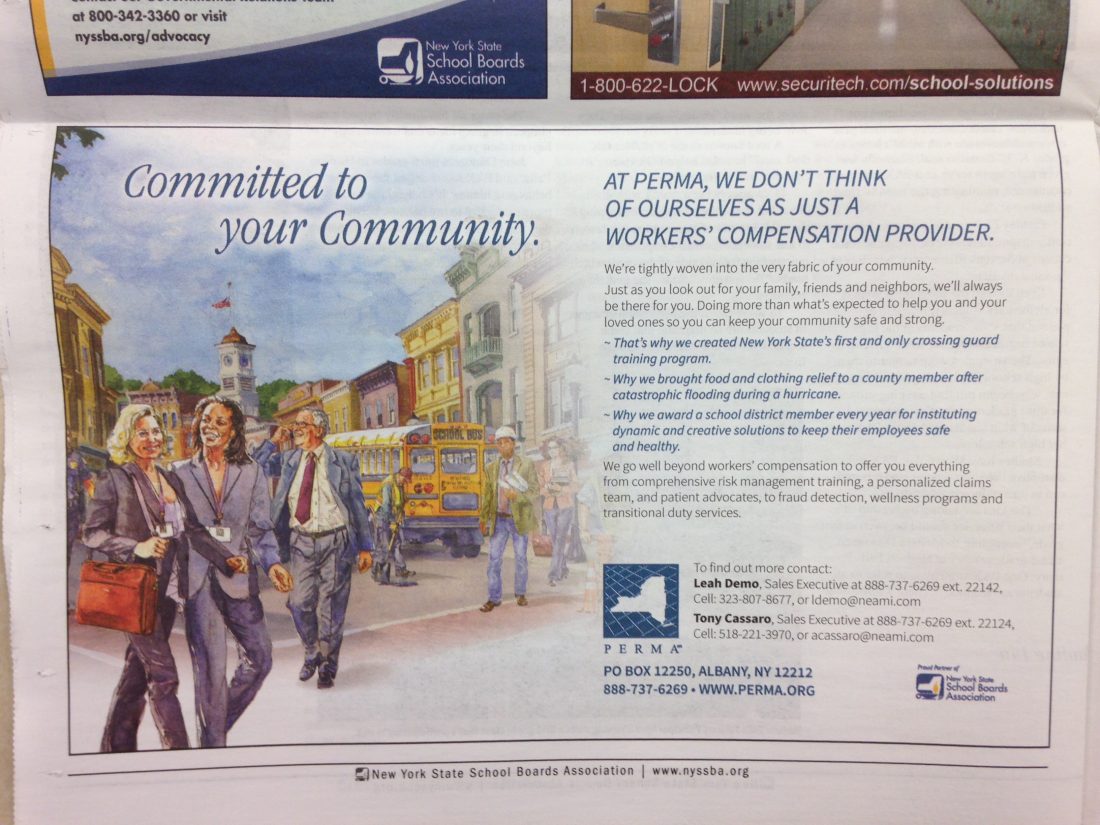 Saranac Lake appears to be the model for the downtown depicted in this ad for Perma, a workers’ compensation insurance provider, as seen in the June 10 issue of On Board, the newspaper of the New York State School Boards Association. (Enterprise photo — Peter Crowley)

SARANAC LAKE — The downtown setting looks familiar in an ad intended to bring out the neighborly spirit of a workers’ compensation insurance provider.

Except for a few notable changes, the painting depicts downtown Saranac Lake, seen as one looks down Main Street toward the town hall from Berkeley Green. People engaged in supporting Saranac Lake’s downtown were excited to see that someone thought it looked nice enough to put in an ad.

Perma, a workers’ compensation insurance provider, uses the image on its homepage, business cards and brochure as well as its ads in New York newsletters and publications. Marketing Assistant Leah Demo said Perma commissioned Albany artist Dahl Taylor to paint the image for its rebranding, asking him for something in line with its tag line, “Committed to Your Community.” She said the insurance provider wanted people to see it as approachable and caring, like a neighbor in a small town.

“We just wanted to do something that was really grassroots and homey,” she said.

Demo said the image includes buildings from downtowns all over New York state — but Saranac Lake is clearly the main template.

The gentle leftward curve of the Main Street in the ad is one indication, but some of the buildings are dead giveaways. On the left is the Coulter Block’s distinctive yellow-trimmed facade and cornices, and across from that, without a doubt, is the building that has housed T.F. Finnigan’s menswear shop for almost a century, its gray stone facade punctuated by the same green trim and balcony. Next to Finnigan’s is the former Enterprise office that now houses a cafe and bike shop — windows enclose its balconies in the ad, but the cornice is the same. Next door the artist has inserted another building to replace the blank brick wall facade of the former Key Bank, but beyond that the Main Street Salon, Adirondack Bank and China Jade buildings look just like they do in real life.

The town hall clock tower is different — white, wooden and square instead of red, brick and round — but it’s in the same spot where the Harrietstown Town Hall rises over Saranac Lake’s downtown.

Even the crosswalks, where smiling professionals with lanyards cross Main street in the ad’s foreground, are where they are in Saranac Lake.

“The resemblance is uncanny,” Saranac Lake Area Chamber of Commerce director Patrick Murphy wrote in an email after being shown the ad. “I know for a fact that there ha(ve) been a number of teacher association and board association meetings that have occurred in the (T)ri-(L)akes area over the past few years. Our downtown must have stood out!”

He credited business people, volunteers and village staff for making the area look like “a vibrant downtown on the rise.

“It’s no wonder Saranac Lake could be seen as a model for the active and engaged community,” he said.

Tim Fortune is a painter whose art gallery is at the pictured intersection of Main Street and Broadway. He’s also a Saranac Lake native and head of the local Downtown Advisory Board.

“The energy depicted, by an artist, in the watercolor is fitting because of our growing arts community,” Fortune said of the ad. “There are Art Walks, a Plein Air Festival, Artist Studio Tours, Music on the Green and new events such as the Street Fest and Northern Current music festival all in the downtown area of our village.”

Taylor, the artist, said by email that he used Saranac Lake as a base “but brought in other buildings to make it more of a generic town. It is a lovely Main Street and similar to the town I grew up in (Waterford, NY) the town hall steeple is from Waterford, in fact.”