Artist Janet Millstein stands before her work “Ghost Home,” on display at the Lake Placid Center for the Arts tomorrow through July 28. (Enterprise photo — Elizabeth Izzo) 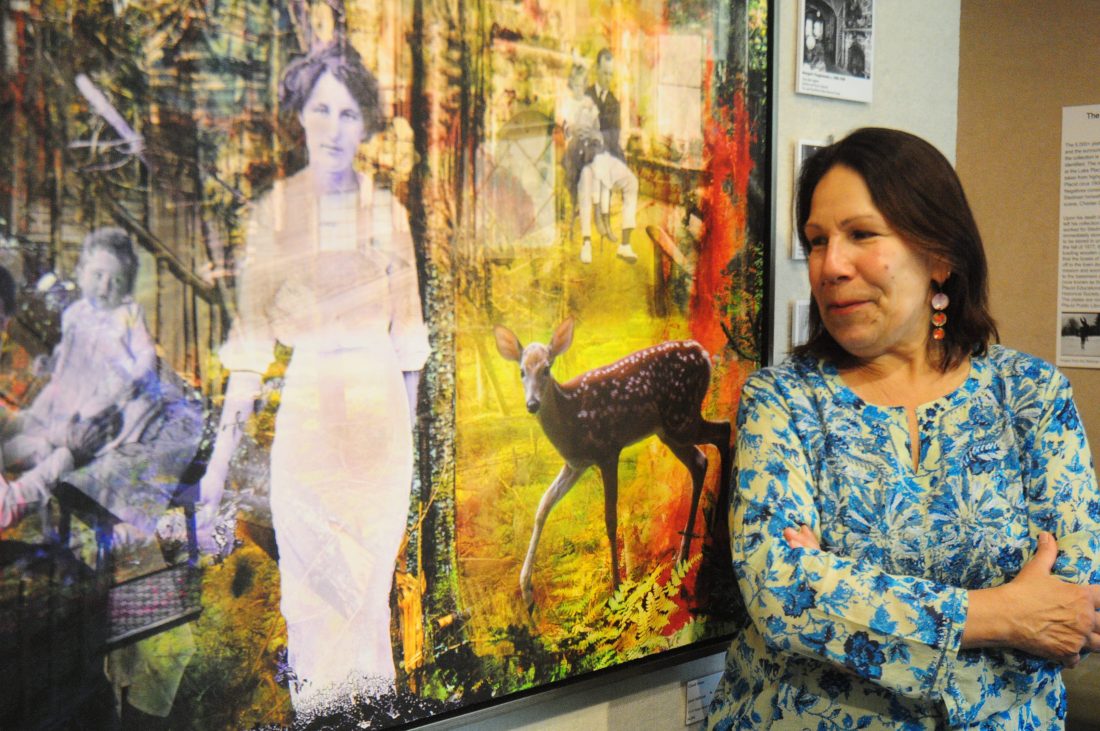 Artist Janet Millstein stands before her work “Ghost Home,” on display at the Lake Placid Center for the Arts tomorrow through July 28. (Enterprise photo — Elizabeth Izzo)

LAKE PLACID — A woman in a floor-length dress, her hair spun in a careful updo, stares directly at the camera lens.

Her lips are frozen in a permanent smile, her hand forever affixed inside her pocket. Her name and the details of her life have been lost in time.

But this moment — her, drenched in sunshine against a backdrop of blooming hydrangeas — stands as evidence that she was here. Somehow, this piece of her remains.

This black-and-white photograph, labeled simply “large woman with hydrangeas,” is one of more than 60 that have been given new life by Janet Millstein, a multimedia artist and part-time resident of Lake Placid.

Millstein has transformed the woman’s portrait by layering colorful, eye-catching details. Modern photographs of natural elements augment what’s already made mysterious by the passing of time. 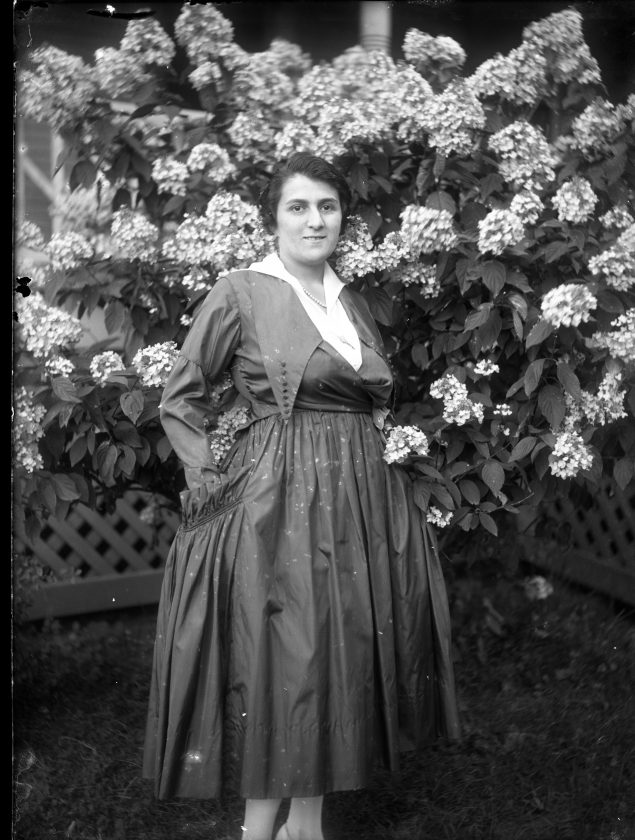 “The photographs are exploding with new energy and color,” said Alison Simcox, marketing director for the LPCA.

Millstein combined her eye for nature photography with her passion for painting and printmaking to create “Imagined Reflections,” an exhibit that sheds new light on the rich history and landscape Lake Placid.

Paying tribute to the past

“Imagined Reflections” was made possible through a collaboration between the LPCA and the Lake Placid-North Elba Historical Society. It all started in a basement more than six years ago.

Glass plate negatives, some 6,000 of them collected by photographer Irving Lynn Stedman over his lifetime, were saved from being thrown away by World War II field surgeon and beloved Lake Placid physician Dr. George Hart back in 1977. The negatives chronicle everyday life in the village before and after its first Olympic games in 1932, from around 1898 to 1940.

Hart gave them to the LPCA, where they sat in a box in the basement until a few years ago, when the historical society purchased them.

The negatives were dubbed the Stedman and Moses Collection and preserved for the eyes of future generations.

The two organizations, with the LPCA’s Gallery 46, recruited Millstein to bring the photographs into the spotlight again.

For a week last September, Millstein pored over the thousands of negatives. There were so many that she didn’t even know where to start.

“Some images just screamed at me,” she said.

She left with her chosen images and spent the next nine months creating “Imagined Reflections.”

The “large woman with hydrangeas” spoke the loudest, and that’s the piece that she worked with first.

Millstein created entire scenes around some images. Others, a series of portraits like the woman’s, remained portraits.

“I became obsessed with it, in it,” she said. “I felt like I knew these people, like I was knowing them.”

It was often the women that entranced her. A mother who sometimes struggled to balance her business life with her personal life, Millstein wondered how these women in the past might’ve navigated the world they lived in.

“What is she thinking?” she said, looking at an image of a woman sitting in a canoe alongside a young boy and a man, both dressed in suits. “Is she happy? I’d imagine these things.”

After nine months, these photos and her own work to create something new, she emerged with a greater appreciation for the people memorialized in them.

“Imagined Reflections” is opening at the Lake Placid Center for the Arts Thursday night. An opening reception is set for 5 to 7 p.m. at the LPCA Gallery. Violinist Elaine Dewar and cellist Esther Rogers Baker are set to perform. Admission is free.

The exhibit will be on display every Wednesday through Saturday from 1 to 5 p.m. through July 28.