Workers back on the job at resort site 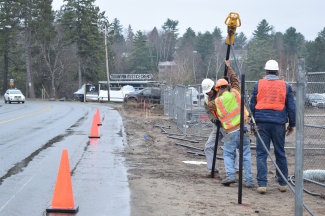 Contractors lay in fence posts for a tougher fence around the future location of the Saranac Lake Waterfront Resort on Wednesday. (Enterprise photo — Jesse Adcock)

On Monday, the task was just to install a heavier fence around the project, but village Code Enforcement Officer Patrick Giblin said he’s in the process of reviewing a permit for foundation work for the resort. He said he still has to coordinate a little with the resort before issuing the permit but expects to issue it in the near future. He also said he expects a fuller set of plans for the whole project soon.

No representative from the resort could be reached by press time.