Camping to reopen at historic landmark, small-scale at first

Eagle Island Camp Director Katrina Dearden packs a pine-needle brick into a debris survival structure. Making this kind of shelter is one of the wilderness survival tools campers will be taught in July. (Enterprise photo — Aaron Cerbone)

Katrina Dearden, left, and Paula Michelsen are two of the people who have been preparing Eagle Island for its first round of campers in years. (Enterprise photo — Aaron Cerbone) 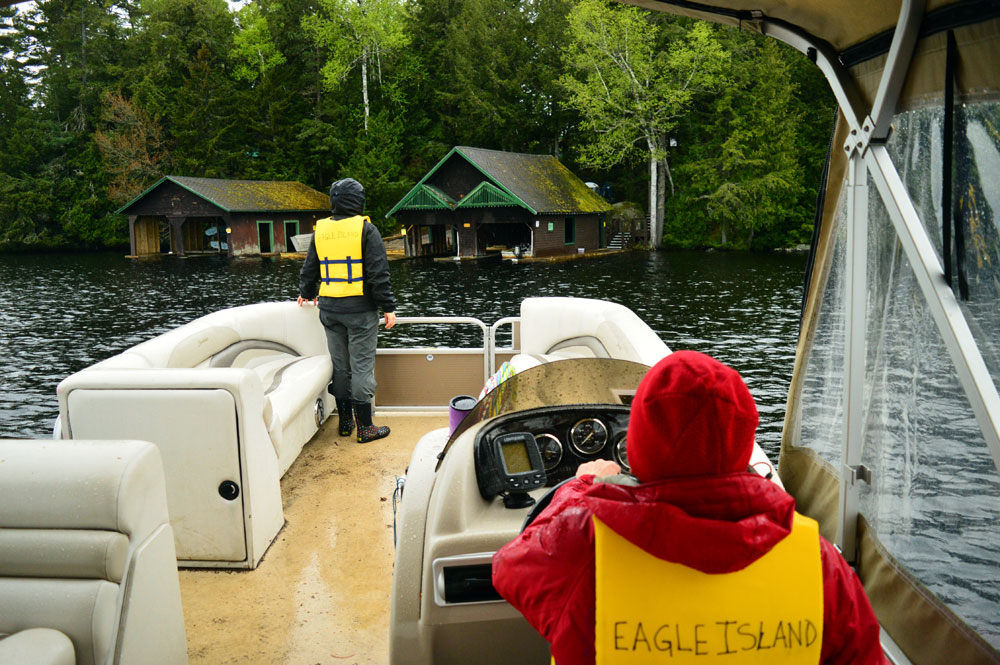 UPPER SARANAC LAKE — A crew of six ponchoed volunteers waited in the rain on the dock of the east shore of Eagle Island, carrying half-emptied packs of food, clothes and necessities for several overnights on the island. But they weren’t campers, at least not the traditional kind.

They had just finished a weekend of work on a renovated former Girl Scout camp and were ready to board the pontoon boat back to the mainland.

Some had first camped on the island as Girl Scouts. Some had learned about the secluded island camp when their daughters went there for retreats. All were there to make sure the camp is enjoyed for generations to come.

Eagle Island Camp has a history dating back to 1903 but has been out of use since 2008. Now, after nearly four years of work, a group of volunteers has prepared the 30-acre island for campers to again swim, sail and socialize in the middle of Upper Saranac Lake, starting in July. 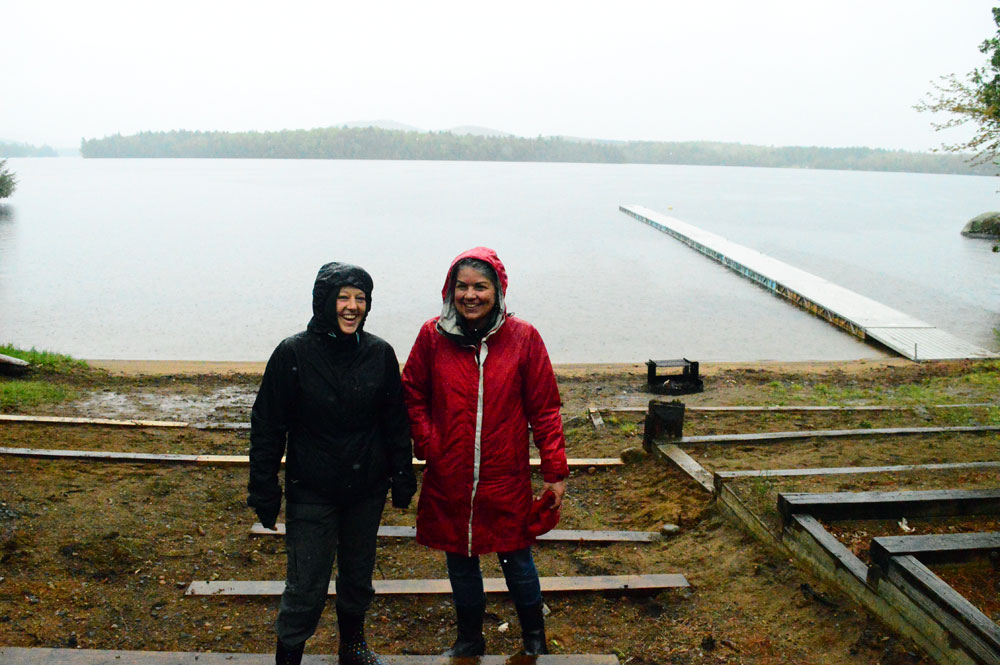 Katrina Dearden, left, and Paula Michelsen are two of the people who have been preparing Eagle Island for its first round of campers in years. (Enterprise photo — Aaron Cerbone)

The camp is no longer Scout-related. Now it’s coed and is for students entering fourth, fifth and sixth grade. And while it will be an overnight camp eventually, for this year at least, it will be a day camp.

The first week of camp on the island starts July 22, and there are still openings.

Camp Director Katrina Dearden said there are several registrations from Lake Placid and Saranac Lake, and she hopes to get more from those communities and especially Tupper Lake. 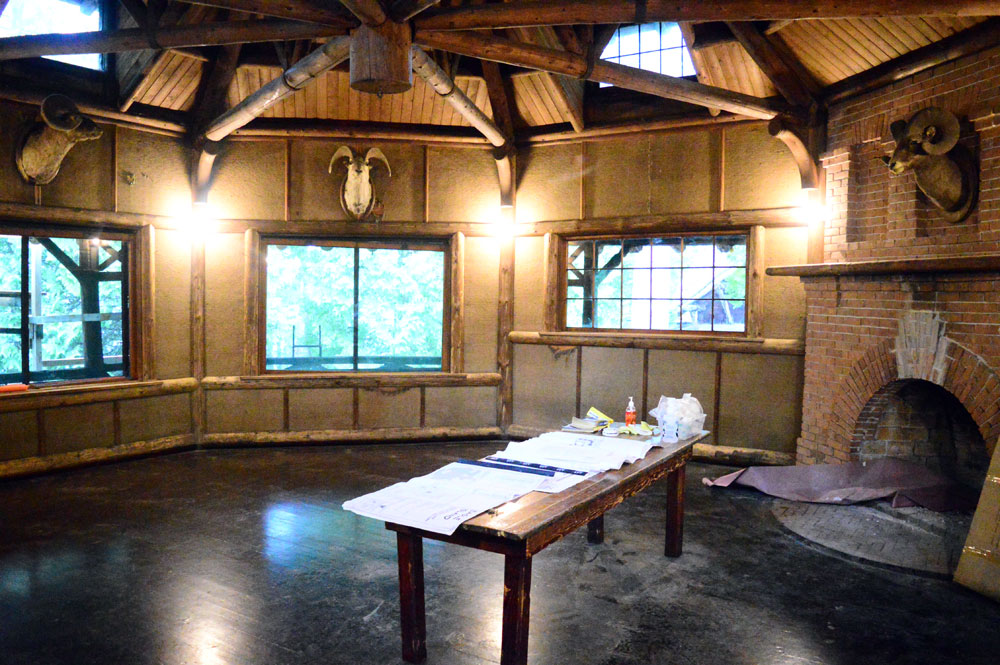 There will be two one-week sessions with 30 campers each. Dearden said there are currently 15 unique campers, with some attending both weeks. She said she has designed the curriculum to be unique each week, so returning campers will not do the same things twice.

Eagle Island Inc. Executive Director Paula Michelsen said the plan is to expand the camp each year, becoming an all-day camp in 2020 and opening up its 37 platform tents the next year.

The island can house up to 140 campers.

The island is ringed by a mile-long footpath leading from the boathouses to the recreation area, the impressive and large main building, a beach, the numerous platform tents and back around to the start again.

Campers will do many of the same things the Girl Scouts did when they camped on Eagle Island: Learn how to build shelters, start fires and sail. 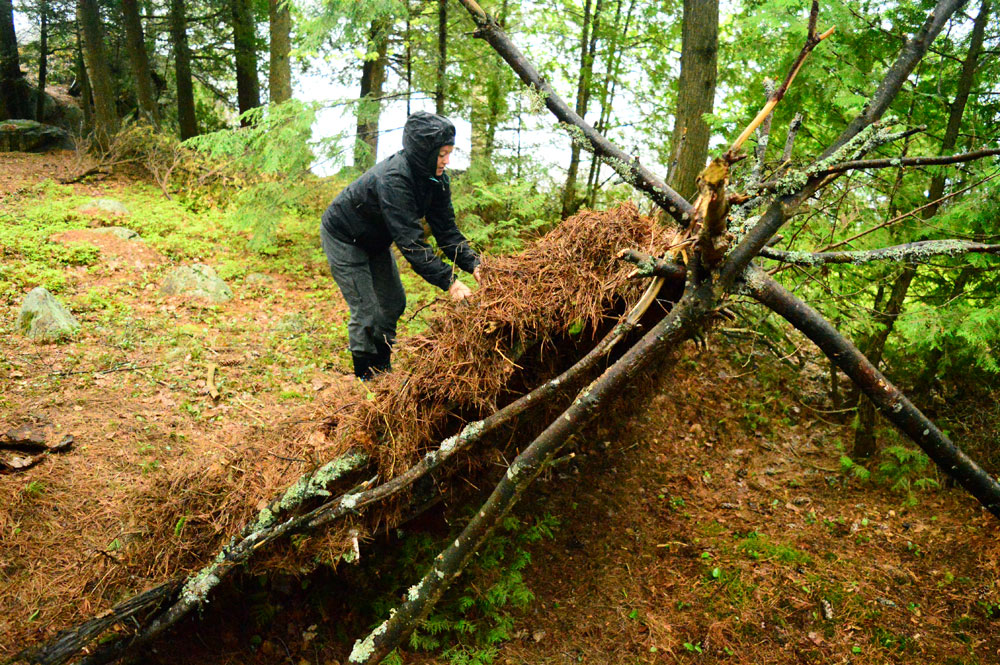 Eagle Island Camp Director Katrina Dearden packs a pine-needle brick into a debris survival structure. Making this kind of shelter is one of the wilderness survival tools campers will be taught in July. (Enterprise photo — Aaron Cerbone)

Michelsen said she learned to sail when she camped on the island as a Girl Scout. Her daughter also camped at Eagle Island the last two years the Girl Scouts operated it. Michelsen was one of the Girl Scout alumnae who made up the initial Friends of Eagle Island Inc. board that was started in 2011, but had been involved with looking toward the future of the camp from its closing in 2008.

“When it closed, some of us who are currently on the board … were asked to be part of a task force for the Girl Scouts, looking at how else it could be economically viable,” Michelsen said. 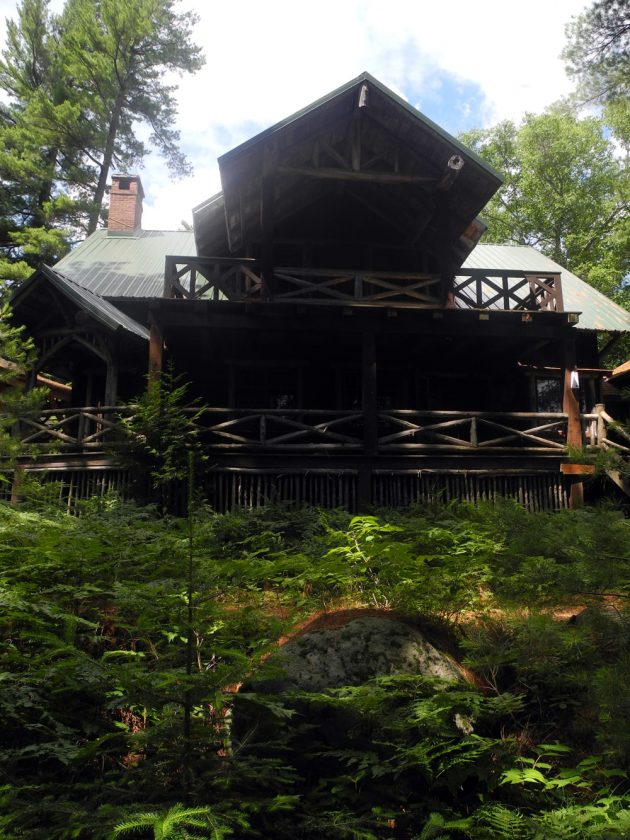 She said her original goal was to help the Girl Scouts reopen the camp, but when that didn’t work, she focused on opening the camp to operate in much of the same way it had before. The group became a 501(c)(3) nonprofit organization in 2011, and after a lot of fundraising and one big anonymous donation, it was able to purchase the island from the Girl Scouts Heart of New Jersey Council for $2.45 million in November 2015.

“I mean, it does give you chills when you think about all the steps that we had to take to get to this point,” Camp Eagle Island alum Lee Ann Miller said. “It’s super-exciting.”

The Girl Scouts had operated Camp Eagle Island continuously for 70 years, from 1938 to 2008. The property was originally developed by Levi Morton, former New York governor, U.S. representative and vice president under President Benjamin Harrison. It first opened in 1903.

The intricate wooden buildings were designed by architect William L. Coulter. The National Register of Historic Places recognized the camp in 1986, and in 2004 the property was named a National Historic Landmark. 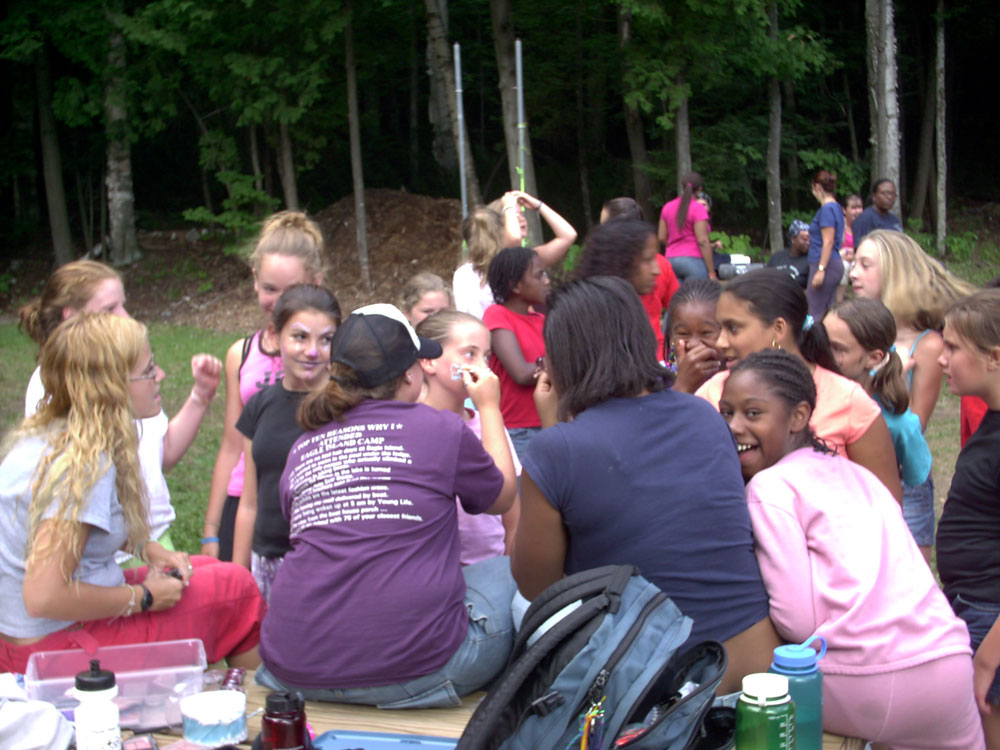 Over the Memorial Day weekend, 10 volunteers stayed overnight on the island and did lots of heavy lifting during the days to get the camp ready, with more volunteers coming in from the mainland.

Volunteers put the docks into place, set up tents and play structures, carried unnecessary items and garbage off the island, and brought some supplies that will be needed on. A tree that was a hazard to local boaters was dragged out of the lake. It was too heavy to bring on shore, so they cut it into portions out in the water and floated them in.

They brought an old boat for campers to play in or practice knots on to the play area where Dearden said she hopes to have giant Jenga game and a pit for Gaga, an Israeli version of dodgeball. Dearden also built an oversized debris shelter, which campers will finish up when they arrive before learning how to build ones of their own.

The shelters are made of tree branches and densely packed pine needle “bricks,” and are meant for emergency wilderness survival.

On top of their regularly scheduled activities, Dearden said campers will have unstructured downtime three times a day so they can get to know each other well.

“Overnight camp really helps build friendships, and all of that really happens during the downtime. At night, in the cabins when they’re chatting before bed, or free time after lunch,” Dearden said. “Day camp doesn’t have that as much, so we’re intentionally placing this downtime to develop that overnight camp bond of friendships without the overnight camp experience.”

She said while this is the downtime for campers, for the staff, it will likely be the most involved part of the day. Dearden said the camp has hired five staff members and will hire more before camp starts, wanting to reach an eight-to-one ratio of campers to staff.

She said staff from out of area will stay in the North Country Community College dorms and do staff training at the Saranac Lake Free Library with Director Pete Benson, who was the caretaker at Eagle Island for 30 years.

“Ideally, I would love it if every staff member was a lifeguard, because we are an island,” Dearden said.

Dearden previously worked as a camp director at Rock Hill Camp, a Girl Scout camp in Mahopac, Putnam County. She said she grew up camping, and when she learned she could be a camp director full-time she jumped at the opportunity.

“When this opened up,” Dearden said, “the chance to start a camp from zero, that also has such a rich history, that balance … I wanted to be here.”

The camp will be hosting a free open island day on Aug. 17 and people wanting to tour the island can register on the camp’s website.