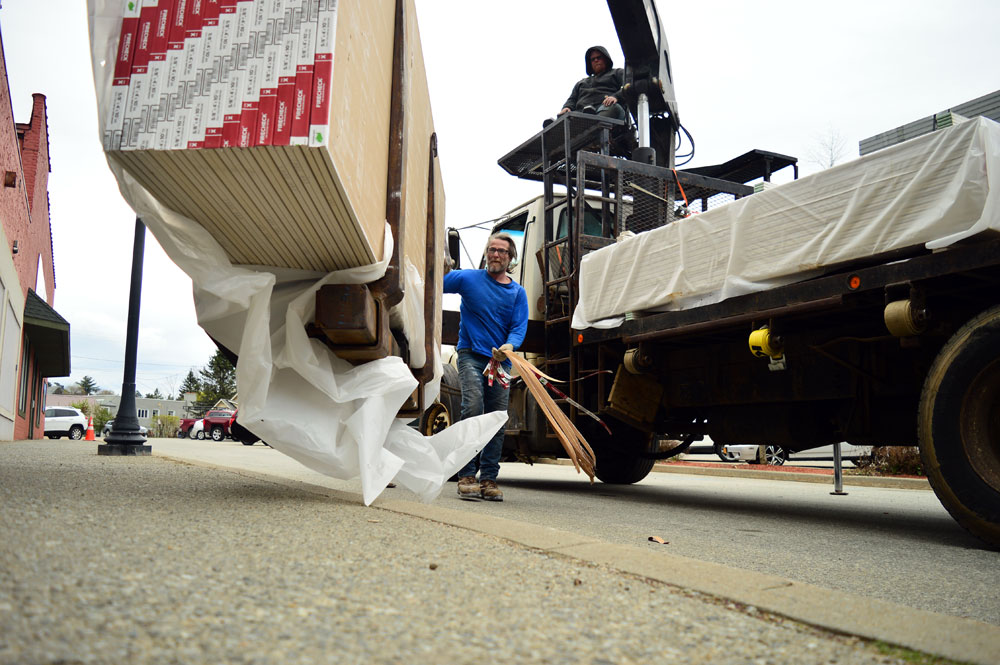 Dan Honan of Honan Contracting on Monday opens up a stack of drywall for installation in the former Newberry’s-Sears-Wholesale Furniture building in downtown Saranac Lake, which will soon be the new offices of Edward Jones Investments (Enterprise photo — Aaron Cerbone)

SARANAC LAKE — Construction started Monday on the storefront space in a large vacant downtown building next to the municipal parking lot.

The financial advisors at Edward Jones Investments, which will move its offices a short distance into that space in the next two months, said they are looking forward to expanding into the Main Street space that was most recently the home of Wholesale Furniture, and Sears and Newberry’s before that.

On Monday, crews from Randy Carter Construction and Honan Contracting started renovations on the space, moving in drywall and other supplies with a wallboard truck. Carter said he expects construction to take around a month-and-a-half.

Paolo Magro, a Saranac Lake resident who owns the building, said the new Edward Jones offices will occupy a 2,500-square-foot space, with two more units making up the total 7,000 square feet to be rented soon.

Edward Jones Investments advisor Matt Theis said the financial offices will more than double in size. Its current 1,100-square-foot space is a few doors down at 68 Main St., where it has been since it opened in 2001.

Theis said a new advisor, Rick Lyon, recently joined the three people already working there: himself, Pamela Jarvis-Dupree and Jessica King. He said Lyon will hire an assistant shortly and that they realized they need more room. King works at a desk nearly 10 feet from the door.

“Jess will actually have a space, so she won’t be up here freezing in the open,” Theis said.

Theis said he was glad to stay on Main Street, hopes the iconic corner is good for business and was happy to keep the office’s convenient parking.

Theis said the new space will allow them to do things like hold a “coffee club” in the atrium and have more than a dozen people in the office without it getting cramped.