The four coroners communicate more than before 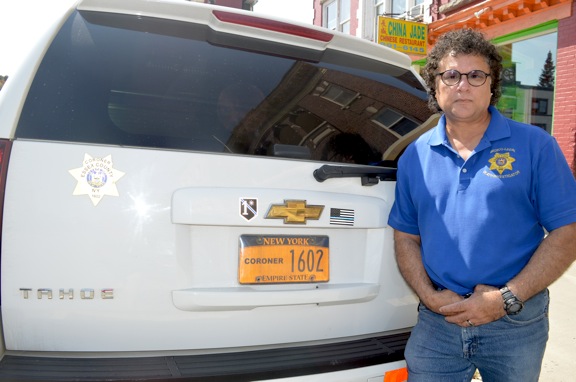 After Monday’s public hearing, the Essex County Board of Supervisors got a little closer to finalizing a law that would govern how the county coroners operate.

Many policies pertaining to coroner training, dispatch, stipends, documentation and body removal were already outlined in a proposal in February. However, some additions were made since then, and one coroner says practices and staff communication have increased significantly for the better in recent months.

Essex County Coroner Frank Whitelaw of Bloomingdale said he agrees with just about all of the proposal except for one part: Coroners would only transport bodies in the case of an emergency.

The proposal says, “It is recognized that Essex County coroners do not have the proper vehicles and equipment to safely and properly transport a body. The transportation of a body from the scene to a funeral home, morgue, hospital or elsewhere shall be done by licensed funeral homes contracting with Essex County only and not a coroner.”

Whitelaw said he thinks this will end up costing the county more time and money. He would prefer if coroners could continue to transport bodies. Because police have to remain at a scene until a body is transported, Whitelaw said relying on contracted funeral home directors could extend that wait time and possibly keep police from responding to other emergencies.

Technically, Whitelaw said, all the current coroners do have the proper means for transporting a body. Three of the four are funeral home directors with the right equipment: Jay Heald and Walter Marvin III, both of Elizabethtown, and Kellie Valentine of Moriah. Whitelaw, a retired state trooper, has his own vehicle capable of carrying remains. However, those are all personal vehicles, not provided by the county. Because the coroner is an elected position, it is possible that a person who doesn’t have the proper vehicle or equipment could attain the position.

“If this went into effect, I’d still go to the scene and make an official announcement of death, order and attend autopsies,” Whitelaw said. “We would not be transporting bodies, but our other duties would remain enforced.”

In a phone interview Friday, board chair and Willsboro Supervisor Shaun Gillilland said the details on transportation are currently being edited.

“We’re tweaking it to make sure it’s right, adding a little more latitude,” he said. “Essentially the state coroners law is not very specific, so that leaves a lot up to county in terms of what we can do. Essex County hasn’t really done that before, which led to perhaps a loss of confidence in our coroners and less oversight.”

The law would have Essex County Emergency Services dispatch the coroners based on whoever is closest to the death. If that coroner is unavailable, the emergency services would call the next closest. In a February meeting, county attorney Dan Manning said this will keep police departments and ambulance services from having a “pet coroner” — one they always call, despite time and location.

Coroners would have to notify Essex County Emergency Services and the other coroners in advance if he or she is going to be out of the area.

In the past, coroners didn’t have to log their calls. The new law would require coroners to record the date, the deceased’s name, cause of death, manner of death, location and other relevant information for each call, and those records would be filed with the county.

An introductory class is already required for every coroner in the state, but the new law would mandate county coroners pass other classes such as on blood-borne pathogens, mass fatality-casualty, synthetic opioid drugs and chain of custody. The county would pay for these courses.

There would be no stipend for body bags because they would be obtained by the county.

(Correction: An earlier version of this article incorrectly said the proposed law would reduce call and removal fees from $300 to $100, and omitted Whitelaw’s fee proposal.)

Concerns with the county coroners been brought up among the Board of Supervisors for more than a decade, but they came to a head in December when Whitelaw did an interview with the Enterprise, expressing how he thought the procedures and his co-workers’ sense of responsibility were less than ideal. Back then he referred to the other three county coroners as “lazy” and that they had “no work ethic,” saying he often had to respond to calls in areas of Essex County much closer to one of the other coroners. This was back when Paul Connery of Ticonderoga was still a coroner. Heald filled that spot this past election.

Both Whitelaw and the Enterprise received a mix of support and backlash from the article, which seemed to have sparked some change. In a previous interview, Gillilland said, “A lot came together recently. Between the elections and (Enterprise) articles, it’s been pushed to the forefront. It’s been recognized as a problem for a number of years, and now we’re addressing it.”

Whitelaw said his working relationship with the other coroners has improved significantly in recent months.

“There was one call that was little farther away in December, but since then, I haven’t had to do any calls outside my area. Kellie has been busy going on calls. Jay responds to all his calls. Walter spoke up about a few similar concerns as me at the public hearing. We email a lot more, and I find myself staying in my normal coverage area.”

“(The coroners) are talking quite a bit more since we started working on the drafting of this local law,” he said. “You can still see some points of disagreement, but you don’t feel tension when they all get in a room together.”

Gillilland said he would like to get a new law on the books before the end of summer.