4,000-plus acre Boy Scout Reservation set to be sold

A 4,383-acre scout reservation has entered into contract to be sold near Long Lake.

The Cedarlands Scout Reservation, encompassing two lakes over 6 square miles of timberland, has been on the market since 2015.

Margie Philo, broker for the sale with Berkshire Hathaway, said the buyer is from New York near the Catskills area. She said he doesn’t have plans to build any large structures on the location at this time, but “just enjoy the nature of it,” Philo said. She was unable to disclose his name or the sale price at this time, but said she would be able to once the sale is finalized in August.

The land was listed for $3,795,000. Philo’s office listed the Cederlands in mid-June 2018, taking it over from another realtor who, she said, had the property listed for two years with no luck.

“A very lucky and privileged buyer from New York state is under contract to own this remarkable historic piece of the Adirondacks with two private lakes and three mountains,” Philo wrote in an email. 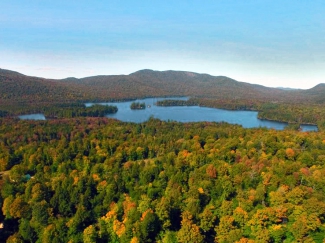 Philo said the property has been assessed to contain $2 million in timber value, with maple, birch, ash, spruce-fir and white pine sawlogs on the property. It includes two large bodies of water — the 400-acre McRorie Lake, as well the 60-acre Mud Pond.

The BSA acquired the property from Amandus Watts in 1963, according to Hamilton County property records. There’s more than 20 buildings on the property, with accommodations to sleep 35, as well as 10 seasonal tent seats that can camp 280.

Ray Eschenbach, scout executive and CEO of the Leatherstocking Council, the Boy Scout council which owns the land, said the market for camps in the Adirondacks was oversaturated. Compounding that was a decrease in the number of Boy Scouts, reflecting a population decrease in northern New York, Eschenbach said.

The main thing, Eschenbach said, is that the Cederlands was a council asset. He said the money from the sale will be used to promote the organization’s long-term health to provide camping and programming for scouts.

The Cedarlands Conservation Easement Tract, a partnership between the landowner and the DEC, has allowed seasonal public access in the past to some of the recreational features of the property. These include 6 miles of trails that traverse two mountains on the property, Mud Pond Mountain and Rock Pond Mountain. 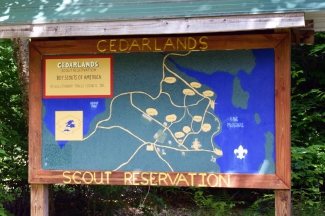