Owner’s timeline was too tight for permit review. Village officials’ proposed alternative — with River Walk but without restaurant-bar deck — was a non-starter. 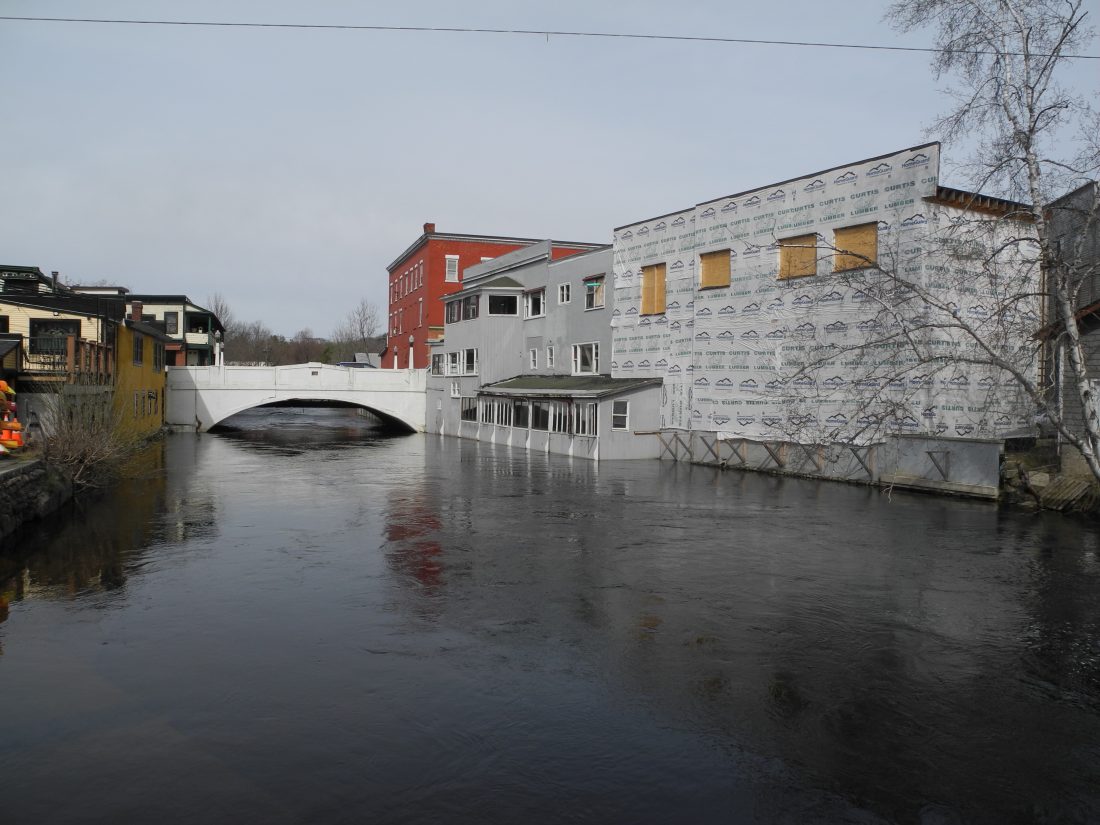 SARANAC LAKE — It is not clear that a question about the former Dew Drop Inn’s porches over the Saranac River caused the delay that led to the cancellation of the project. Before that question was raised, the timeline set by its owners to begin construction did not match the pace of the village’s code review process.

But for Chicota Inc. President Callie Shelton, which owns the local landmark, the fact that village code enforcement raised the question, and when they raised it, was enough to cancel the project to renovate 27 Broadway and establish a restaurant, bar, cooking school and short-term rental units there.

Additionally, the village offered an alternative plan for extending the River Walk. It had been publicly discussed that the River Walk would run alongside her restaurant’s deck, which would replace the former Dew Drop’s 70-year-old porches. Concept drawings village officials presented to Shelton after they raised the encroachment issue showed the River Walk hanging over the river, without any deck for Shelton’s business. 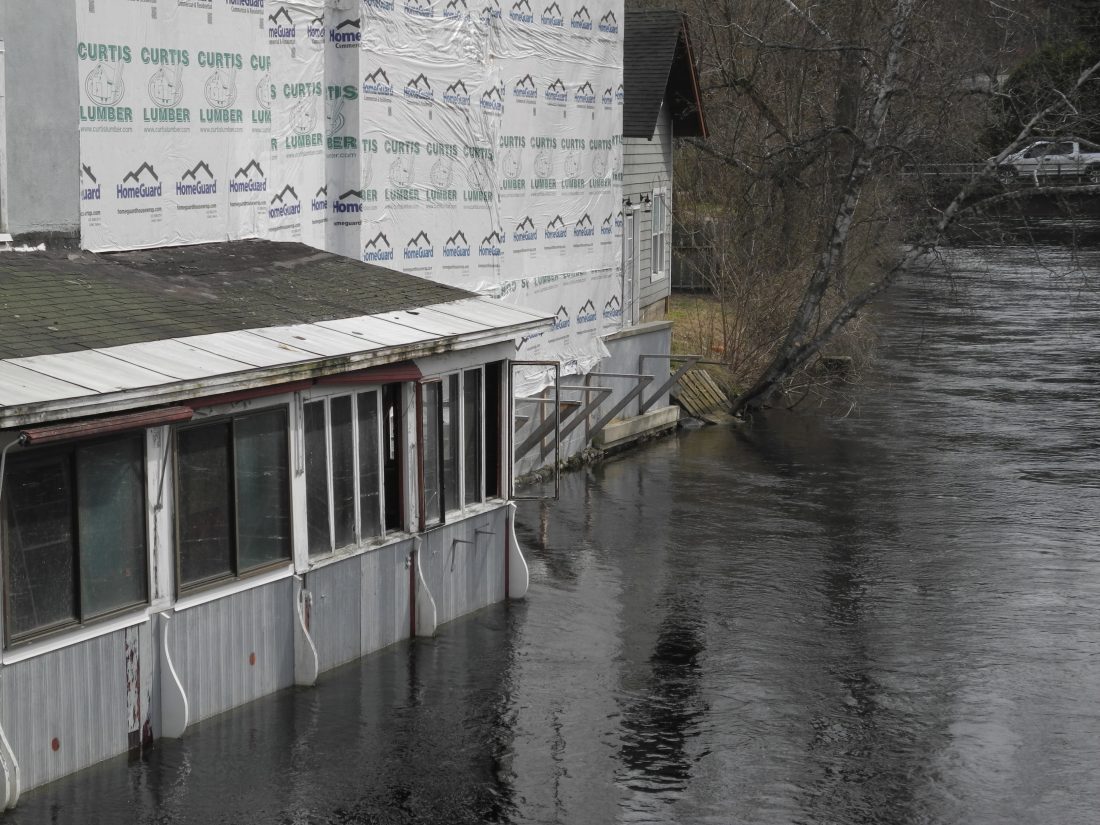 Around the middle of January, Shelton scheduled construction to begin Feb. 4 with her contractor. She had not yet finished applying for a building permit for further work on the structure, which had been halted since the fall of 2017. She told the Enterprise that she was confident that the permit was imminent.

But it was not, according to village code enforcement officials. They were still waiting on updated building plans to begin a formal code review. They received those plans on Jan. 31, a Thursday, with Shelton saying her general contractor was to begin work that Monday.

On Jan. 29, Shelton met with several village officials who raised the question of encroachment to her. It wasn’t the first time they’d brought it up. From emails obtained through the Freedom of Information Law request, it is clear that the village officials had previously raised concerns of permits she might need from the state Department of Environmental Conservation, state Adirondack Park Agency and U.S. Army Corps of Engineers. It is unclear how well it was communicated between parties that this could stop a village building permit from being issued.

“There is no planned in-water work,” Shelton wrote in an email to the village on Jan. 25. “Therefore we do not anticipate needing APA/DEC/Army Corps permitting.” 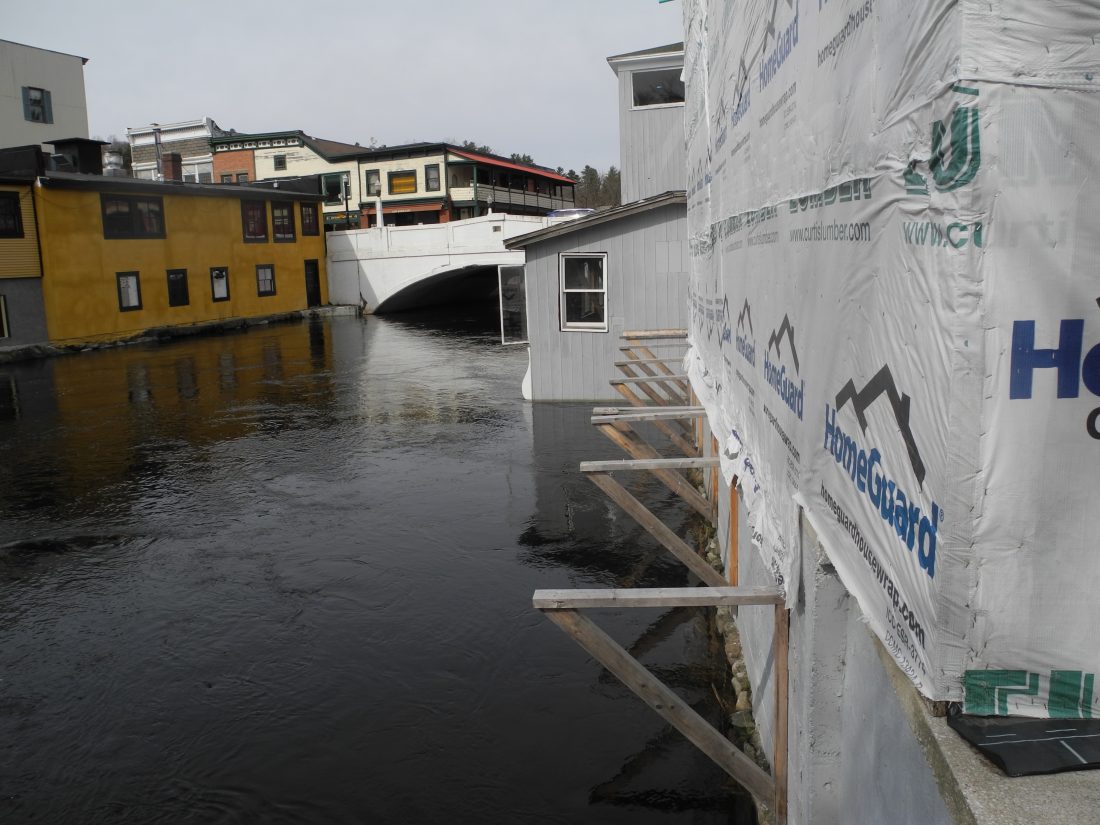 The question stemmed from a survey map she had submitted to the village, in which it appears that the property line for 27 Broadway cut off the overhanging porches on the Saranac River. The river is state owned.

“Once again I’ve been blindsided by stumbling blocks to get this project underway,” Shelton wrote in an email to the village on Jan. 30, “Why did you wait until 6 days before construction starts to bring up these concerns?”

At this meeting, village officials presented Shelton with their alternate concept plan for the village River Walk. In the concept drawings, the new design appears to call for removing the “encroaching” porches, having just the River Walk hang over the river. Shelton responded that the deck’s unique appeal was essential to her business plan.

“The company cannot make enough money to support the debt it’ll be taking on without that space,” Shelton wrote in an email to the village on Jan. 30. “It also materially changes the character of the space and negates the intangible quality of its location.”

Village officials said they would not issue a full building permit until the question of encroachment was resolved; however, issuing partial building permits for work in areas of the building that did not overhang the river was discussed.

“(That) assertion that they had discovered that my property encroached on state land, that put in a series of events that delayed the project for six months,” Shelton said. “For me it came down to a trust issue. … The trust issue comes in is they did this now to delay the project for whatever reason.”

Shelton gave updated plans to the village Code Enforcement Office on Jan. 31 — a Thursday, around 4 p.m. Her contractor’s intended start date was Feb. 4, that Monday — leaving one business day for a formal review of the plans.

That was not enough time, according to Code Enforcement Officer Patrick Giblin. While there is not a set timeline for how long a formal plan review might take, Giblin said it often involves a back-and-forth with the architects and engineers of a project over clarifications and details.

With the plans that were submitted on Jan. 31, Giblin said he’d identified several issues that he needed clarification on. In terms of the state fire code, he said he would’ve asked for more information on a sprinkler system for the residential units planned for the top floor. He said the plumbing and mechanical plans were also incomplete. Because of the amount of machinery and equipment the commercial kitchens would’ve included, he would’ve wanted to see more information included in the plans.

Normally with a project, Giblin said his review comes after fellow Code Enforcement Officer Paul Blaine reviews the building plans — but to try and expedite this project, he worked concurrently with Blaine to review the project.

“I am at a standstill because of the new requirements that have been placed on us to get a renewed building permit. I have lost my general contractor for at least a month because of the delay,” Shelton wrote in an email to village Mayor Clyde Rabideau and other village officials on Feb. 5, requesting a meeting. “If I can’t secure a permit this week and get at least a few things going in there, I’ll need to walk away. I don’t want that to happen. Please help.”

“Mr. Giblin and Mr. Blaine, have spent the vast majority of their time since your Thursday evening submission to review your plans in an expeditious manner, just three business days ago,” Rabideau replied in an email to Shelton later that day. “Applications entailing so many considerations, such as yours, normally take longer … they went above and beyond the call of duty to expedite yours. … these are personal pursuits and mandates borne by you, the applicant, and not those of the village, as we trust your appreciation of this further reality.”

Shelton announced she was walking away from the project on Feb. 7 — that she could not wait the months she estimated that state approvals of the ownership question could take. It did not end up taking that long, but she said DEC officials told her they were unsure how long the approvals might take. She said this is why she lost her contractor.

Shelton filed requests with the APA on and the U.S. Army Corps of Engineers on Feb. 5.

Her contractor, John Leclerc, said he called code enforcement after seeing articles in the Enterprise. He said the whole thing seemed to be a mix-up, and that his departing from the project with Shelton was on mutual terms.

Village officials also followed up with state agencies and received approvals — the porches were not encroaching on state land.

“The DEC provided information at my initial call,” Blaine wrote in an email. “The (state Office of General Services) provided me information the day following my initial call (Feb. 28) and I received the hard copy of the letter approximately three days later.”

So the project might have continued, though Shelton took back the building plans on Feb. 12.

She said it came down to an issue of trust. Up until that point, she said Chicota self-funded the project.

“We have no debt on the project at all,” Shelton said. “The day we start construction, we have to start signing up for loans, and they’re sizable, up to a million dollars in loans.”

She said she wasn’t prepared to take out loans for the rest of the project when the village might spring something like that on Chicota again.

“If they did that, after I had already signed up for those loans, and if they delayed it again,” Shelton said. “That delays me making revenue. That means I can’t service the debt. And bankruptcy becomes a possibility.”

The property at 27 Broadway was listed for sale by its owner, Chicota Inc., for $750,000 on Feb. 12. Mathew Szeliga, broker for the property at Mountain Run Realty, said he has received a few inquires about the project.