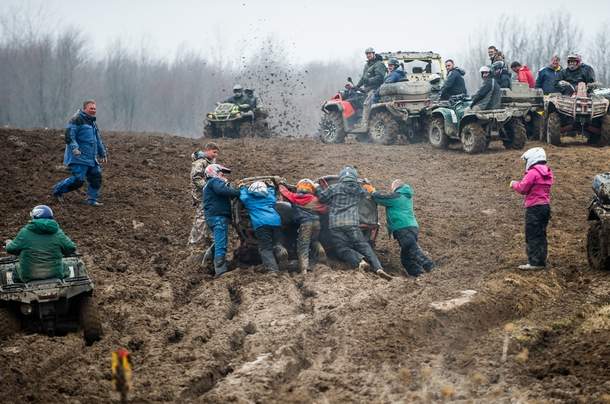 After a boy flipped, his friends and family come running to help flip his all-terrain vehicle back over on Saturday at the 16th annual Polaris Snirt Poker Run at Timberview Inn in Turin. (Provided photo — Daytona Niles, Watertown Daily Times)

BARNES CORNERS — The 16th annual Polaris Snirt Poker Run had another successful year, bringing in business for many counties beyond Lewis with somewhat less controversy than previous years.

According to event sponsor the Barnes Corners Sno-Pals President Scott Mageson, there were 4,800 official participants riding an estimated 3,500 ATVs and UTVs in the 2019 Snirt, bringing in roughly the same amount as last year for the club to use to groom snowmobile trails.

The financial benefit of the Snirt Run goes far beyond the businesses that participated in the event, Margeson said.

Riders coming from all over the state, Pennsylvania, Vermont and Massachusetts told Margeson of long lines at the Syracuse and Utica exits off the state Thruway toll booths with other Snirt-bound vehicles, and ATV-filled lines in Syracuse and Adams gas stations.

County Recreation Forestry and Parks Director Jackie Mahoney said there wasn’t a hotel room available in the county for the weekend. People were being referred to Jefferson, St. Lawrence, Oneida, Oswego and Herkimer counties for months prior to the event.

Many Watertown hotels like the Ramada Inn and Holiday Inn said the Snirt riders ensured they were full all weekend.

“It really helps us out and it’s been that way every year, too,” said Tara Silliman, manager of The Lodge at Headwaters in Boonville. “We were sold out both nights. They’re great people, and they book for the following year when they’re checking out.”

At the Pioneer Cafe, Glenfield, the Snirt marks the change of seasons.

“The impact was pretty big, especially coming out of the quiet season. Snirt usually kicks off the big season for us,” Alicia Stevens said.

For some officials who have worked the event for years, the Snirt and its riders are evolving.

“I’ve seen the transition over the years,” said county Emergency Services Director Robert MacKenzie. “It’s turning more into a family event, and this year I saw a lot of self-policing. People were stopping other people and telling them to stay on the road or not to do something to ruin the run for everybody. I hadn’t seen that in other years.”

Mackenzie confirmed that while there were some accidents, most injuries were relatively minor with a broken arm and leg from two separate incidents being the worst.

There were no arrests surrounding the event and no reports of riders going onto private farmland this year, the sheriff said. Policing with only the 12 deputies available is a challenge, especially to monitor UTVs that are too heavy to be used in the state and finding DWI offenders in the midst of thousands of riders.

“It’s a containment issue. That’s really a decision for taxpayers and the county, if they want more people brought in to handle that many riders,” Carpinelli said.

Roads with surface mud still have feet of frost, which acts as a moisture barrier, making the top muddier and more vulnerable to the heavy traffic.

“Every road that had snow on it wasn’t damaged by the Snirt,” said Young.

Three roads in West Turin — Plumber, North and Higby Roads — and three others in Montague were closed after the Snirt Run. Two of the Montague roads had reopened by Wednesday. Only Pitcher Road remained closed.

Margeson and the Sno-Pals have reached out to municipal leaders and have committed to working together to address the damage after “taking a step back” to let everything dry out.

“We most certainly want ATVs in the county. We are a recreational vehicle county,” Young said, “But we have to schedule the event better, earlier in the month, like when it started.”