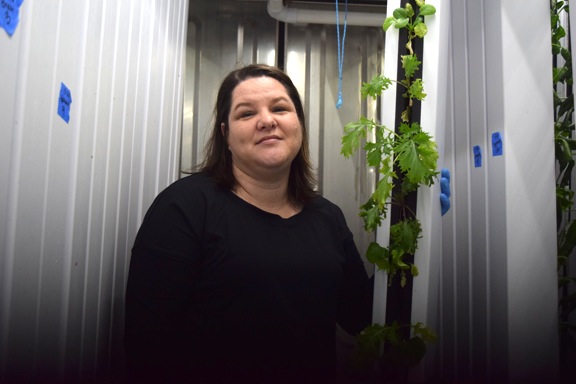 SARANAC LAKE — Inside a 40-foot cargo container at the old village landfill site near McKenzie Pond Road, Aurora White transplants lettuce into columns under the glow of fuchsia grow lights. Hundreds of lettuce transplants grow vertically inside the container, hanging from dozens of columns, gravity fed by tubes full of water and green and orange nutrients.

She calls this place Dandelion Farms, even though she mainly grows lettuce.

Last April, the Saranac Lake village Board of Trustees approved a lease for the container, and on April 8, they approved a one-year lease extension, for $1.

After a year on site, White’s hydroponic cargo container farm is growing and selling about 25 to 30 pounds of lettuce a week. 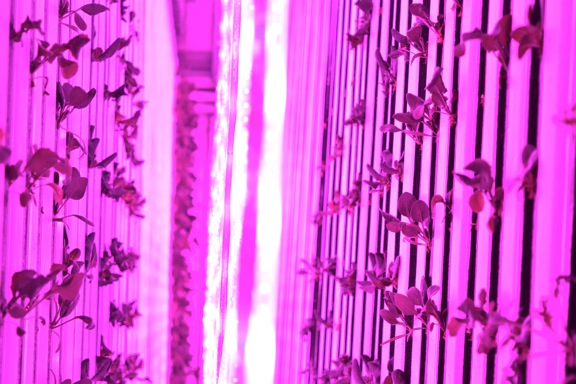 In order to double her yield, all she needs is more regular customers.

White said she and Master Grower Jennie Evans spend about 10 hours a week at the facility, otherwise monitoring and adjusting the inside environment from an app on their phones.

The temperature remains around 68 degrees while the plants are active and about 59 degrees during the plants’ rest period.

The operation uses about five gallons of water per day — as both the air conditioning system and dehumidifier recycle fluid from the air. 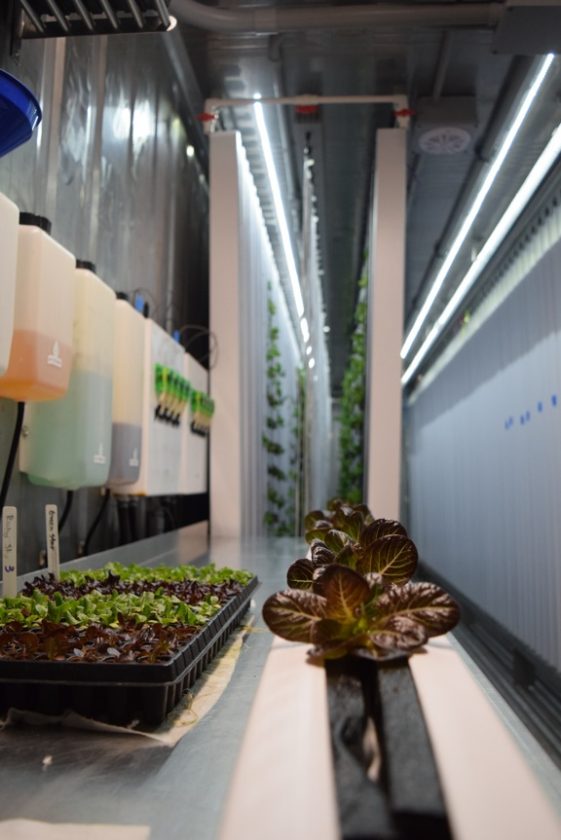 A column of lettuce is ready to receive transplants at Dandelion Farms in Saranac Lake. (Enterprise photo — Jesse Adcock)

Water is the one thing they’ve got to bring into the site. White said they haul in a 300-gallon tank every three months or so. They paid to get the electricity hooked up last April.

White said the operation is about halfway to profitability. With their regular sales, they pay for the trailer itself but not the utilities and the staff.

Currently, she said her two largest and regular customers are the Adirondack Medical Center and Fiddlehead Bistro, both in Saranac Lake.

“It has really allowed us to incorporate more fresh greens year round without going to the commercial lettuces that you traditionally see in the off-growing seasons here,” said Carl Bowen, Adirondack Health’s director of nutritional and environmental services. “It has helped us stabilize our menus with fresh vegetables all year long.”

That’s why White said she started researching the idea. She wanted to find a way to grow fresh greens throughout the year. That led her to the cargo container from Freight Farms. 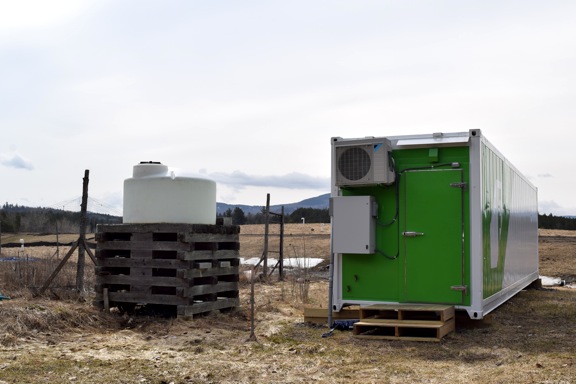 “Right now we grow lettuce and arugula and spinach,” White said. “Once we get those things down, because we’re still in a learning phase, then we’ll probably bring in some herbs and start growing some herbs.”

It all starts in a small plug of peat and adhesive.

“That’s the only growing medium it needs throughout the whole life cycle of the plant,” White said.

Once large enough to be transplanted, White and Evans place the plants into columns, sandwiched between two bars of foam. The plants then grow sideways and are watered and fed from the top the of the column.

Bowen said that because of how the lettuce is grown, it makes it easier to process at AMC.

“When we received their samples and tried them, they were beautiful products,” Bowen said. “There’s not even any dirt to worry about because of how it’s grown. It comes in clean, we rinse it again, and that’s it.”

Additionally, the lettuce columns can be arranged with different blends.

“We can actually customize a person’s blend,” White said. “Fiddlehead Bistro gets what’s called an ovation blend. So we take all the different lettuces, and we mix them all together. And when we harvest we have a custom blend of salad.”

In 2018, Dandelion Farms also sold some of its greens at the Saranac Lake Farmers Market. Learn more at their Facebook page.