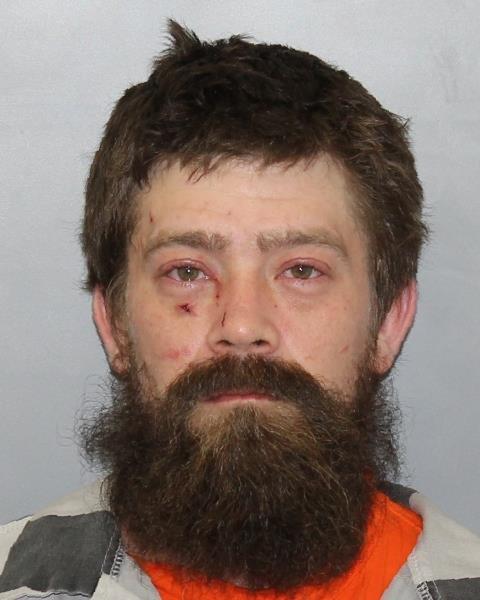 David Bova, 30, of AuSable Forks is seen the day he was arrested in March and charged with second-degree murder for the shooting death of Magen Goyette. (Photo provided — New York State Police)

The first charge is for “intentionally causing the death of Magen Goyette,” a press release from the Clinton County District Attorney’s Office said, and the latter “for attempting to cause” the death of Michelle Goyette, Magen’s mother.

Bova, 30, was arraigned today on all six counts in Clinton County Court before Judge William A. Favreau.

Represented by attorney James E. Tyner, the defendant pleaded not guilty to each count.

The DA’s Office requested that the defendant be held without bail pending further court action.

On the morning of March 13, Bova allegedly shot Magen in the head as she sat in her mother’s pickup truck near Fred’s Auto Repair on Silver Lake Road in the Town of Black Brook.

He had apparently crashed his pickup truck into some trees there, and, according to his statement to police, took his 9mm Hi-Point rifle from the backseat and had started to walk home when Michelle drove her black Silverado pickup truck into view.

Bova admitted in his statement that he fired rounds from the gun but said he wasn’t sure if he’d hit anyone in the vehicle.

Fred Drake, a witness, said Bova approached to within 3 or 4 of the truck, while another witness, Diane Parrow-Drake said Bova “shot right through the window at Magen.”

Bova then left on foot, heading toward his home on nearby Separator Road.

“I kept walking, and the gun was empty of ammunition,” he told police.

Bova caught a ride home with a passer-by.

He said in his statement that, once there, he smoked a cigarette and awaited police.

Bova and Megan had been in a relationship for about six months, he said.

The shooting followed a night of arguments with her, he told police.

More will be added to this report.

Betty Fish said it probably seems fantastic to someone from today’s world — to hear how she grew up during the ...