‘He grew up with me around music’

FRIENDS AND NEIGHBORS: Sometimes, a kid doesn’t mind what his old man listens to

From left, 11-year-old Matthew Gagnier of Union Falls poses with Devon Allman, Berry Oakley Jr. and Duane Betts of the Allman Betts Band Saturday night in the band’s tour bus after a concert at the Strand Center Theatre in Plattsburgh. (Photo provided by Matthew Gagnier) 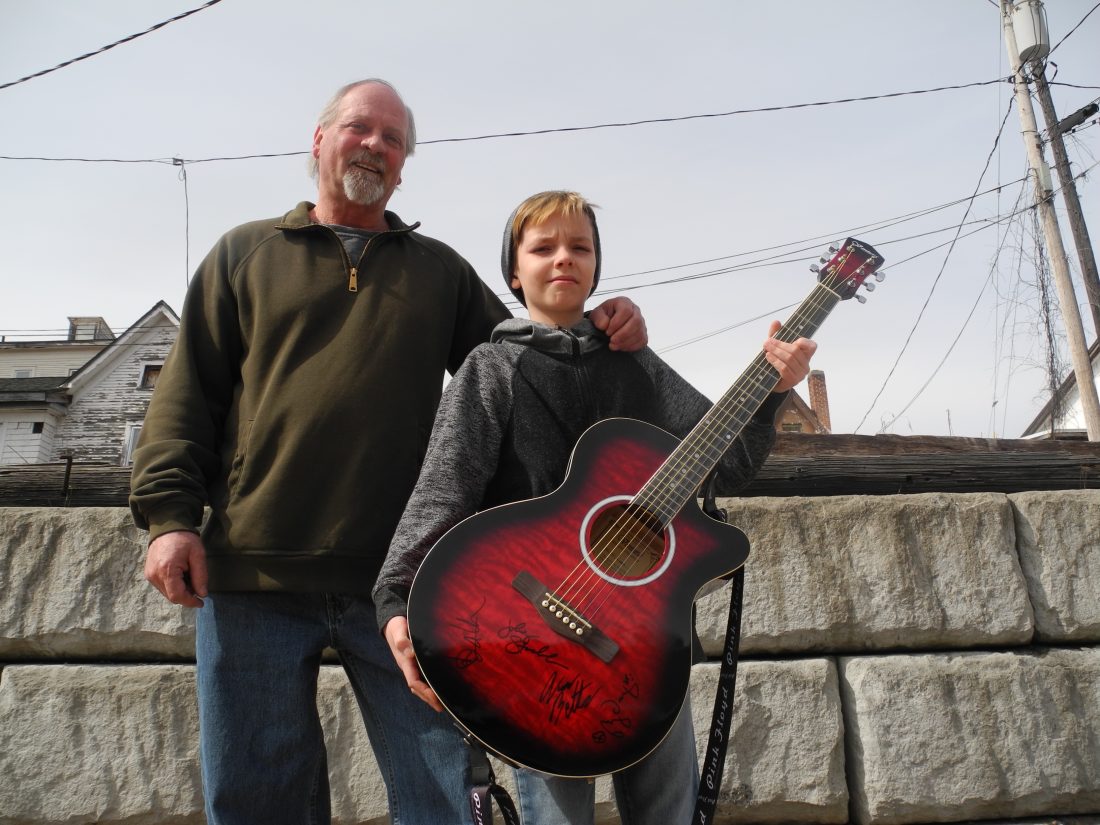 Meeting rock royalty is the latest moment a local father and son have shared in their musical journey together.

Dean Carpenter is 60 years old. When he was growing up, rock music ruled — and it still does in his house and in his truck. He says he has somewhere around 1,000 CDs, he’s been to tons of concerts, and he’s worked backstage security at music festivals in his native Plattsburgh as well as in Vermont and Massachusetts.

Matthew Gagnier is 11. Rock is nowhere near as popular or cool now as it was in Dean’s day, but Matthew still loves it. He’s played around on a small electric guitar since he was 5, but this Christmas his parents gave him an acoustic-electric instrument and got him started taking lessons. Dean said he often hears Matthew play and recently recognized the riff from “Smoke on the Water” echoing through the house — the 1972 Deep Purple hit is a standard for beginner rock guitarists.

Officially, Dean is not Matthew’s father. He’s his step-grandfather. Matthew is the son of Dean’s wife Kim’s daughter. But Matthew has lived with his grandparents since he was 4 months old, just the three of them out in Union Falls.

“I consider him my son because I’ve had him since he was a foot long,” Dean said. And Matthew calls Dean Dad. 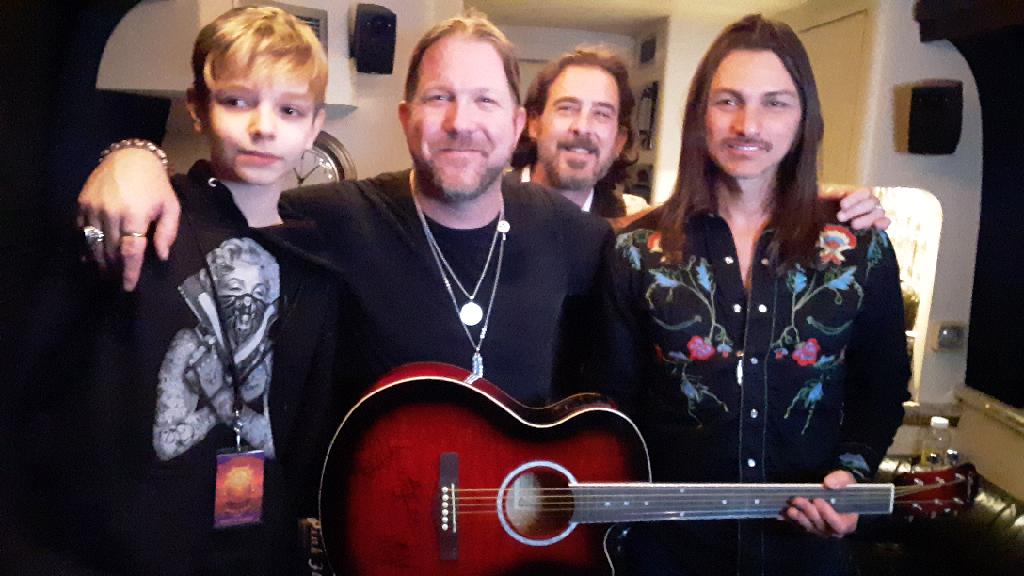 From left, 11-year-old Matthew Gagnier of Union Falls poses with Devon Allman, Berry Oakley Jr. and Duane Betts of the Allman Betts Band Saturday night in the band’s tour bus after a concert at the Strand Center Theatre in Plattsburgh. (Photo provided by Matthew Gagnier)

Dean’s own children are all grown up, and he spends a lot of time with Matthew, between his overnight shifts at Citizen Advocates in Saranac Lake and Matthew’s classes at Bloomingdale Elementary School, where he is in fifth grade.

“He grew up with me around music,” said Dean.

“We used to drive around in my truck when he was 2, 3 years old … and all of sudden his little legs would start kicking to the beat.”

“I even made him a little wooden guitar when he was like 2 years old, (with) a jigsaw. He still has that.

“So I’m hoping that someday he’ll be like Eric Clapton,” Dean said with a laugh. “It’s a high hope, but hey, you never know.”

Matthew’s taste doesn’t always match up with his Dean’s. His favorites are heavy metal bands such as Disturbed, Avenged Sevenfold and Metallica — not new, but newer and more aggressive than Dean’s favorites. But they also agree on a bunch of artists, such as Rusted Root, Tom Petty and — significant to this story — the Allman Brothers Band.

The Allman Brothers were formed 50 years ago this year and became legendary for their unique Southern blend of rock, jazz, blues, soul and country music. They are no longer together, and many of the original members are dead, but several of their children carry on.

He was the only kid there, but he said it didn’t feel awkward. And he thought the band sounded “pretty good.”

“They sounded just like the Allman Brothers,” he said. “That was pretty surprising.” He had thought they would sound more different.

That wasn’t necessarily a bad thing, he said, and it certainly wasn’t for his dad — especially hearing the band play the Allman Brothers classic “Blue Sky.”

“They sound just like going back in time,” Dean said.

In his years of going to concerts, Dean said he managed to get loads of autographs from performers. Therefore, he had encouraged Matthew to bring his Christmas guitar — although they left it in his truck during the show.

While checking out the merchandise vendor, Dean saw a sign advertising a chance to “meet and greet” the band, a package deal that included a T-shirt. He asked Matthew if he’d like that, and Matthew said yes, although he would be nervous to meet them. Dean sprung for it.

“I’ve been to many concerts, but I’d never been on a tour bus myself,” Dean said. “To get my son on the bus with their (Gregg Allman and Dickey Betts’) sons, I was more excited than he was to a certain degree.”

Toward the end of the show, they went out to the truck to get Matthew’s guitar, and he brought it with him onto the tour bus. The band members signed it, took pictures with him and chatted for a little bit.

The thing he remembers them telling him is, “If you get a Les Paul, it’ll take you anywhere.” A Les Paul is a famous electric guitar model, made by the Gibson company.

“That was weird advice,” Matthew said. “What if you can’t play it? … So you just get a Les Paul for, like, five grand, and you can play like Eric Clapton?”

Despite his skepticism, Matthew does want an electric guitar. He and his friends have a heavy metal band all lined up. All they need now is to learn how to play. And for his dad to build a garage.