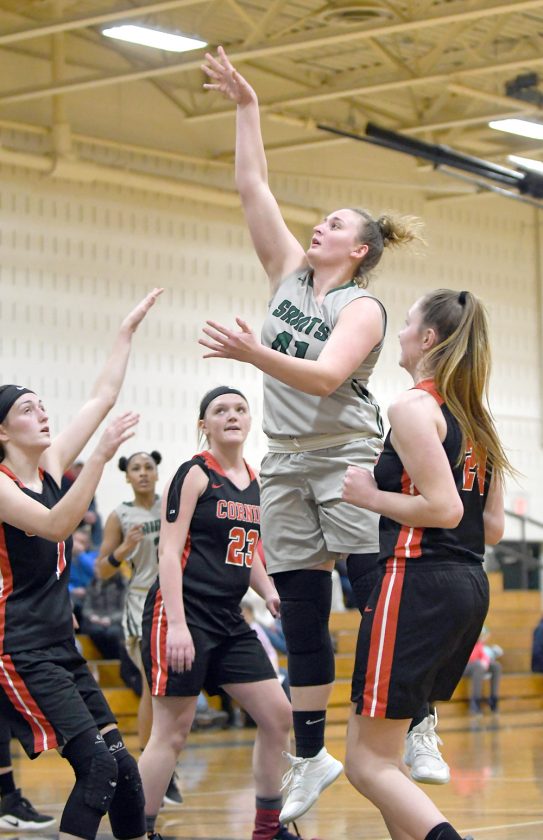 SARANAC LAKE — When Jerrad Dumont brought the North Country Community College women’s basketball program back to life during the 2008-09 season, he envisioned the good-case scenario being a 10-year process for the team to have a shot at playing for a national title.

One decade later, that’s exactly the position the Saints are in.

After defeating Jefferson Community College 74-64 on Sunday to claim their first Region III crown in school history, North Country’s women will be heading to Bethlehem, Pennsylvania to compete in the NJCAA Division III Women’s Basketball Championship.

North Country is one of eight junior college squads in the tournament, which takes place March 14-16 at the Arthur L. Scott Center. The Saints carry a 26-2 record and a 21-game winning streak in the quarterfinal round. They earned the No. 2 seed and will take on the seventh-seed, Passaic County, New Jersey, in a first-round game on Thursday, March 14 starting at 7 p.m.

Dumont has been the team’s only head coach since he revived the program to end a 15-year absence of women’s basketball at North Country. This past weekend marked the fourth time Dumont has taken the Saints to the Region III final four, and they finally got over the hump, not only by winning the region, but just by advancing it to the championship game. 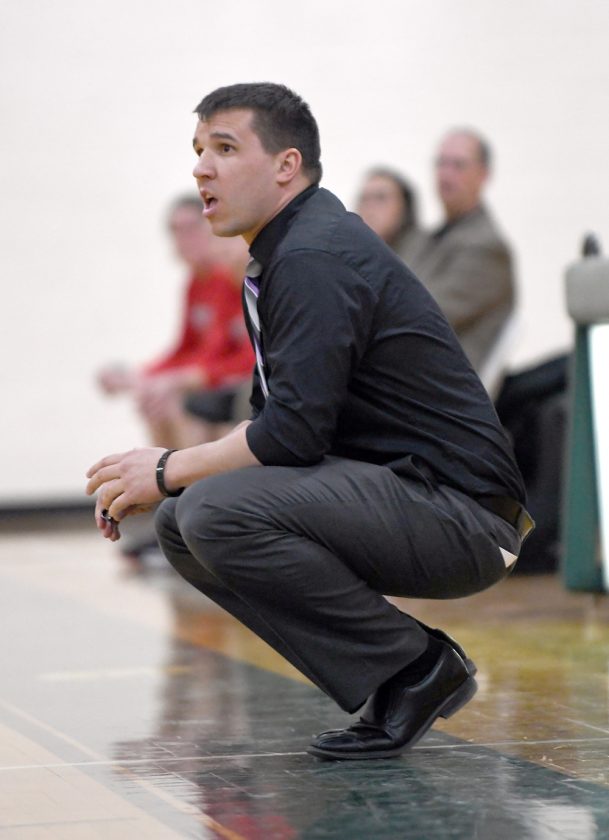 Head coach Jerrad Dumont watches his Saints play at home on Feb. 26 when they claimed a 73-48 win over Corning in the Region III quarterfinal round. (Enterprise photo — Lou Reuter)

At times during his coaching run, Dumont said he has wondered on occasion if the Saints would ever have the chance to contend for a national championship. Dumont said those doubts were finally erased during the closing seconds of Sunday’s Region III final.

“When we started women’s basketball in 2009, I hoped to have an opportunity to play for a national championship within the first 10 years,” Dumont said on Monday after learning of the tournament seedings. “It was our fourth time going to the regional final four, but we never made to the championship game. It’s tough to do. It takes so much work. I didn’t know if we’d ever make it here. I didn’t believe we’d get there until there was about a minute left.”

“The better the seed, the better the chances you have of winning the whole thing,” Dumont said. “And this year, there are a lot of new teams. We’re missing some of the powerhouses that have been there recently.”

However, one team, the only squad seeded higher than North Country, has made its way into the championship as CUNY Hostos of the South Bronx returns to defend its title. If the seedings hold true to form, the Saints and the Caiman could square off for the title on March 16. But of course, all eight teams will need to approach the tournament a game at a time.

North Country enters the national championship ranked eighth in the country in scoring, averaging 78.3 points per game. The Saints are even more impressive defensively, allowing opponents a meager average of 46.3 points per game for a ranking of third among Division III teams. The Saints are also highly ranked in total rebounds, third nationally at 48.6, and fourth in foul shooting, hitting 69.5 percent of their attempts from the stripe.

Three players, returning sophomores Ty Taylor, Jasmine Cruse and freshman Kayla Carder, all own double-figure scoring averages. Carder, a native of the North Country who played high school ball at Northeastern Clinton, leads the team in scoring at 18.9 points per game. Taylor is the Saints point guard from Alexandria, Virginia who is 10th in the nation in total assists with 131. She’s averaged 16.7 points per game, and led the Saints in scoring in the Region III final with 23 points. Cruse enters the national tournament averaging 11 points per game.

Win or lose, all eight teams in the tournament will play three games. Those who triumph in quarterfinal matchups advance into the winners’ bracket while losing squads will head into the consolation rounds.

All four quarterfinal games take place on March 14. In addition to the North Country-Passaic County the quarterfinal round will feature Hostos vs. Anne Arundel (8), Hibbing (4) vs. Western Tech (5), and Owens (3) vs. UConn Avery Point (6).

The semifinal games take place Friday with the championship matchup slated for Saturday at 7 p.m.

With a handful of teams folding their Region III programs this season for various reasons, the Saints had holes to fill in their schedule, and Dumont said that may have been a blessing. The Saints hit the road often, including three trips to Massachusetts, to find games, and they’ll be well away from home again competing in Pennsylvania.

“We had quite a few cancellations, which forced us to find games elsewhere,” Dumont said. “I think traveling was crucial for us. We were playing in different parts of the Northeast, we made a number of trips to Boston, so being five, six hours away, that’s nothing new for us.”