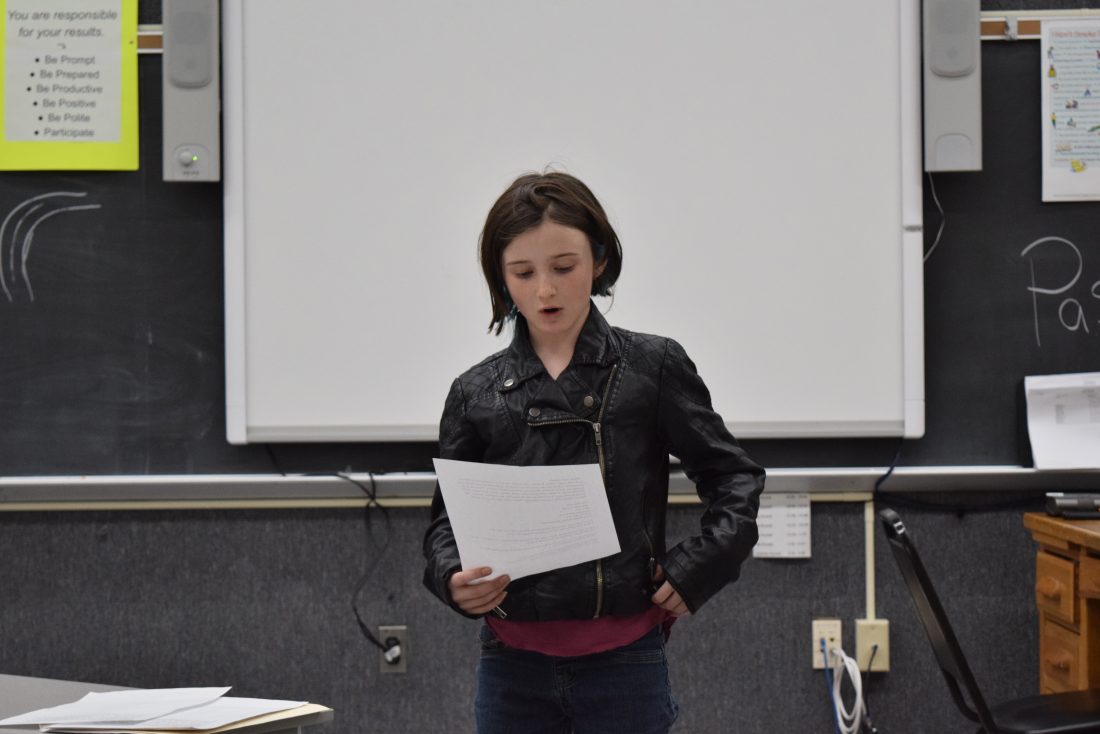 Julia Walkow, a second-grader at Petrova Elementary, dresses as Thalia Grace, the demigod daughter of Zeus from the popular Percy Jackson children’s book series, as she speaks at the Winter Carnival meeting on Tuesday night in favor of a theme she submitted — “Myths and Legends.” (Enterprise photo — Jesse Adcock)

SARANAC LAKE — Themes for next year’s Winter Carnival are down to four: “Myths and Legends,” “Fairy Tales,” “Saranac Lake Rocks” and “Winter Magic.”

The Winter Carnival Committee will choose the final theme when it meets at 6 p.m. April 23 in the Saranac Lake High School large group instruction room. Anyone who attends may participate in the final vote.

At the Winter Carnival Committee meeting Tuesday, more than 70 themes were voted on and discussed, to narrow the options down to those four.

“These are then vetted for appropriate content, copyright and safety, past usage,” Committee Chairman Jeff Branch said.

Typically, any theme directly referencing or parodying media not in the public domain, like “Carnival of Thrones,” or “Grateful Dead,” are thrown out for legal reasons. Themes that also might present safety concerns, like “Fire and Ice,” which might encourage the use of fire on floats during the parade, are also cut. Nothing political, narrow in scope or non-family friendly is considered.

The committee was also given a list of previous themes stretching back to 1966, to make sure possible themes aren’t too similar to what’s been done before.

A second-grader at Petrova Elementary School, Julia Walkow, dressed up as Thalia Grace, the demigod daughter of Zeus from the popular Percy Jackson children’s book series, and spoke at the meeting in favor of a theme she submitted — “Myths and Legends.”

“Myths and legends are family friendly, they’re fun, and you can be creative,” Walkow said. “There are many different kinds of myths and legends, like Greek, Roman, Norse, Norwegian, Native American and more. You could also do monsters like the Loch Ness monster and Bigfoot.”

A full list of the community-generated themes was distributed to the committee members who attended, and they voted for their favorites. “Fairy Tales,” “Saranac Lake Rocks” and “Winter Magic” tied with nine votes each. “Myths and Legends” was the clear favorite, with 19 votes. All four will be considered at next month’s meeting.

Speaking of myths, Branch said at the meeting he’d like to put an end to some — mainly inaccurate complaints about the way Carnival operates.

“Carnival this year, and every year, costs about $90,000 to put on,” Branch said. “So a lot of this information — people think it’s the village, the town, the county. We get a grand total from all of the surrounding municipalities of $3,500.”

The rest is fundraised by members of the Winter Carnival Committee, Branch said. A lot of that is button and poster sales — he said this year the committee raised $23,000 and $7,000 from those respectively. Doonesbury cartoonist Garry Trudeau has been designing buttons for the Winter Carnival since 1981, at no charge.

Despite a few people on social media calling for that to change, Branch said it won’t, because Trudeau is a local — he grew up here, and is good at what he does.

At the Winter Carnival Committee meeting on April 23, new officers will also be elected.