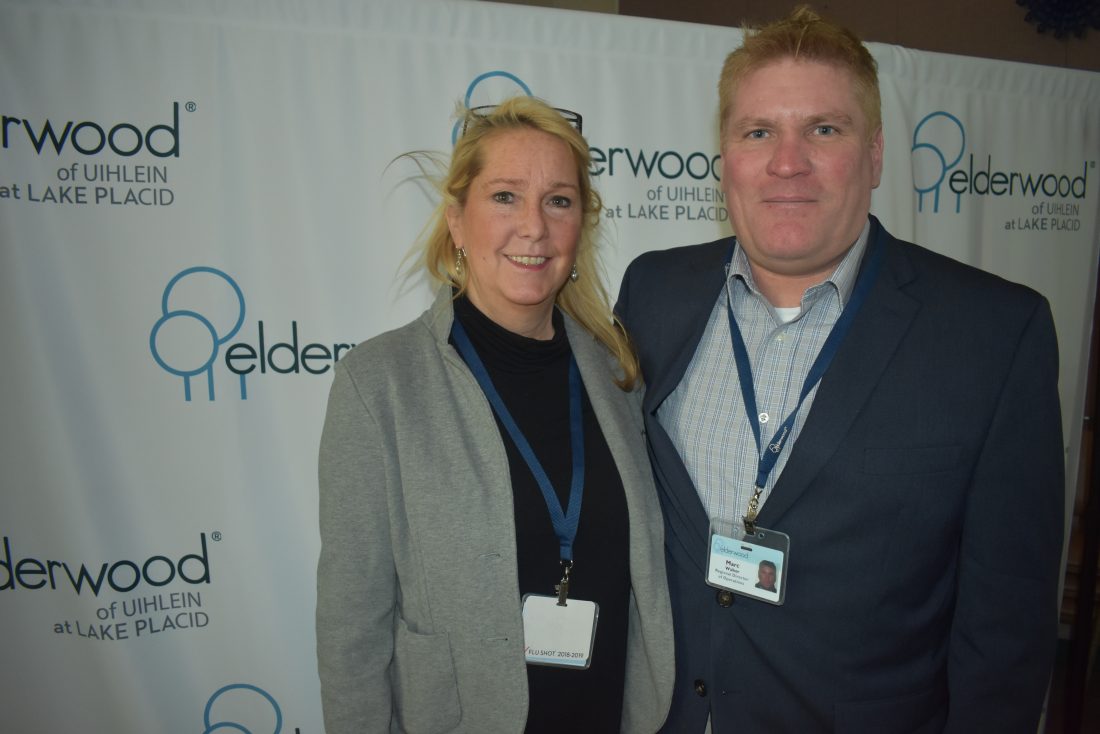 LAKE PLACID — As the first quarter of 2019 nears its end, Elderwood of Uihlein at Lake Placid is planning projects such as a private shuttle bus for its employees with long commutes, increasing pay for nurses, and updating job and customer training programs for new employees, all in the hope of increasing recruitment and retention.

“The North Country is challenged from a staffing, recruitment and retention standpoint for multiple entities, not only health care,” said Mark Walker, Elderwood regional director of operation. “So we here at the facility really took a deep dive into what we can do, thinking outside the box.”

The Lake Placid nursing home has been a staple of this community for nearly 50 years and is part of the growing Elderwood network of medical facilities in the Northeast, which currently runs facilities in North Creek, Ticonderoga and Burlington, Vermont. The Uihlein facility offers independent living, assisted living, physical rehabilitation and long-term care to the elderly.

Elderwood at Lake Placid representatives admitted in April 2018 that it’s difficult to retain staff in the assisted living industry. Caring for the elderly is hard work, the pay for nurses and nursing assistants wasn’t competitive, and in Lake Placid’s case, the workers were coming from places like Plattsburgh, Malone and Potsdam, areas all more than an hour away.

One of Elderwood’s biggest competitors in Lake Placid is the hospitality industry.

“The problem is we’re competing with tourism, resorts and other opportunities that allow staff to get cash basically without having to pay taxes,” Walker said in April, referring to waiters’ and bartenders’ tips.

In an interview Thursday, Walker said, in general, nursing homes across the country have a high turnover for its employees. He said the industry standard is to lose 47 percent of all new nurses within their first 90 days of employment.

Elderwood currently has 134 full-time employees on staff. Walker said the goal is to get that number up to 150 with 83 nurses.

Elderwood used to have turnover rates closer to the industry standard, but in the last six months, Walker said the facility has been able to decrease the turnover for new employees to 18 percent.

Both the current employees’ wages and base pays have increased, Walker said. In 2018, certified nursing assistants made $11.95 and licensed practical nurses made $17 at the time of hire. Now, CNAs earn $14.30 and LPNs make $20.25.

“I strongly believe that an environment is equally as important,” he said.

Only a handful of Elderwood employees live in the village of Lake Placid. The rest come from places such as Saranac Lake, Jay, AuSable Forks, Peru, Plattsburgh and Tupper Lake, according to Walker.

The nursing home is trying to start its own shuttle service that would pick up and drop off workers who don’t have a car in Plattsburgh and Malone, possibly stopping at Dunkin’ for donuts and coffee, which the staff wouldn’t have to pay for. Walker said he’d like to get the shuttle up and running by the start of the summer.

Lake Placid also has a higher cost of living than other areas in Essex and Franklin counties. To help accommodate those traveling long distances, Elderwood rents out rooms at two hotels: the Ledge Rock at Whiteface in Wilmington and the Rodeway Inn in Lake Placid.

“We’ve carved out rooms available to the staff 24 hours a day,” Walker said. “That’s really for staff that’s coming from Potsdam, or the person happens to work a double or the weather is bad. We just booked eight rooms in that snowstorm recently.”

Though still in the planning stages, Walker added that Elderwood is looking into getting dormitory-style housing for some of its employees. Whether it would be on-site or not is still unclear.

Both the transportation and housing initiatives are pilot programs for Elderwood at Lake Placid. If successful, Walker said they can be adapted to other facilities, too.

Another reason turnover in the care industry is high is that often times people take a nursing job without fully understanding the role, Walker said.

“They said, ‘I think this is rewarding. I’ve worked in home care. I’ve worked at assisted living. I’m going to come in and be a CNA.’ And then when we put them through these support aide training, within the first couple of weeks they say, ‘This is not for me.'”

Because of this, Elderwood has revamped its orientation process and will also start conducting a nine-part customer service program, which teaches them how to successfully interact with patients, a patient’s loved ones and co-workers.

Kane said she’s also looking into getting bicycles and reimbursement on gym memberships for employees. The Adirondack Health network’s Lake Placid Health and Medical Fitness Center, which is in the same lot as Elderwood, has a gym and weight room on its premises.

“We want to encourage our employees to get out and move during their breaks and not so much smoking or other unhealthy habits,” Kane said.

“I think the compensation package now is very competitive, but we’re also drawing on more of the community aspect, too,” Walker said. “I’ve seen a dramatic increase in applications not only just for nursing but other departments.”

The other nursing home in the Tri-Lakes area is the Mercy Living Center in Tupper Lake, owned and run by Adirondack Health. Mercy has also faced challenges in the past when it comes to employment, according to Adirondack Health Director of Communications Matt Scollin.

“It can be a tough line of work,” he said. “It takes a special kind of employee to stay in that position long term.”

However, much like Elderwood, Scollin said long-term employment in the last six months has gotten better thanks to the hospital paying for CNA classes to its employees, a newly structured orientation program, and a recruitment and retention committee.

Scollin added that many of Mercy’s nurses live in Tupper Lake, but a few do come from places about an hour away.