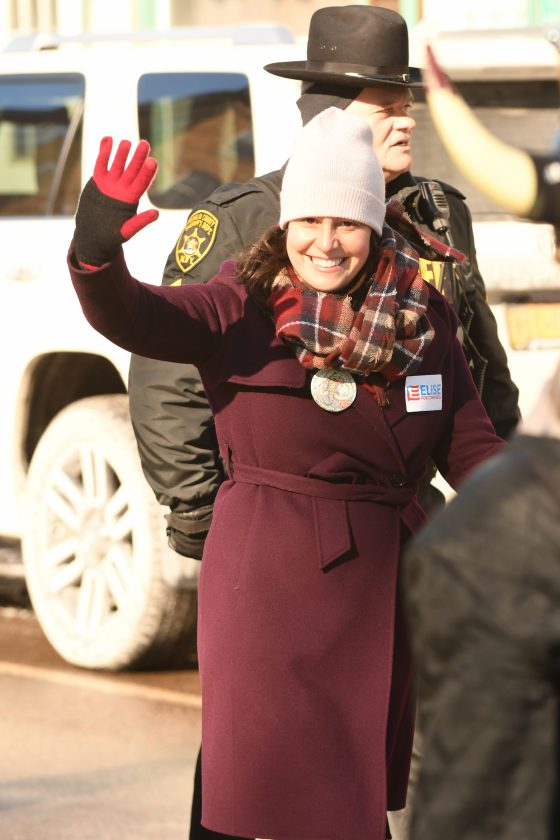 The protesters urged Stefanik, R-Schuylerville, to support a funding bill to keep the government open, without funding for President Donald Trump’s border wall.

This is part of the Indivisible organization’s “Don’t Play Games with People’s Lives” National Day of Action to urge legislators to avoid a repeat of the 35-day shutdown, which caused 800,000 federal workers to miss their paychecks before they were reimbursed when the government reopened.

Gerry and Marie Paetsch of Glens Falls are concerned because one of those workers is their son, who works for the National Park Service and was in the process of transferring to a new location. The shutdown threw a wrench in that process.

“He hasn’t been able to start his job. He’s unemployed,” said Gerry Paetsch, adding that he believes spending more than $5 billion on a border wall is not a good use of taxpayer money.

Queensbury resident Christine Nicols picked up on the “games” theme by taping Uno playing cards to her sign that said: “Government Works for the People. #No Games.” On the other side, it said: “No Dice on Racist Wall,” with two dice taped to the placard.

Stefanik has broken with her party and voted for bills to reopen the government, without funding for the border wall, and has called on House Speaker Nancy Pelosi to negotiate a funding bill that includes border security.

However, protester Joe Seeman of Ballston Spa said it is unfair for President Trump to use extortion to try to get something on his agenda. The Democrats have their own priorities of the Green New Deal and affordable health care.

“They don’t say, ‘If you don’t’ get me my agenda, I’m shutting down the government,'” he said.

Stefanik criticized a Minnesota congresswoman for what she said were anti-Semitic tweets.

Stefanik issued a tweet on Monday calling on Pelosi to remove freshman U.S. Rep. Ilhan Omar from the House Foreign Relations Committee. Omar, a Muslim-American Democrat, has claimed that politicians are getting campaign contributions to be supportive of Israel. In one tweet, she said, “It’s all about the Benjamins baby.”

Stefanik also called on Congress to pass House Resolution 72, which condemns anti-Semitic and anti-Israel hatred from around the world.

Stefanik has co-sponsored a bill that would allow employers to offer tax-free student loan assistance to their employees.

The Employer Participation in Repayment Act would allow employers to offer tax-exempt payments of up to $5,250 per year. The bill has 99 bipartisan sponsors.

“This bill would allow employers to offer their employees tax-free benefits that would help students pay off their loans in a timely manner, so they have the opportunity to save for a home, start a family, or simply live without a looming cloud of debt hanging over their heads,” Stefanik said in a news release.

Stefanik praised an executive order expected to be issued Monday by Trump, which would place a priority on engagement between the artificial intelligence industry and federal government.

“Last Congress, I introduced legislation that created an AI Commission to identify our country’s AI priorities and make actionable recommendations of what direction we need to take in order to fulfill these priorities. I am looking forward to working with the White House to ensure their efforts align with the AI Commission’s efforts and forthcoming recommendations,” Stefanik said in a news release.

A bill co-sponsored by Sen. Betty Little, R-Queensbury, to use gender-neutral language to refer to emergency personnel was recently signed into law by Gov. Andrew Cuomo.

The new state law would replace the word “fireman” or “policeman” with the words “firefighter” or “police officer” in all official documents and laws, according to a news release.

“Antiquated terms reinforce antiquated concepts, which is why this statutory change is so important,” Little said in a news release. “When I was a young woman, the common career choices were teacher, nurse or secretary. I became a teacher and enjoyed it, but I am so gratified that women have so many other options, especially to serve as firefighters and to have the incredible honor of being that person who rushes in despite the danger to save someone’s life.”