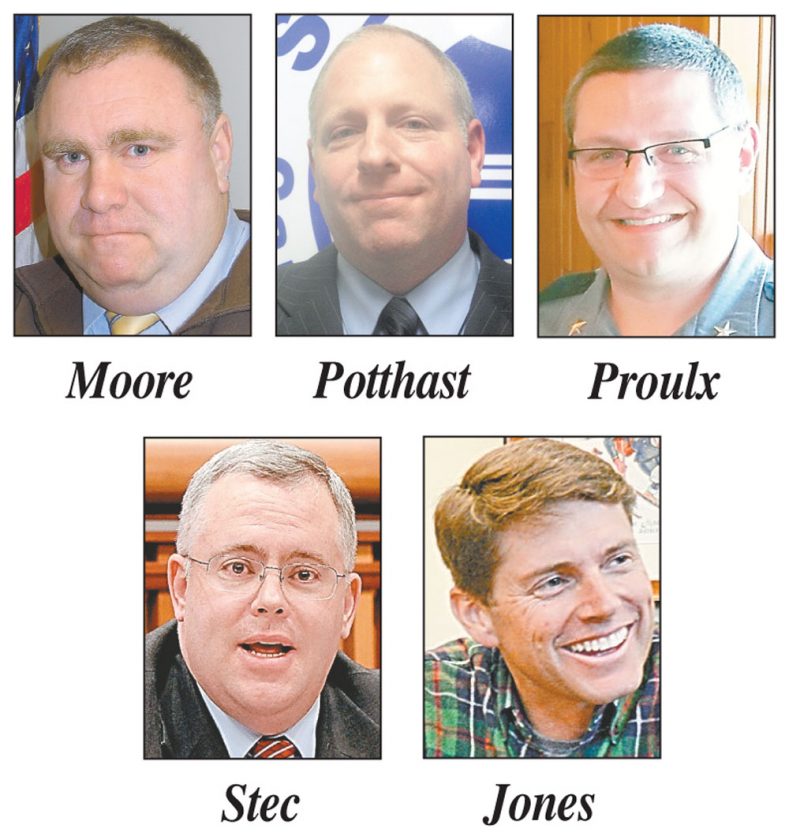 A portion of Gov. Andrew Cuomo’s 2019-20 Executive Budget proposal seeks to ban the release of arrest information and mugshots in an attempt to create a more just justice system, but some North Country politicians, law enforcement and journalists believe the act would bring more problems than solutions.

If passed, this act would eliminate the police blotter published daily on Page A3 of the Enterprise and would remove booking information from public eyes.

“Arrest and booking information have not been found by courts to have the same public right of access as criminal court proceedings or court filings,” according to the act.

The act is part of Cuomo’s Justice Agenda. His budget book said the disclosure of booking information and photos is an “unwarranted invasion of personal privacy.”

“I can understand, to a degree, the point that (Cuomo) is making that, ‘Hey, you’re innocent until proven guilty, so therefore why should we drag your name through the mud before you’ve been convicted?’ But that is not the prevailing argument to me,” said state Assemblyman Dan Stec, R-Queensbury. “The public has a right to know what the police are doing, and among this is, ‘Hey, who have you arrested and why?'”

The act cites the existence of websites that publish mugshots of people who may or may not have been convicted and charging a fee to have the photos removed. The act would amend the Public Officers Law to protect the release of mugshots under the Freedom of Information Law.

“It’s just my personal opinion, but I don’t really think it’s a good idea,” Lake Placid Police Chief Bill Moore said. “Traditionally the courts have ruled that arrestees involuntarily sacrifice their right to privacy when they’re charged with a crime.”

The act also says it is “meant to improve outcomes for formerly incarcerated individuals,” helping them get jobs and reintegrate into society.

All three Tri-Lakes village police chiefs said their departments do not release mugshots unless they feel it is necessary for public knowledge or safety. The act allows for the release of information for a “specific law enforcement purpose, such as disclosure of a photograph to alert victims or witnesses to come forward to aid in a criminal investigation.”

The Saranac Lake and Lake Placid chiefs said they think the problem of blackmail-esque websites could be solved without banning the release of information.

“I think the attorney general’s office should be handling that,” Saranac Lake police Chief Charles Potthast said. “If that’s a problem, let’s address that problem directly.”

Moore said there are around 15 states that have laws restricting mugshot “extortion” websites. In 2017, New Jersey Gov. Chris Christie signed a bill allowing such sites to be sued.

Assemblyman Billy Jones also said he does not support the act because he feels it is not specific enough and expressed what he said is the public’s concern that people in power will misuse the law change.

“Where do you draw the line? What crimes are subject to this and what are not?” Jones said. “Whenever you have people in power proposing these laws there’s always going to be that concern that they’re trying to hide something or that people in powerful positions or politically connected people will try to have their records remain secret. In the interest of transparency, we don’t want that.”

Jones said he would prefer a ban on the mugshot websites that demand money.

Stec said, “This has long been public information. The public expects it. The public deserves it. And to try to claw that back from the public now I think is going a bit far for the governor. Because the flip side is now people could be arrested and no one would ever know.”

The state Senate and Assembly will produce their own budgets, and the final state budget has a deadline of April 1.

The Post-Star of Glens Falls wrote an editorial condemning the proposed act, including the way it was introduced, saying it, “could be the worst idea (Cuomo) has ever had, proposed in the worst possible way.”

“Important changes in state law — and this change would require amending the state’s Freedom of Information Law — should not be included in the budget,” the editorial reads. “They should be put forward as bills, to be brought up for debate and consideration on their own merits by our representatives in the Legislature.”

“My two concerns with the law are transparency and public safety,” Potthast said. “I feel it’s important that the public is aware of when we’re arresting people because we don’t want to get to a point where we’re making quote-unquote ‘secret arrests.'”

Potthast said he does not see a problem with the current way things are run.

Not all police chiefs felt as strongly about the act, though.

“I’m neutral on it,” Tupper Lake police Chief Eric Proulx said. “It doesn’t affect me one way or the other if we release arrest information or not.”

Under the current system, Proulx said arrest records are frequently expunged after people take plea deals or adjournment in contemplation of dismissal deals. But after the information is released, it is hard to take back.

Proulx said recently the village of Tupper Lake was looking to hire an employee and asked the police department to run a background check on the individual it was considering, as is often done. He said police were not able to find anything in their records, which are sealed, but found arrest information on the Enterprise and Press-Republican websites.

He said to completely remove that information, people would have to call every newspaper that published the arrest, and even then, private citizens may have photographed or screen-captured the report.

The Press-Republican of Plattsburgh wrote an editorial on the act, clarifying what an arrest reported in the newspaper means.

“An arrest is not an indication of guilt,” the editorial reads. “But it is enough of a caution that, until the courts have done their job, members of the public should have the information to guide their own behavior.”

Proulx said he thinks the worry of secret arrests is “ridiculous,” at least for his department. He said he knows there is corruption and misuse of power out there, but he promised to hold his officers accountable for every arrest they make.

Kristin Lowman, the chief of agency publications for the New York State Police, said the agency does not comment on pending legislation.

“If a case is disposed of, we will delete a press release and a mugshot from our system,” Lowman said.