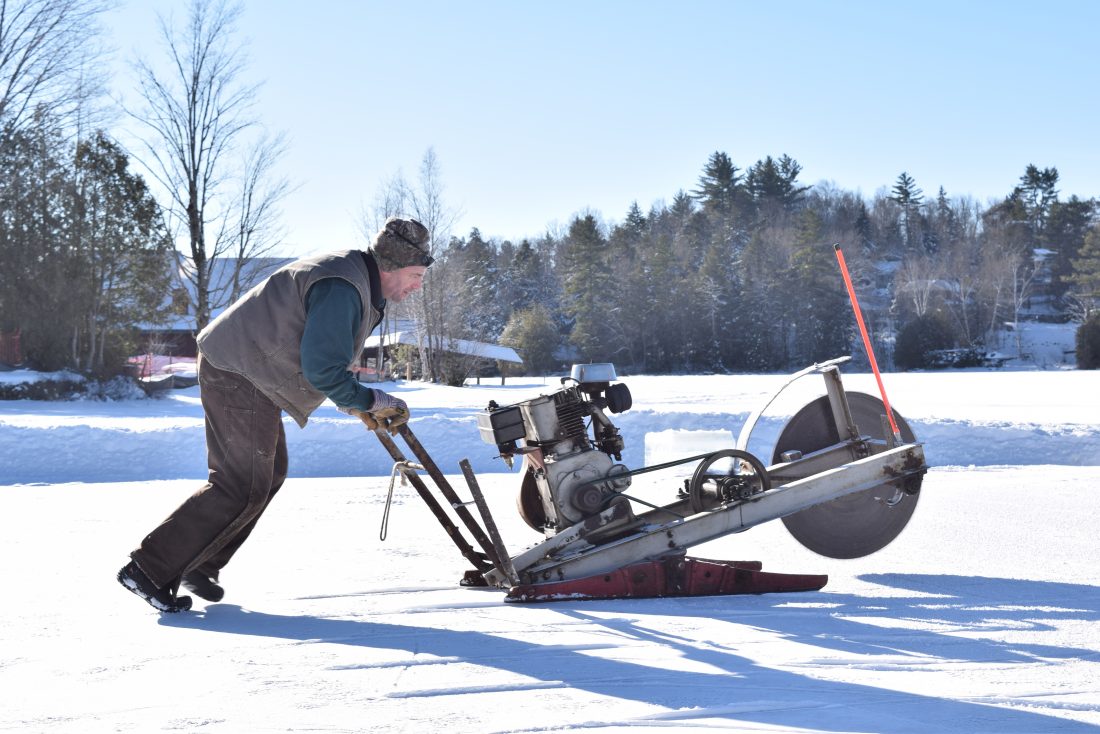 Garrett Foster using the 80-year-old Duso saw to cut in the grid lines for ice blocks on the first day of Ice Palace construction on Jan.17, 2019. (Enterprise photo — Jesse Adcock)

SARANAC LAKE — The same 80-year-old saw and same two operators have been used to cut the blocks for the Winter Carnival Ice Palace since 1955.

“The saw was originally built in 1939 by Harry Duso, my grandfather,” Kim Duso said. “We’d harvest it out of the lake, then pack it in the ice house and then sold ice in the summertime.”

This was on the premises of the Crescent Bay Marina, established by Harry Duso in 1924 on Lower Saranac Lake. The saw itself is of homemade construction, with a Wisconsin-style single-cylinder engine.

“It’s, I believe, either nine or 10 horse power,” Kim said. “It’s tried to been copied by several different people around and they just can’t seem to make one that cuts the way that one does.”

“It’s just the balance of it,” Kim said. “The torque of the engine, the placement of the weight in the saw … it looks easy to use, but it’s a difficult chore because you pull the saw, you don’t push it. You pull it towards you, and the saw blade wants to push the saw towards you also.”

Kim said he didn’t know if there were previous iterations of the saw — if his grandfather had built others before 1939 before sticking with this one.

“In 1955, the village dropped their saw that they were using through the ice,” Kim said. “They couldn’t get it running right away, so they asked my father or my grandfather, I don’t know which one of them, if my father could come down there and cut ice for them.”

“When I was trained on it, Mr. Duso came down and basically showed me,” Foster said. “Stayed with me for the whole first year to make sure he was comfortable with me using it, adjusting the depth, you know, as the ice gets thicker.”

The saw can cut to a maximum depth of 11 and three-quarter inches. When cutting, the operator always has to leave a couple inches to work on, to push the saw over to cut the next row of ice blocks.

“You can’t cut all the way through, ever,” Foster said. “At the very deepest, if we have an 18- or 19-inch block, we’re only cutting about 11 and three-quarter to 12 inches, and the rest has always been cut by hand.”

Foster said he cuts the grid in the morning, before most of the other volunteers get on-site at the Ice Palace. He starts the saw in the village garage, lubes up the saw’s chain, and puts gear oil in the wicks for the pillow block bearings, then tows it down to the work site on Pontiac Bay.

“My opinion is every engine likes a warm garage,” Foster said.

The first day of work takes a little longer, because the grid needs to be marked by a chalk line. But, every other day, “you make your first cut,” Foster said. “And then you use the runner to make your lines for your next cut … the runner makes your line in the snow — that’s what you go by.”

Other volunteers then come behind with handsaws and spud bars to separate the blocks and float them down the channel for pick up and use in the construction of the Ice Palace.

“The big question everybody always asks is when or how often do you sharpen the blade,” Foster said. “I’ve only see it sharpened one time since I’ve used it, and it was too sharp. You just want the cut slow and steady and when it was too sharp it kept pushing me too fast and it kept stalling the saw.”

Beyond touching up burred saw teeth with a flat file, Foster said he doesn’t seen why you’d ever want to sharpen the saw. He cuts between 200 and 300 blocks per day, and usually 3,500 to 4,000 per year.

In the springtime, Foster said he drains all the gas out of the machine before storing it, and changes the oil yearly.

(Correction: Garrett Foster’s name was misspelled in an earlier version of article.)