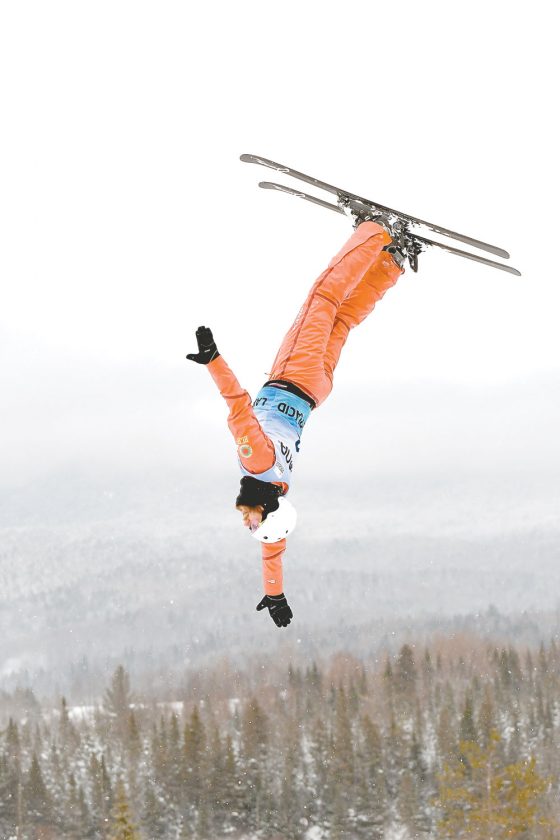 Anton Kushnir, the 2014 Sochi Olympic gold medalist from Belarus, takes flight during Wednesday’s aerials training session at the Olympic Ski Jumping Complex in Lake Placid. Kushnir and the rest of the planet’s top aerials and moguls skiers are in town for the freestyle World Cup competition, which takes place today and Friday at Whiteface Mountain and concludes Saturday at the ski jumps. (Enterprise photo — Lou Reuter)

They also said the cost of upgrading Olympic facilities, some which are more than half a century old, can be difficult to determine before renovations begin.

In the budget Gov. Andrew Cuomo proposed Tuesday, the state would invest $82.5 million this fiscal year in ORDA, which maintains and operates state-owned winter sports venues.

In 2017, the governor proposed $20 million for ORDA venue upgrades, and the state Legislature approved it.

In 2018, the governor proposed $62.5 million more for ORDA venue upgrades, and the state Legislature approved that, too.

ORDA CEO Mike Pratt couldn’t put a price tag on these upgrades, but he said even if Legislature approves the $82.5 million, it still wouldn’t be enough to fund all the projects ORDA would like to complete.

“But this is an incredible opportunity,” he said, “and it’s nice that the governor recognizes our needs. The projects are going to be on going for a number of years.

“We have 10 facilities that have a tremendous amount of infrastructure.”

Many of the venue upgrades are to meet requirements for the 2023 Winter World University Games, an international multi-sport competition expected to draw 2,500 athletes to compete in events such as hockey, biathlon, snowboarding and more. However, Pratt said the renovations will secure Lake Placid as multi-sport host city for decades to come.

“You look at a lot of the current Olympic facilities that were built in the late ’70s, and they lasted close to 40 years,” he said.

ORDA board member Art Lussi said the price for a renovation or upgrade to an old facility can change after a project starts. Even with plenty of planning there are some unforeseen expenditures, he said.

“What is expected to be a $50,000 fix turns into a couple of hundred thousand because a wall is unstable or an elevator needs to meet modern (American with Disabilities Act) requirements,” Lussi said.

Two of the biggest projects for ORDA right now are at the Olympic Jumping Complex and the Olympic Sports Complex and Cross Country and Biathlon Center at Mount Van Hoevenberg. ORDA wants to upgrade the ski jumps to meet international competitive standards and also add a zip-line attraction and snow tubing hill. At Van Hoevenberg, ORDA is expected to build a new biathlon stadium, an alpine coaster for public recreation, a second coaster for transport, more cross-country ski trails, a welcome center, an 8 million gallon snowmaking reservoir and storage structure, and hiking trailheads that would connect Mount Van Hoevenberg to Cascade, Porter, Marcy and Pitchoff mountains. Most of these aspects would also get updated lighting systems.

“When we want to put in frost rails on the inruns at the ski jumps, at first glance it might look like only half a million, but then some of the decking for the jumps needs to be replaced,” Lussi said. “I think we’re doing all we can to prepare for the 2023 University Games, and we’re encountering that the forecast may not be as accurate as we might like.”

Lussi said he was thrilled with the proposed investment and that upgrades will help Lake Placid continue hosting multi-sport events like the International Children’s Winter Games, which ended last week and used all of the Olympic venues in Lake Placid except Van Hoevenberg.

“I think Lake Placid did a phenomenal job with the Children’s Games,” he said. “The goal for ORDA is proving to the world that we’re still capable of doing stuff like that. We not only hosted the sports, but we housed, fed and transported the athletes. It was impressive.”

State Sen. Betty Little, R-Queensbury, who has been closely involved with Lake Placid’s Olympic venue upgrades, said she was happy with the proposal because it ensures Lake Placid’s ability to host large events like the World University Games and beyond.

“Its more than just those games,” she said. “It’s the future. We want to attract international events because it’s part of our economy. There are some plans to expand the Olympic Training Center, and with the new (Adirondack Health Lake Placid Health and Medical Fitness Center), that will make sure to attract athletes. There are facilities in Canada and out west that are our competitors. We’ve been fortunate enough since 1980 and the start of ORDA to continue to invest in our venues.”

Eighty million is a large number, but like Lussi, Little said it can be difficult to see how far a dollar will stretch.

“Everything is expensive,” she said. “Two years ago I was able to get $3 million for the ski jumps, thinking it would be enough, but obviously it wasn’t.”