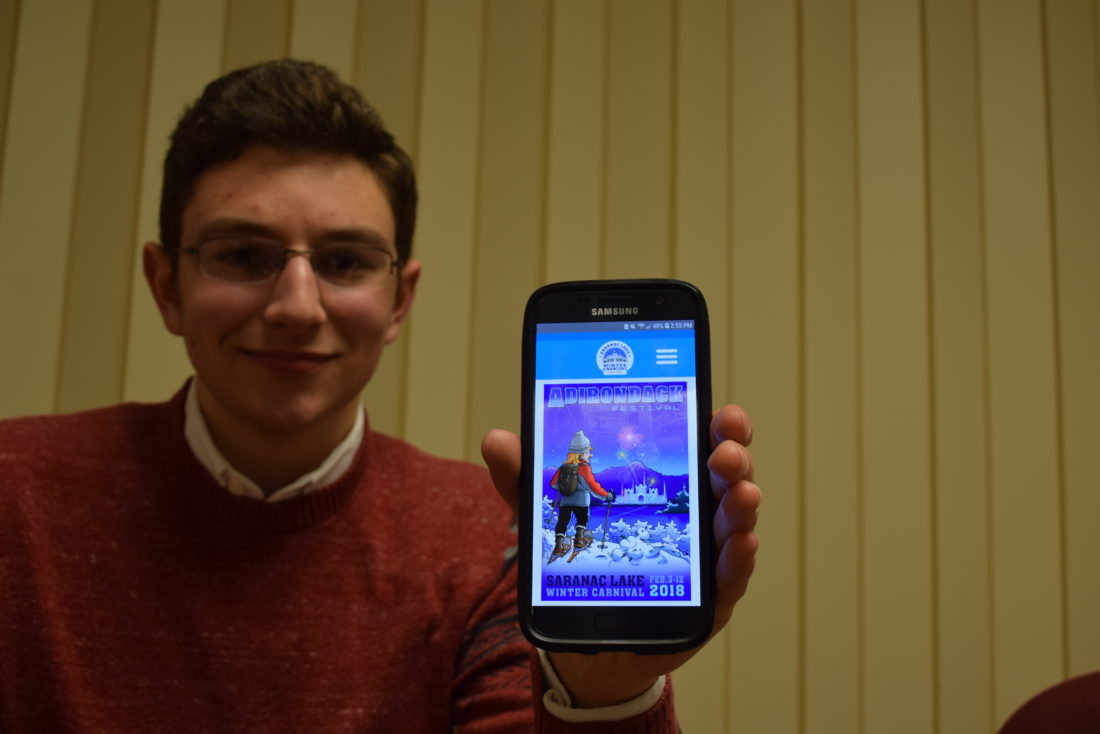 SARANAC LAKE — Out of his appreciation for the Saranac Lake Winter Carnival, a local teenage app developer created a Google Android app for the Winter Carnival. Now he needs someone to help him create the Apple iOS equivalent.

“The good thing, if someone wanted to assist us,” said Bruno Freeman, the app’s developer, “(is that) the idea and design is already done.”

Freeman first pitched the idea to the Winter Carnival Committee in September 2017.

“This was his idea, and he’s been great on taking it all on himself,” said Colleen O’Neill, the Winter Carnival Committee’s PR representative. “We’re always looking for volunteers and people like Bruno, who stepped up out of nowhere.”

Freeman, a 17-year-old senior at Saranac Lake High School, as been coding for three years, beginning with a Johns Hopkins Center for Talented Youth summer program in 2015. He’s since taught himself with online resources and communities such as Stack Overflow, Udemy and Khan Academy. Freeman attended a hackathon at the University of Massachusetts last year that he said was beneficial.

“I liked to play on my computer when I was really little, and I started learning that I could control it,” Freeman said, “manipulate it and stuff in that way. I really took to it.”

Apple’s development suite, Xcode, can only be easily accessed on an Apple Mac operating system.

“Additionally, the coding platform used is Apple’s proprietary programming language called Swift,” Freeman said. “I have found ways to start the process, but it’s very, very difficult, and it can’t compare to having Mac in front of you.”

Though Swift is structurally similar to Java, Freeman said learning a new programming language on a program he can’t easily access on his own computer “just doesn’t seem feasible for me.” Also, he’s on the Winter Carnival Court and has his schedule full with academics and sports. So he’s reaching out, hoping someone skilled comes along to help.

“We can’t officially say that we endorse it yet; we think it’s a great idea,” O’Neill said. “There’s still some testing to be done.”

Both Bruno and O’Neill said it is unlikely the app will launch to the wider public for this year’s Winter Carnival. Instead, it will likely be tested by a group of 50 to 100 people “that will understand it’s just kind of in a beta.”

The app, titled “Appy Carnival” using the Winter Carnival’s logo, opens to a portrait of last year’s promotional material. A sidebar gives the user a list of options. First is the schedule tab. This links directly to the Winter Carnival’s mobile website, where a running list of events displays.

“Because the Winter Carnival already has a mobile website,” Freeman said, “a lot of this was trying to add new features that they can use and try not to be redundant.”

Next is a notifications page, which allows an app user to receive messages from the Winter Carnival Committee about upcoming events and important news. The app also offers a mapping function, tied into Google Maps, that displays locations of note in town like Harrietstown Town Hall and the Ice Palace.

After taking pictures with their phones, a postcard generator allows users to stamp the images with messages such as “Happy Carnival!” and “Greetings from Saranac Lake!” Font, color and the message can be altered.

“Then it’ll save to your photo gallery,” Freeman said, “and then you could text that to someone or post it on Facebook.”

A themes option allows users to look at promotional material and artwork from past Winter Carnivals. Currently it only extends back to 2015, but Freeman said he has plans to include more.

“We thought that would be a cool way to show the history and get continued appreciation for the work that Garry Trudeau does for the Carnival,” Freeman said.

After linking directly to the Winter Carnival’s website, the last in-app feature is a survey. Freeman said he envisioned this being used to let parade attendees vote on their favorite float.

“Then it totals the votes, and whoever gets the most votes at the end, the Winter Carnival can do with that information what they may,” Freeman said. Additionally, he’d ensure there can only be one vote per user, even if someone tries uninstalling and reinstalling the app.

Though it’s a significant time commitment, Freeman said he hopes there’s someone out there who wants to contribute to the Winter Carnival as much as he does.

“I’ve enjoyed the process of giving back, and it’s made me happy to see how excited the committee has been about this,” Freeman said. “The impact I see it having is a great reward.”

If you or someone you know feels the same and are familiar with iOS app development, email jadcock@adirondackdailyenterprise.com.