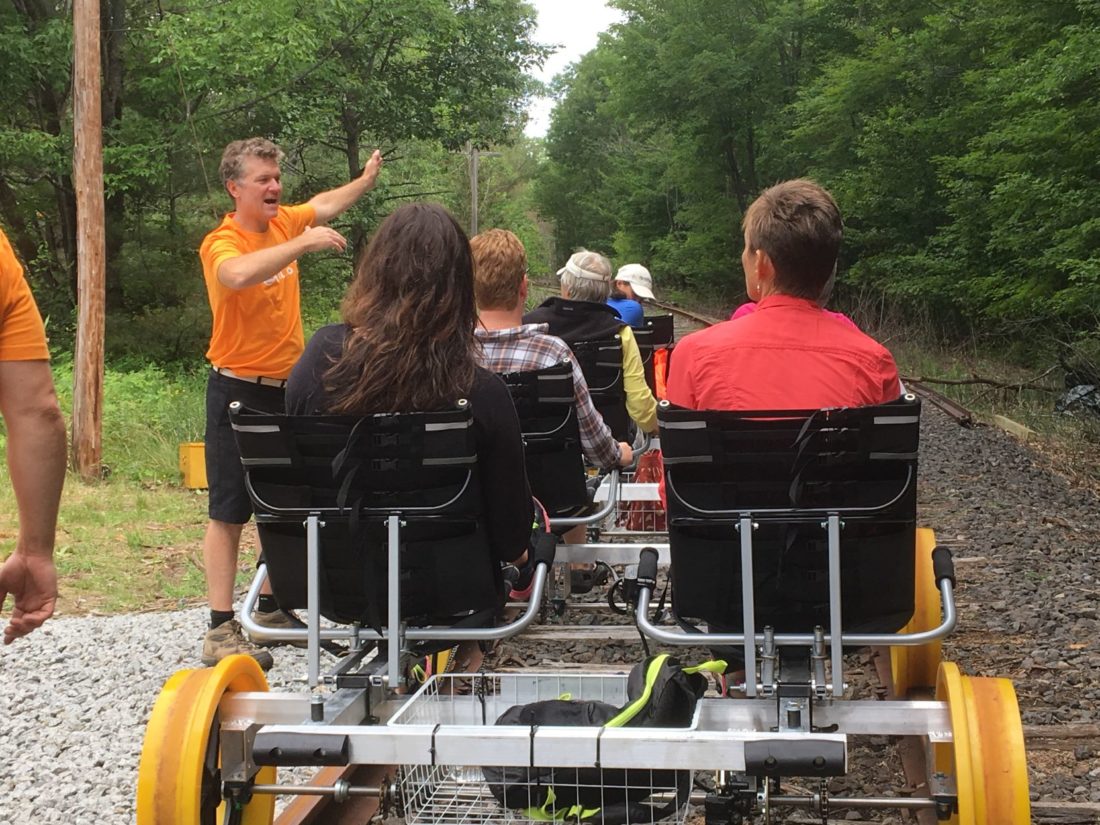 Revolution Rail Co., the rail bike company that was ousted from a rail line north of North Creek, has filed a lawsuit against the owner of the line, claiming that the rail owner illegally terminated its contract with the rail bike provider.

The litigation, filed last week in state Supreme Court in Essex County, seeks to have the company’s contract reinstated to allow rail bike operations in the spring.

Revolution Rail Co. has operated on tracks north of North River for the last two summer seasons, offering rides on pedal-powered rail bikes over the Hudson River and into the state Forest Preserve. The tracks are owned by Iowa Pacific Holdings, which operated Saratoga & North Creek Railway on the local rail line for 6 years before closing last spring amid financial problems.

Iowa Pacific is in the process of selling the line that runs from North Creek to the hamlet of Tahawus in Newcomb to OmniTRAX of Colorado. On Nov. 13, legal counsel for SNCR sent a letter to Revolution Rail canceling its contract for 2019, claiming that Revolution Rail’s insurance policy was inadequate.

Revolution Rail’s counsel, John Wright, wrote in court papers that the company has had proper insurance coverage in place throughout its operations, and that SNCR had not previously raised the issue or given the company the chance to rectify any alleged issues it noted. A copy of a $2 million insurance policy was filed with the lawsuit.

The lawsuit seeks to have a declaration that Revolution Rail complied with its end of the contract and “is the holder of a valid and subsisting license” to use the rail line, which is known as the Tahawus Line or Sanford Lake Branch.

There have been talks of the company relocating to a stretch of tracks in Hadley and Lake Luzerne owned by Warren County for next year, but Revolution Rail co-founder Michael Dupee said Friday that the company hopes to be back operating from its headquarters at the rail depot in North Creek.

“We are planning to be back in North Creek in 2019, bringing thousands of people from all over the world to experience the beauty of the Adirondacks firsthand, just like the last two years,” Dupee said. SNCR’s owner, Ed Ellis, and counsel David Michaud did not respond to requests for comment this week. Michaud, though, wrote in a Dec. 12 letter filed in court that the insurance policy was not adequate, and that courts cannot impose an order that would interfere with a rail carrier’s service. No court date had been set as of Monday.