Long Lake residents, more than 40 of them, discuss the town’s recent rash of power outages at a town board meeting Thursday evening. (Enterprise photo — Aaron Cerbone) 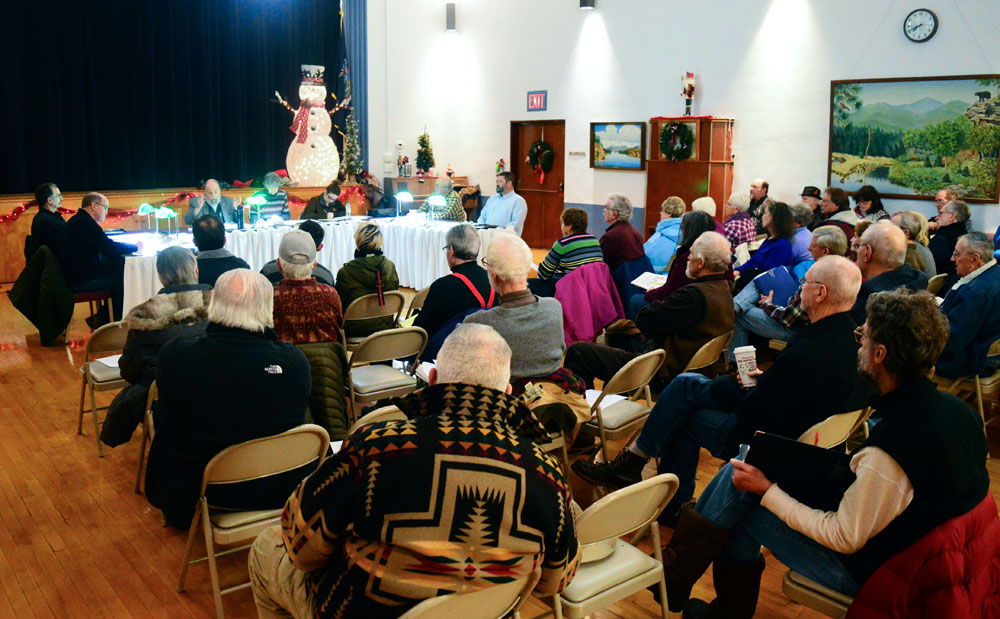 Long Lake residents, more than 40 of them, discuss the town’s recent rash of power outages at a town board meeting Thursday evening. (Enterprise photo — Aaron Cerbone)

LONG LAKE — More than 40 members of this community turned out to a town board meeting Thursday to hear what the local government is doing in response to a streak of power outages that left the town dark and cold on some of the coldest nights of the winter so far.

They also shared their own plans to spark action by state leaders and vented their frustrations with Long Lake’s power supplier; New York State Electric and Gas.

Town Supervisor Clark Seaman said two NYSEG crews have been stationed in Long Lake this past week in anticipation of bad weather: one to “babysit” the Newcomb substation generator and the other to work on lines.

“Give credit where credit is due. I think NYSEG is at least being more responsive,” Seaman said. “But I’m not going to count on them doing that every time there’s a storm predicted to come.”

He clarified that he was thankful for the crews and local workers, and said that they deserve credit. 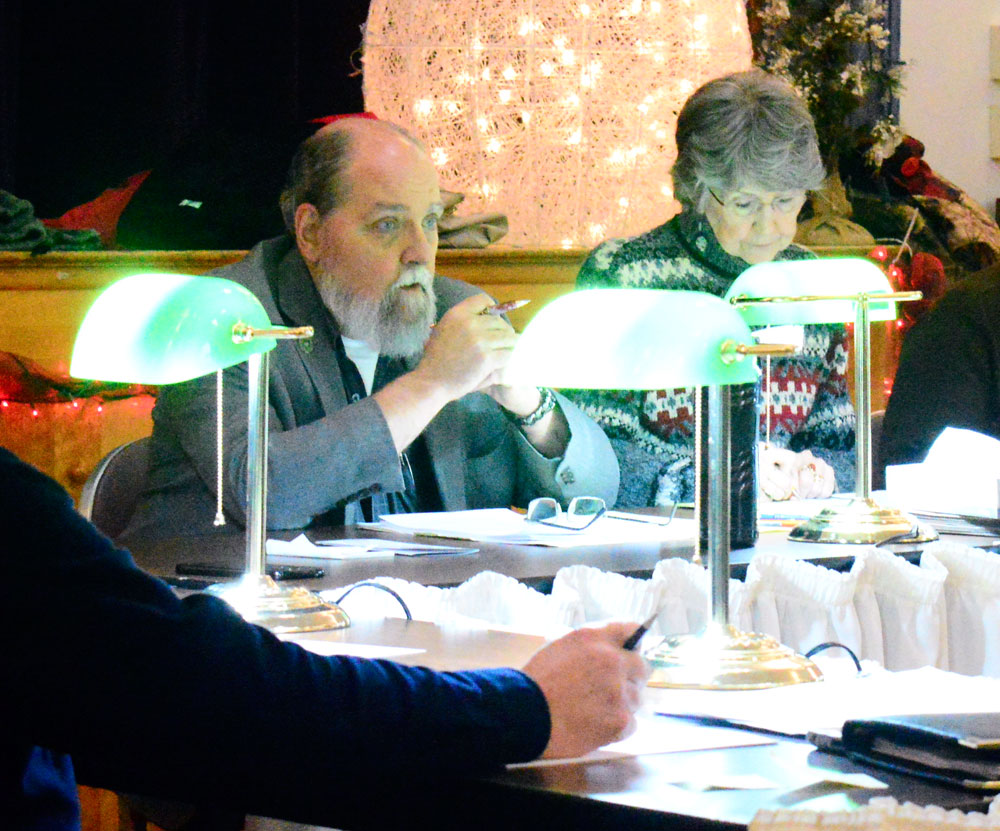 “I would be the first to say that they do a commendable, very commendable job,” Seaman said.

NYSEG spokesman Kevin Ortiz wants to correct what caused the outages last weekend. Newcomb town Supervisor Robin DeLoria had said the cause was trouble at the Deerland switch between the Harris Lake substation in Newcomb and the town of Long Lake. Ortiz said the outage had nothing to do with a switch or the generators, and the reason the outage lasted so long was because a 70-foot tree fell on the wires during the storm.

At the meeting, Seaman said the utility corridor right of way where the power lines run should be pre-emptively cleared of trees that pose a threat.

There has also been a problem with Frontier phones and AT&T broadband going down at the same time as the electricity, cutting off communication. That is because AT&T uses Frontier lines to bring its broadband into the area. Verizon runs off a fiber-connected tower.

Frontier has a backup generator, but two times in recent months it did not kick on when needed. Seaman said this is because the technician had not been checking on it and the battery went dead. He has been assured it has been replaced.

Seaman gave residents an idea of the situation the town faces: a single line of electrical connection, an electric supplier that he said is not easy to work with and freezing winter conditions.

Power outages are not uncommon in Long Lake, which gets its feed from National Grid through a line from Old Forge, but there have been at least six days with lost power in November alone. Newcomb, Blue Mountain Lake and Raquette Lake are powered this way, too. Newcomb has a backup generator that powers the towns when the main feed is interrupted, but several times in the past six months it has failed to kick on.

“With a few exceptions, the generators have worked as intended,” Ortiz wrote.

Seaman said Long Lake is lucky to have a generator to run on when power lines are down. Back in 2015, the old generator, which had been there since the 1960s, was not sufficient, a new one was installed and has had trouble since it was started. Both generators run at the same time, and Seaman said it took a few years and two contractors to get them to run in phase. Now, he said the generator tends to trip out when it senses a power surge.

One of these days was Black Friday, when the power was out for seven hours on one of the biggest shopping days of the year. Several local business owners at the meeting commented on how they likely had lost customers and sales that day.

In November there were outages on the 9th for 15 minutes, the 10th for 45 minutes in the early morning and over four hours in the afternoon, the 23rd for seven hours coming off a morning with temperatures 14 degrees below zero, the 25th for three hours, the 28th for two non-consecutive hours, and the 29th, the day of the meeting, for two non-consecutive hours and then two hours.

Residents have been calling and writing letters to NYSEG, state agencies and politicians for months now, and Seaman said he has personally been calling NYSEG for a year-and-a-half about the outages.

“You need to elevate this to the level of the governor,” Seaman said.

On their own, Long Lakers are preparing a mass mailing campaign. Lorraine Spangler created a list of dates and times of outages to help letter writers be accurate and consistent.

Seaman has talked with state Sen. Jim Tedisco, R-Glenville, who said the situation was not acceptable and wrote a letter of his own to Gov. Andrew Cuomo on Nov. 26.

“I have reached out numerous times to NYSEG, Frontier and the Public Service Commission about this public safety issue and all I hear are crickets!” Tedisco wrote in the letter. “I contacted [Public Service Commission] last summer and was told staff was ‘monitoring these situations in the Long Lake area.’ How long do we take to monitor before implementing a sound and long-term solution? My fear is a death from a power outage will expedite results.”

Tedisco’s letter asks for an investigation into the matter with NYSEG and Frontier, and to make sure the Public Service Commission knows it is a high priority.

All of this is against the background of several Hamilton County towns taking issue with NYSEG’s new management, and NYSEG employees feeling it has been doing a good job covering such a complex area.

The Connecticut-based company was bought by Avangrid Inc. in 2015, combining several existing gas and electric companies with Iberdrola USA, a company from Spain.

“Service has gotten much worse. I hear it from constituents throughout the community,” Seaman said. “There is a NYSEG crew here in town. … Local guys that work for them. And they’re good. They’re very good. In fact, if they just let them do their job, I think we’d be much further ahead.”

Seaman said he remembered when he used to be able to call up a local crew member, tell him a street light was out, and it would get done. Now they need to find the pole numbers, sometimes in the snow, submit a work order and sometimes even have a crew come from out of the area.

“I dispute their assertion that there is poor communication,” Ortiz wrote in an email. “We are in constant contact with the town supervisors and will continue to engage them on a regular basis. As you may know, there are challenges we face providing power to this particular area due to the fact that it’s a radial circuit, that is, a circuit that does not connect to another circuit. It’s why we placed the generators there.”

“I asked a NYSEG rep to be here this evening. She declined,” Seaman said at the meeting. “Who’s surprised?”

Seaman said he will attend a meeting later in December with Long Lake’s outgoing Assemblyman Marc Butler, his successor Robert Smullen, representatives from NYSEG and the Public Service Commission, and other town supervisors.

Seaman said he tried to make it a public meeting, but it will not be open. When residents protested, saying, “It’s a public service,” he explained that because private companies are involved, it is up to them.

“At this point in time I’m told it is not going to be a public meeting. In fact, I don’t know if some of the key players would show up if it was a public meeting, and that wouldn’t benefit us at all,” Seaman said. “If it were up to me, we’d all be sitting here at the table right now.”

In the meantime, in the case of a long-term outage, Seaman said the town hall will be the meeting place for people in need of supplies, food and warmth. Barbara Taylor, a coordinator for Hamilton County emergency preparedness, said she is working to create a county-wide vulnerable persons registry through the Office for the Aging. This will be a list of people to check on during an outage and see of the person needs help or supplies.

Forms to be get on the list will be delivered by Meals on Wheels, in health centers, newsletters and libraries. It was also suggested that the forms be sent to everyone in Long Lake through the water department, which doubles as the town’s emergency contact database because it bills to every house in town.

“We will conduct a thorough analysis of what happened over the past week and will do everything we can to provide our customers with the best service possible,” Ortiz wrote.