Washboard is more than a novelty shop; it’s a hub for conversation, tourists and pastries 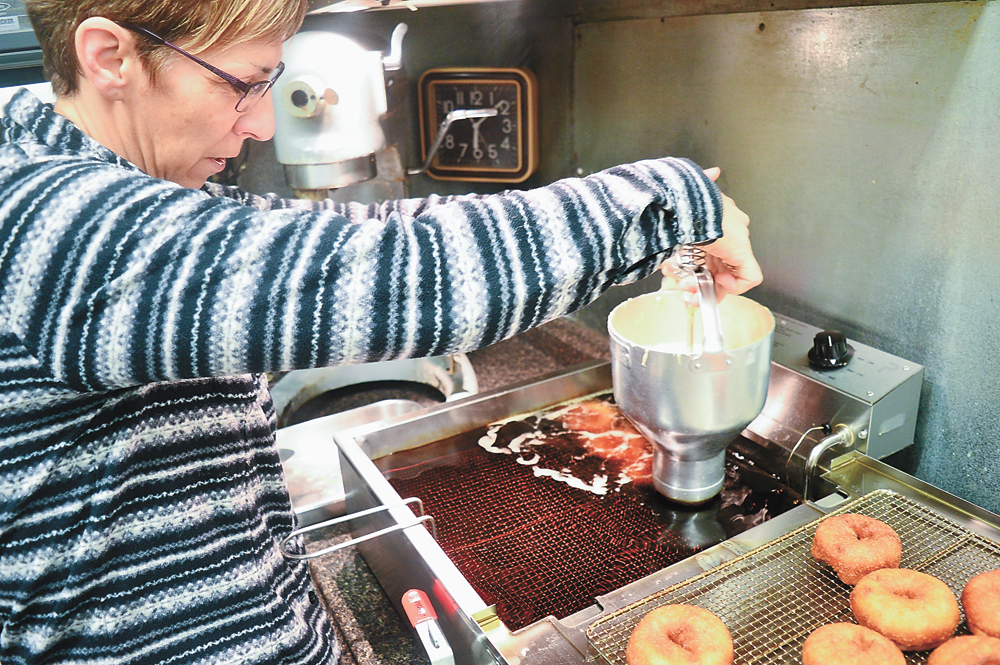 TUPPER LAKE — At 5:30 in the morning, seven days a week, Tina Merrihew is hard at work starting the first batch of Washboard doughnuts.

You may have eaten some at a wedding, heard about them on NPR or grabbed a few while picking up a load of laundry. Washboard doughnuts are well-known around the Tri-Lakes for their old-fashioned style, unique frosting flavors and even more unique baking location: inside a laundromat.

When Merrihew’s dad, Ed, purchased the laundromat from Paul Smith’s College professor Bob Ringrose in December 1990, the building — a former grocery store — already had a kitchen where Ringrost had made doughnuts, and had been a coffee and conversation meeting place for him. Ringrose died at this time last year at 84 years old.

The strange combination is part of what brings in customers, and Tina has heard all their jokes: “Do you ever accidentally put detergent in the doughnuts? Does anyone wash their clothes with flour? You must get sick of doughnuts.”

“I don’t even know how to answer some people,” Tina said. “They’ll come in and ask, ‘How many doughnuts have you made?’ That’s nuts! Why would I even keep track of that?” 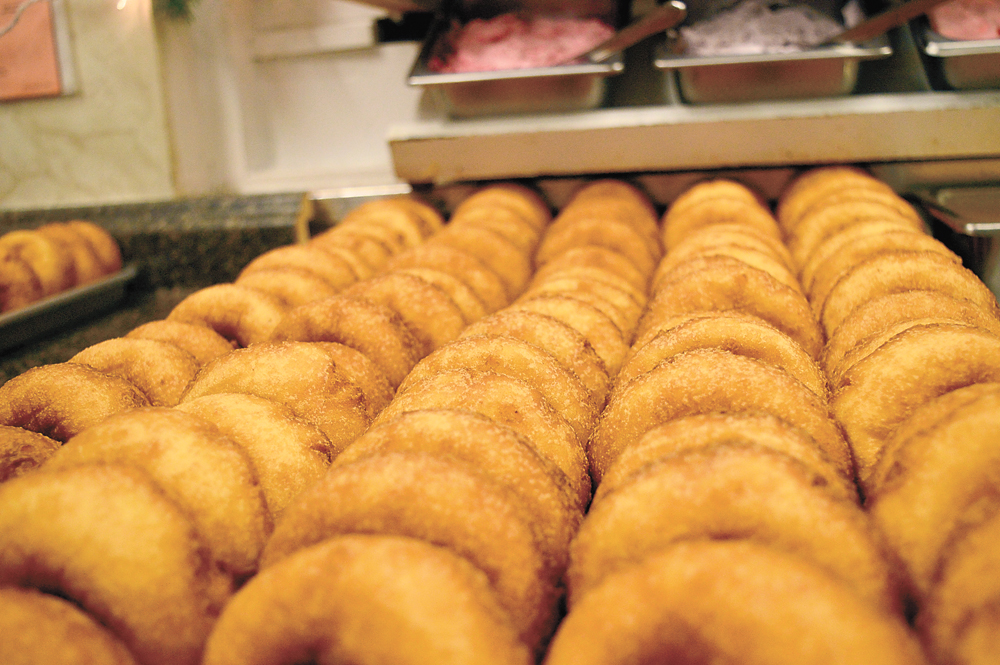 Just because she has heard all the humorous comments before does not mean there’s nothing to talk about. Tina carries on Ringrose’s coffee and conversation tradition, ready to strike up a conversation about the 1970s Volkswagen Beetle she used to drive around in, film photography or skiing at the Big Tupper Ski Area.

Ed ran the ski area for years and bought the Washboard from Ringrose after the town sold the mountain.

Tina remembers cooking doughnuts as a kid, cutting the thick dough by hand and cooking them in a frying pan in her kitchen at home. Now, for nearly 29 years, she and her father have been frying between 12 and 50 dozen of the cakes morning after morning.

For the record, Tina does not get sick of making doughnuts, and no great pastry/laundry mix-ups have occurred thus far. Though doughnut making is a business for her, it’s one she enjoys. It is also a science she has worked hard to perfect. She listed all the factors she takes into account while cooking up a batch on a snowy Nov. 27 morning.

Many doughnut mixes can be too greasy, Tina said, and it is important to find one that, with the right mix of water, will produce a doughnut crispy on the outside and not too moist on the inside. 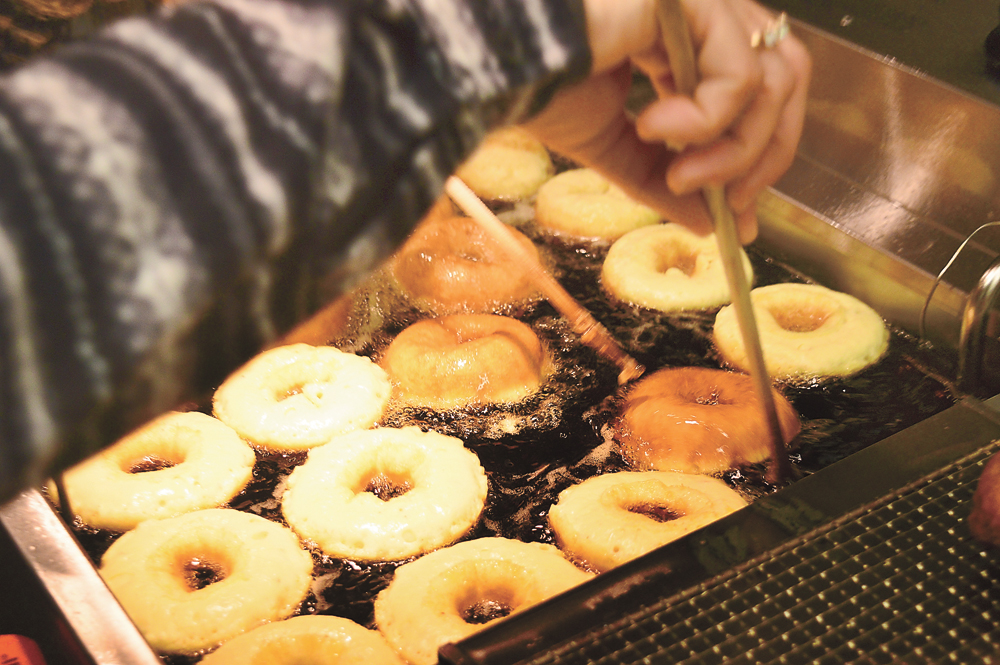 Tina Merrihew flips a batch of doughnuts in oil. She bakes all the pastries in the morning this time of year, but in the summer she bakes from 5:30 a.m. right through 4 p.m. (Enterprise photo — Aaron Cerbone)

She has also taken flavor and consistency into account when picking new mixes after old ones were discontinued. The “million dollar mix” she currently uses is $5 more expensive than her other choice but produces a much more reliable product. Everything from the mixture-to-water ratio to the temperature can alter the final product’s size, shape, consistency and flavor.

Tina takes care to ensure delicious doughnuts and it pays off later in the morning as customers start rolling in to do laundry or just pick up a morning snack.

The building also has a gift shop full of Ed’s wooden and antlered chandeliers, Native American artwork and Adirondack knickknacks.

Ed, who has a bit of Native American blood in him, collects traditional artwork in his travels around the country. Tina said their travels once brought them to a laundromat/bakery in a small town in Colorado, the only other one she knows of.

Tina said Ed plans to retire a few years down the line, hand the ownership off to her and her husband Michael, and maybe focus more on woodworking. Michael also does woodworking. 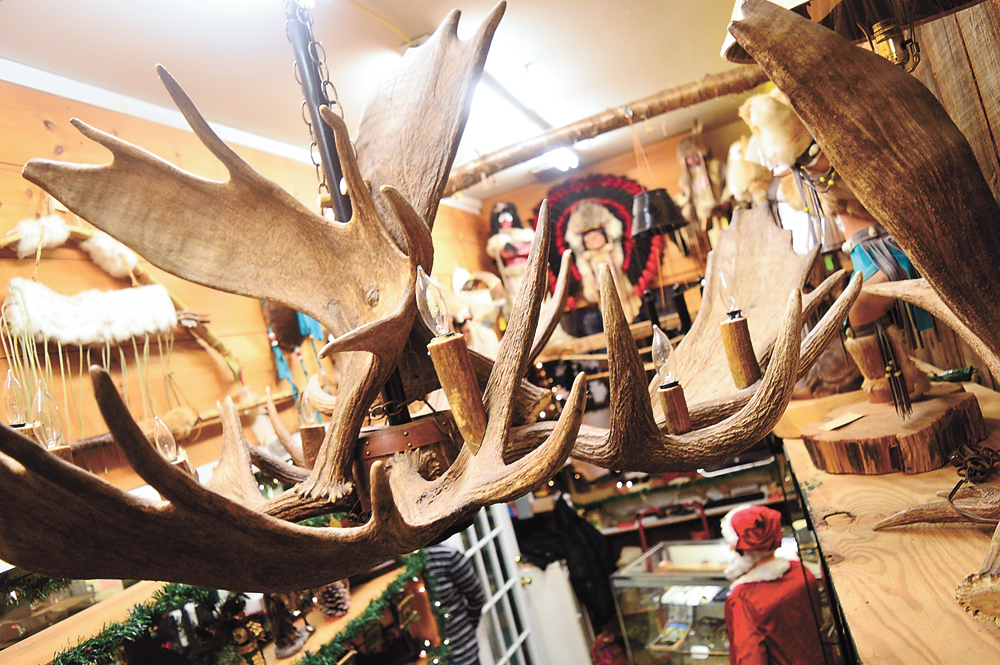 The shop’s most popular doughnut is the one with maple bacon frosting, a customer-suggested flavor which has seen several iterations over the years. Tina said she likes cinnamon the most.

“You can’t beat the cinnamon when it’s warm,” Tina said, describing how the spice starts melting into the hot dough.

Back in January 2015, North Country Public Radio reporter David Sommerstein stopped into the Washboard to do a “Heard Up North” interview with Tina. He returned for a second helping in August of that year to do a piece that was aired nationally on NPR.

After this segment aired, Tina said people turned out from all over to get a taste of the cakes. The unconventional combo is a draw for tourists to both the Washboard and Tupper Lake. Sometimes, vacationers stop in without knowing about the dual-purpose shop.

“I always turn around and say, ‘You won’t forget it, will ya?'” Tina said.

And they don’t. Tina said the Washboard gets repeat customers summer after summer.