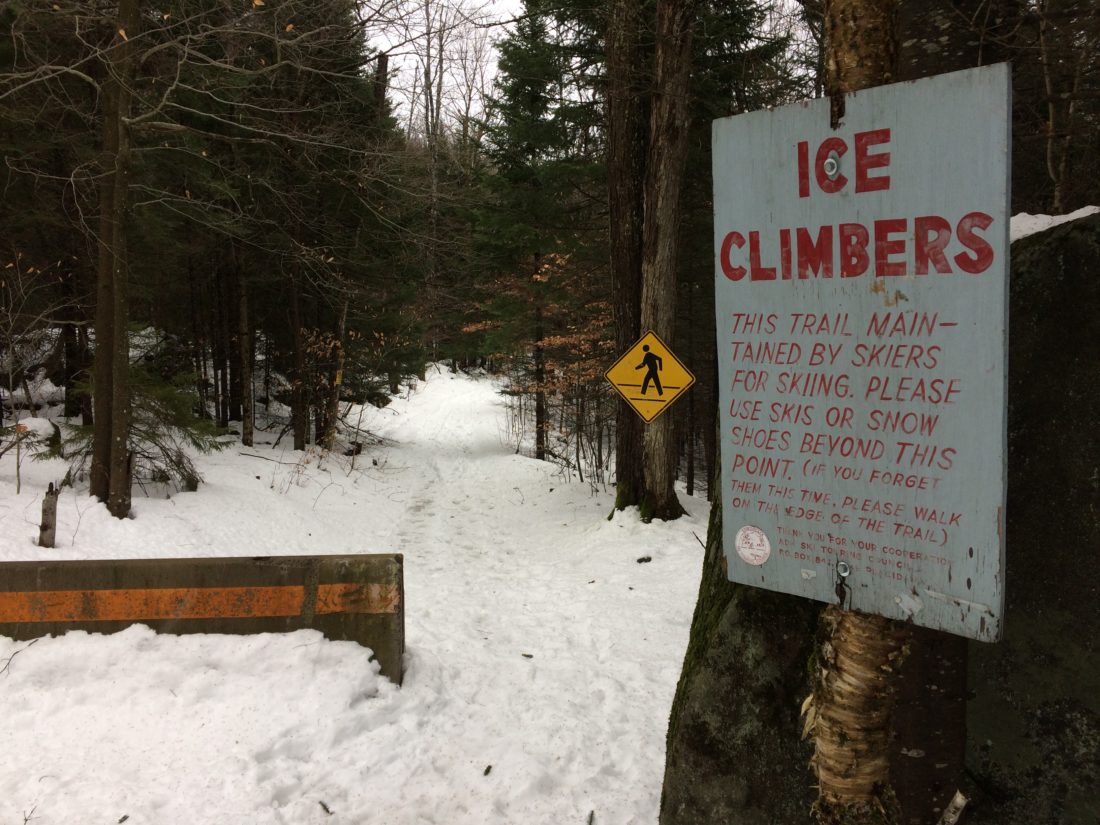 A sign asking people to not walk in ski tracks is seen at the beginning of Old Mountain Road outside Lake Placid. (Enterprise photo — Justin A. Levine)

LAKE PLACID — Old Mountain Road, a historic highway that was — until recently — part of a state wilderness area, has been returned to two local towns after more than a decade-long legal battle.

The road became contested in 2003, when Lake Placid resident Jim McCulley drove his snowmobile on the road, which he claimed was a town road and therefore could not be closed by the state Department of Environmental Conservation as part of its Sentinel Range Wilderness Area.

The road is in both of the towns of North Elba and Keene, and runs roughly parallel to state Route 73 on the northern side of Pitchoff Mountain. McCulley’s subsequent ticket for operating a motor vehicle in a wilderness area sparked a 15-year legal battle that has now come to an end.

McCulley was found guilty, but that was overturned after an appeal found insufficient evidence that the road had been legally abandoned by the towns. Court decisions continued to uphold that the road belonged to the towns, and for a number of years the DEC agreed.

But in 2015, then-DEC Commissioner Joe Martens vacated the decision and concluded that the DEC was correct in saying Old Mountain Road was an abandoned town road that had no legal right of way for public use.

North Elba filed a lawsuit contesting Martens’ decision, and that suit was unanimously affirmed in state court in March of this year. Recently, the DEC did not appeal the March Appellate Division ruling, effectively ending the case.

Town supervisors Joe Pete Wilson of Keene and Roby Politi of North Elba each said that, now that the road is definitively in the hands of the towns, there are no plans to change its usage. The road is largely used for cross country skiing on the Jackrabbit Trail, and also provides access to rock and ice climbing.

“We’re happy to have things clarified so we understand our ownership,” Wilson said. “At the same time, we don’t have any plans to change the way it’s managed. We’re not opening it up to additional uses.

Wilson said the towns have been working with both the AuSable River Association and Barkeater Trails Alliance — which manages and maintains the Jackrabbit Trail — to upgrade some stream crossings in an effort to improve recreation as well as ecological aspects.

“The town is really positioned to do that, so I think we’re going to be a really good steward of that,” he said. “We’re in agreement with the DEC about how to manage this. Both towns and the DEC are on the same page.”

Politi said the lawsuit was purely about property rights and was never intended to open the road to new uses.

“We won the case, and it was all about property rights,” he said. “The town owns the road, and it is our intention that the road will be utilized for cross-country skiing and non-motorized traffic.

“It’s clear: The road is ours. They’ll (DEC will) want to utilize the road at some point if someone get hurts on the ice climbing slides, and we have no problem with emergency personnel utilizing it. But other than that, it’s for skiing and walking and hiking. And that’s not going to change.”

Politi said the town also wants to add an historical marker at some point noting that the road was how abolitionist John Brown’s body was returned to his North Elba farm for burial after his hanging in 1859.

In an email, the DEC said the ruling would have no effect on the wilderness area unless the towns decide to allow some sort of motorized use.

“This action has no effect on the boundary of the Sentinel Range Wilderness,” DEC spokeswoman Erica Ringewald wrote. “However, the road will be required to be reclassified as a primitive corridor if there is any intent to allow motor vehicle use.

“After reviewing the March 2018 decision, DEC determined that we would not pursue an appeal, rather will continue working with local partners to achieve an appropriate resolution of this issue without further litigation. The State and DEC are committed to working with the town to determine appropriate future uses of the Old Mountain Road.”