The Wastewater Plant is seen from the back of the facility Tuesday in Saranac Lake. In the center of the frame are the aeration basins. (Enterprise photo — Jesse Adcock)

Saranac Lake Wastewater Treatment Plant chief operator Kevin Pratt leans on the railing of a clarifier on Tuesday. It will be converted into a gravity thickener once a new clarifier is built. (Enterprise photo — Jesse Adcock)

Saranac Lake Wastewater Treatment Plant chief operator Kevin Pratt leans on the railing of a clarifier on Tuesday. It will be converted into a gravity thickener once a new clarifier is built. (Enterprise photo — Jesse Adcock)

SARANAC LAKE — A $1.2 million grant awarded to this village, announced by Gov. Andrew Cuomo Nov. 16, is going towards a larger $8 million group of projects at the Saranac Lake Wastewater Treatment Plant.

The goal is to build an ultraviolet treatment facility that would cook out any remaining micro-organisms that survive the village’s current wastewater treatment process, and build an additional $4 million clarifier, both by 2022.

The UV system is necessary because of a 2017 state Department of Environmental Conservation mandate that all wastewater plants in New York have an additional step of water purification by 2022.

“They’re getting every plant in the state to get some kind of disinfection, whether it’s UV or chlorine,” the plant’s chief operator Kevin Pratt said. “But we’re going to be going with UV disinfection.” 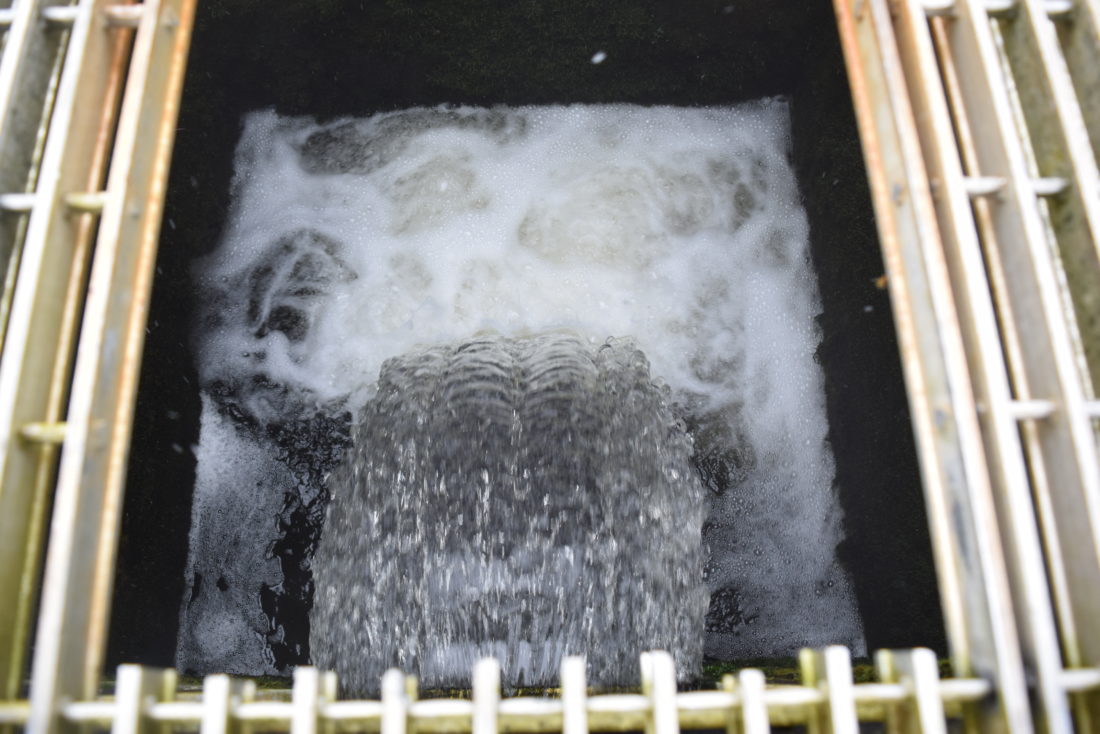 In the last five years, $16 million in projects have been undertaken in the village. (Correction: An earlier version of this article incorrectly said all $16 million worth of projects took place at the wastewater plant.) According to village Manager John Sweeney, “We’ve covered almost 50 percent of the project cost, this included — 50 percent of $16 million.”

He said having projects shovel-ready is the most important part of getting federal and state grants, as the way government funding is awarded has changed. Sweeney said this kind of infrastructure used to be pushed to its breaking point, then rebuilt.

“You’d run a plant into the ground 25 years,” Sweeney said. “At 25 years, somebody comes in, bails you out; then you run it back into the ground. That’s not how it works anymore. We’ve learned that process 15 years ago.”

Now prospective projects are studied, applied for and built in an ongoing process. There is currently an ongoing comprehensive evaluation of the plant to determine what future projects need to be addressed.

“Our job is to keep things operating the best we can while we’re working our way towards these upgrades,” Pratt said. “It’s much better to do an upgrade by a step-by-step process rather than take a whole the whole plant, and try to do the whole thing.” 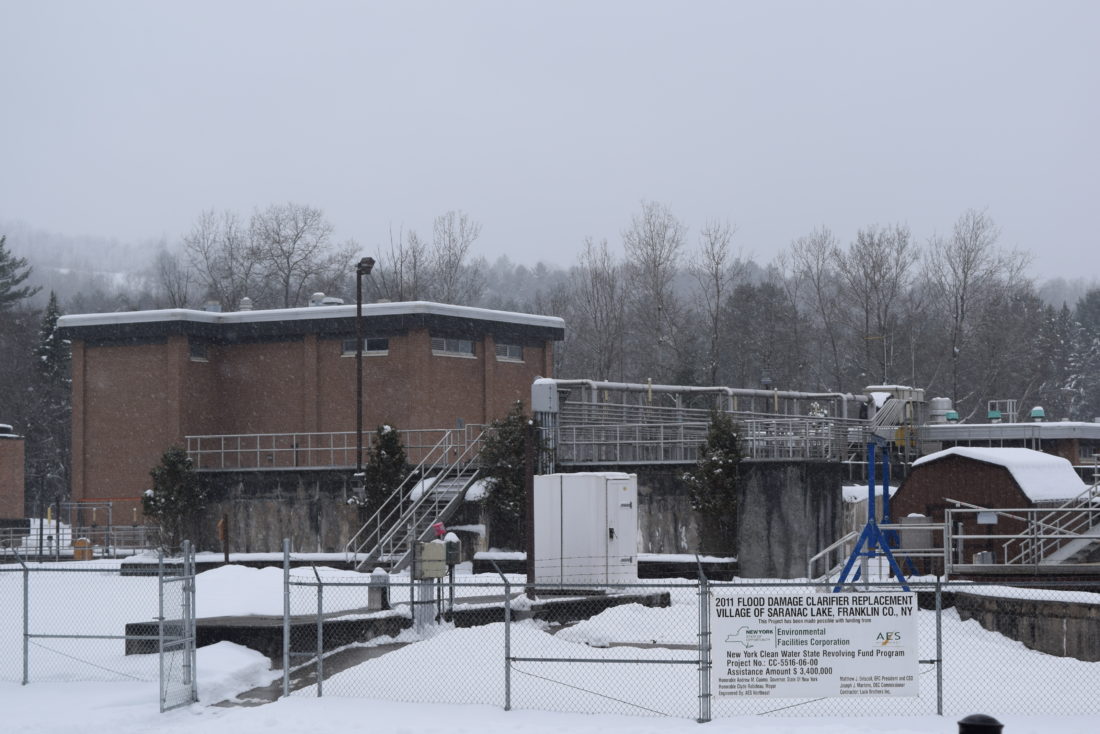 The Wastewater Plant is seen from the back of the facility Tuesday in Saranac Lake. In the center of the frame are the aeration basins. (Enterprise photo — Jesse Adcock)

In addition to grants, Saranac Lake has the potential for a zero-interest loan from the state Environmental Facilities Corporation for the remaining $4.3 million.

It is hard to understand the use of the UV treatment facility and the extra clarifier without a quick and simplistic outline of the process. Here’s how it starts:

“We are physically treating the sewage,” Pratt said. “That’s pretty much grit. You’ll see corn in there. Sand. Lot of the rags and stuff will end up in here, too.”

Next, the wastewater travels downward into a series of primary settling tanks, built in 1934. Oxygen is pumped through into the fluid, causing it to roil and froth. This disrupts the buoyancy of the fluid, making the heavier solids settle to the floor of the tank.

Until this step, the purification process has been powered by gravity and only physically filtrated. It is now pumped up into aeration basins for biological refinement. The concrete that houses these basins is chipped and weathered. In a few places, lattices of rebar are visible.

Pratt said last year an engineer “cleared them, they’re alright, but they’ve got to be dealt with sometime in the future.”

“There are actually little micro-organisms in here, feeding on the food that is coming in on the sewage,” Pratt said of the aeration basins. “Each one of these tanks holds 345,000 gallons, and they’re 16 feet deep. They’re pretty impressive when they’re empty.”

From there, the wastewater is pumped to the final clarifiers, producing two products: clear effluent water that’s pumped into the Saranac River, and sludge. The plant currently has two of these large, spherical basins.

One, built in 2016, is 80 feet in diameter. One of the plant’s $4 million goals is to build another like it. The other clarifier, built in 1993, while structurally sound, is too small for the volume of wastewater the plant handles, and not raised high enough to work with the incoming UV facility.

The plant had two other clarifiers, but they were wrecked in the spring 2011 flood.

“They had, in essence, acted like bathtubs; the water underneath had lifted them up,” Sweeney said.

“They floated, and any of the concrete seams broke right off,” Pratt said. “Water running everywhere.”

The 2011 flood caused an estimated $5 million worth of damage to the village and taught engineers a hard lesson: Build to 500-year flood marks. To that end, the newer clarifier was built 18 inches higher.

“Part of the design for the UV, too, all that is going to get raised up,” Pratt said. “That’s why that clarifier (the old one) won’t work with UV, because it sits too low and it won’t have the hydraulics to flow through the UV system. A second final clarifier is needed.”

The old clarifier won’t be scrapped — it will instead be converted into a new gravity thickener, used to concentrate the sludge produced by the clarifiers.

Also with this project, the outflow pipe that carries the effluent to the river will be replaced.

“It starts all with a study, somehow,” Sweeney said. “We get a grant for a study. We enact the study. Then you get into another set of grants, if you do it properly. And that’s what we’ve been very successful at. It’s a process.”