Sink hole found in spring, repair to concrete wall should be done this fall

This aerial view shows the Bartlett Carry Dam, which is undergoing renovations on its northern wing wall (far left) after a sink hole was discovered in the spring. (Photo provided by Upper Saranac Foundation) 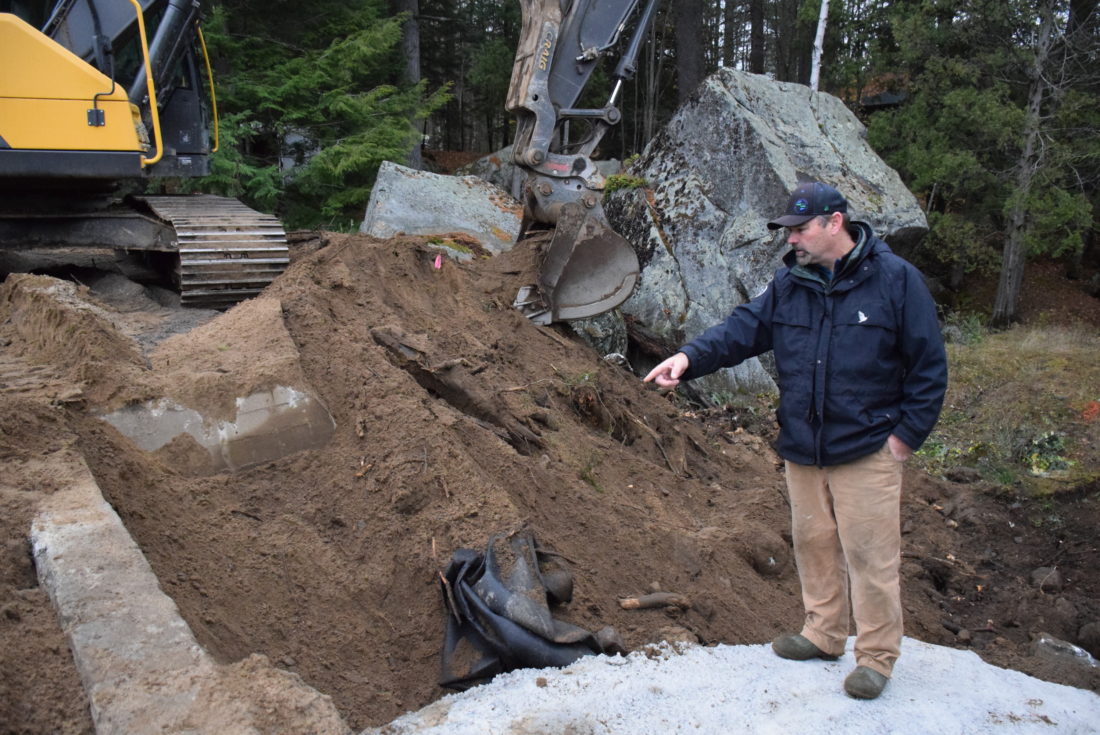 Guy Middleton, of the Upper Saranac Foundation, points to a roughly century-old concrete wall that is being repaired on the Bartlett Carry Dam. (Enterprise photo — Justin A. Levine)

SARANAC LAKE — The Bartlett Carry Dam, which impounds the sixth largest lake in the Adirondacks, is undergoing major renovations after a sink hole was discovered earlier this year.

The dam keeps Upper Saranac Lake in check, which is important considering what is downstream of the lake. From the dam, the lake flows through the Saranac Lakes chain and eventually ends up in the village of Saranac Lake, where the water spills over the Lake Flower dam on its way to Lake Champlain.

Guy Middleton, lake manager for the Upper Saranac Foundation, said a sink hole discovered in the spring led to emergency measures which culminated in a complete overhaul of the north side of the impoundment.

“In early May, we found a sink hole where water was coming through this northern embankment,” he said. “We were concerned about that (so) we enacted our emergency action plan. We did some sand-bagging, made an impromptu coffer dam and sealed off the embankment.”

Middleton said over the summer, the Upper Saranac Foundation contracted with an engineer that did test pits and bore holes to determine the extent of the problem. Once the engineering report was done, the foundation put out requests for proposals and hired J. E. Sheehan of Potsdam to conduct the work. 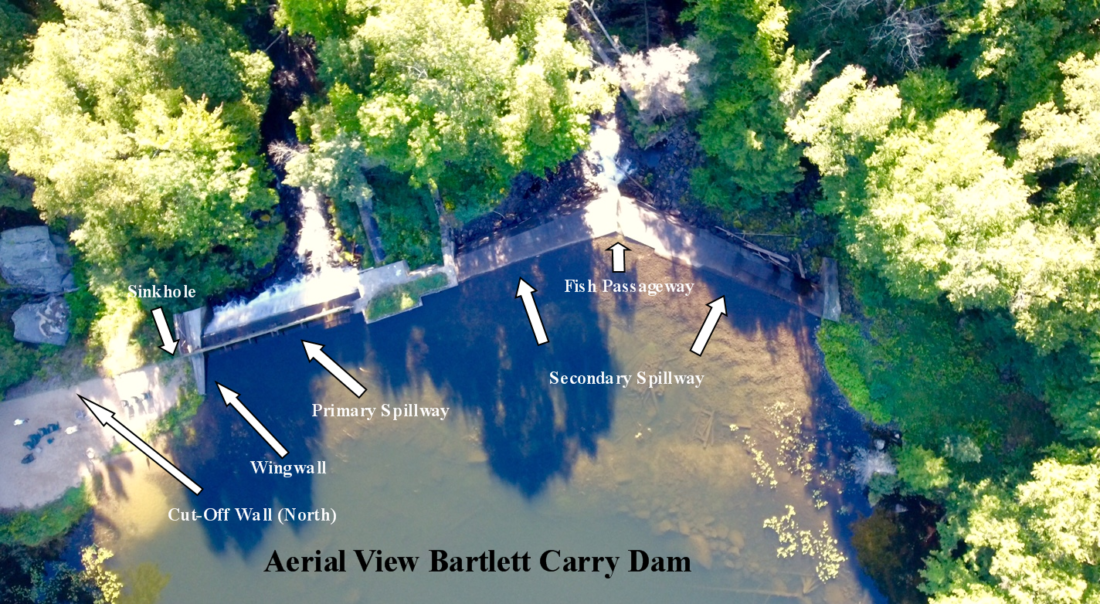 This aerial view shows the Bartlett Carry Dam, which is undergoing renovations on its northern wing wall (far left) after a sink hole was discovered in the spring. (Photo provided by Upper Saranac Foundation)

“In October, we started construction,” Middleton said. “It took quite a bit of planning to get the fundraising and then get the permitting and the contractor in here to get this all done before winter.”

The work being done this fall is expected to cost $300,000, which Middleton said was raised by hundreds of private shore owners.

“As a dam owner, we are responsible for this dam,” he said. “Our emergency action plan takes into consideration everything from the village — Lake Flower — to this dam.”

Access to the damaged part of the dam is through the private Bartlett Carry Club, and Middleton said the short road to the north embankment would be removed and the area put back essentially the way it was.

The dam dates back to the 1800s, and a long concrete wall that was buried inside the dam was found to be in bad shape after the sink hole was discovered. The area was excavated and Middleton said the first pour of new concrete was 30 yards, or about 120,000 pounds of concrete. The contractors are excavating the wall one section at a time and each section will be evaluated and repaired as needed. Middleton said the concrete wall is likely from the early 1900s.

“On the back side of that wall, it was just sand,” he said. “We’re starting to fill that with stones. So if there is ever any water that flows through that concrete wall, it doesn’t flow like sand does; it wouldn’t pipe out like the sand does.”

The dam itself is 122 feet long and at one point was used for hydroelectric production, though the electric plant is just a relic now.

Middleton said the project should last a few weeks, and that the site may be “refurbished” in the spring.