Tedra Cobb pledges to be an ‘independent voice’ 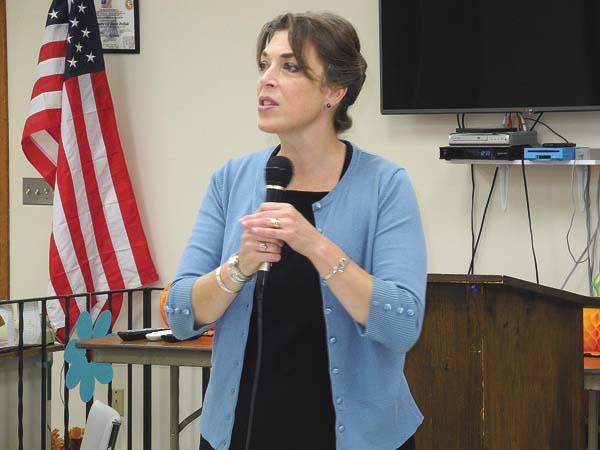 Democratic congressional candidate Tedra Cobb of Canton gives an informational presentation to the 50 Plus Club Thursday at the Johnstown Senior Center. (Photo — Michael Anich, The Leader-Herald)

JOHNSTOWN — Democratic Congressional candidate Tedra L. Cobb made a campaign stop in the city Thursday, telling seniors she’ll be an independent voice in Washington D.C., free of high-priced political donors and groups like the NRA.

“I’m not going to be beholden to anyone but you,” Cobb stated.

She told the group she gets “zero dollars” from pharmaceutical and insurance companies, or Wall Street. People beholden to those entities are “what’s wrong with Congress,” she said.

Hailing from Canton, Cobb noted she has been in the Fulton County area eight to 10 times since she began running a year ago. The St. Lawrence County woman — who ran a community health agency and is a former county legislator — captured the 21st Congressional District’s Democratic nomination June 26 by defeating five opponents: Dylan Ratigan, Katie Wilson, Emily Martz, Patrick Nelson, and Don Boyajian.

Cobb gave a brief biographical sketch of herself, and went on to discuss some issues impacting the expansive, mostly rural 21st Congressional District.

Cobb said Stefanik is a sponsor of concealed gun legislation, and is part of the Congress that cuts funding for mental health.

“This district is not just an area on a map for me,” the candidate said.

She stated: “I’m here today because Elise Stefanik has turned her back on the people she’s supposed to protect.” She claimed her opponent has voted in Congress to kick 64,000 people off the Affordable Care Act, known commonly as Obamacare. She told seniors that Stefanik also wants to privatize Social Security and make Medicare a voucher system.

“This is not about me being nice or not nice,” she said.

Cobb said she’s against negative campaigning, “but I will speak out about that person’s record.” Cobb said she wants to represent only the interests of 21st Congressional District residents.

“This district is pretty much rural America,” she said.

In a question and answer period, Cobb stressed she tries to be as open as she can with voters.

“We all want a voice,” she said. “And we want our representatives to listen to us.”

On the question of campaign reform, Cobb said system changes can engage more people. She said she has raised money for her campaign in a grassroots way from ordinary people.

Cobb said this is the year Democratic candidates like her — financed by a lack of corporate money — will take back Congress. She said she is also on the Working Families and Women’s Equality lines. She said she has received no money from the National Democratic Party and she has a group of 1,800 volunteers, including teenagers. She has a goal of reaching 100,000 people by the end of the campaign.

“We have to work hard,” Cobb said. “We need to get out older people, middle age people and millennials.”

One woman said that even with insurance, her medicine costs spike higher than ever.

On the subject of education, Cobb said: “Public schools take priority over vouchers.” She said 20 to 25 percent of school district costs are for health care.

“We need to fundamentally change health care in this country,” she said. “Schools do not need to be an afterthought.”

But Cobb acknowledged the only way to change the health care system is to work together.

“We have got to find that compassion to agree with people we don’t always agree with,” she said.

Prodded by a club member, Cobb said she believes Stefanik doesn’t actually live in the district. She said her opponent’s mother owns a camp in Willsboro — Stefanik’s only connection to the district.

“I am here because I want to be your representative,’ Cobb said.