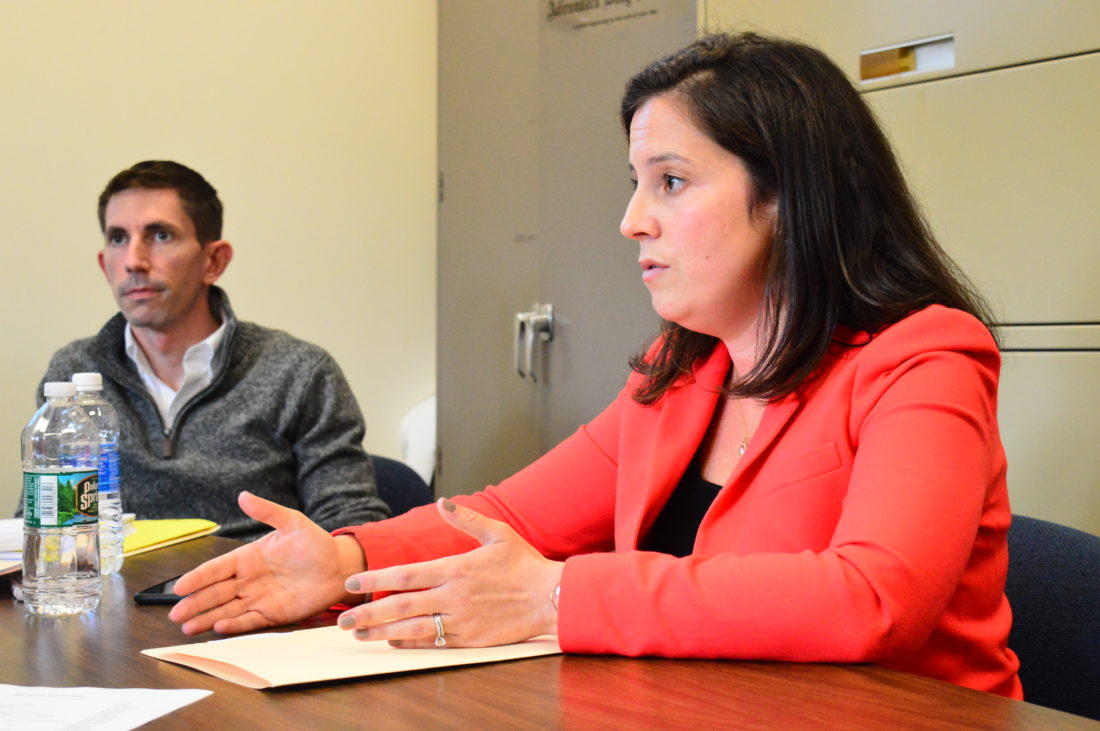 SARANAC LAKE — U.S. Rep. Elise Stefanik is often hailed as one of the most bipartisan members of Congress, ranking 27th out of 438 members in the Lugar Center’s 2017 index, the top 10 percent; so what does being bipartisan mean and how does she compare to her Democratic opponent Tedra Cobb?

Being bipartisan means sometimes voting against one’s own party majority, breaking with the ideology of its leadership, even the president.

Stefanik said she breaks with her party when she thinks a policy is out of touch with the district. For example, when President Donald Trump’s 2017 budget slashed funding for the Environmental Protection Agency, she voted against it.

She said she takes flack from her GOP peers for supporting the environment, but she is working to change that.

“I’m focused on trying to get Republicans up to speed on this issue,” Stefanik said. “I am the lead sponsor of Republican Climate Change Resolution, which forces Republicans on the record to acknowledge climate change is happening, is a problem, is science-based.”

Stefanik is mostly in line with Republican thought on the Second Amendment, earning an “A” rating from the National Rifle Association and the New York State Rifle and Pistol Association, based on her response to the NRA-Political Victory Fund candidate questionnaire, ranking her as “solidly pro-gun.”

Stefanik pointed out that her predecessor, Bill Owens, a Democrat, also had an “A” rating, and that Cobb scored with an “F,” labeling her as a “true enemy of gun owners’ rights.” Stefanik said this is because Cobb can’t define her position on guns.

While she is rated highly by the NRA and received a $1,000 donation from the organization in the 2016 election cycle, Stefanik, along with several other Republican members, broke with the majority to support the Fix NICS bill, which updated information sharing between federal agencies on “whether it has provided to the National Instant Criminal Background Check System disqualifying records of persons prohibited from receiving or possessing a firearm,” improving the sharing of mental health and criminal history records between states and agencies.

“Some members of the Republican conference did not want to see that pass,” Stefanik said. “I was one of the members that was supportive of making sure that information sharing in the background check system is working adequately.”

Stefanik said she wants to further strengthen background checks for firearms and said she was one of the first members of Congress to co-sponsor a bump stock ban. She also supported a bill that provides funding for school resource officers on a local level.

Stefanik said the donations she receives from organizations and interests groups do not influence her votes. She meets with certain groups, but has never had a bill, amendment or piece of legislation suggested to her by a donor.

“No campaign contribution should ever impact a decision you make, I mean, that’s illegal,” Stefanik said.

Stefanik spoke about several areas where she has differed from Republican leadership on.

On immigration, she said she thinks separating families who enter the country illegally is cruel, and said that an immigration reform package she cosponsored but did not pass, addressed that while including provisions for improved border security and visas.

She said she will try to pass the package again and until then will support a standalone bill that just addresses the separation issue, barring it.

“I’m glad the president has shifted his rhetoric on that issue,” Stefanik said.

She said she does not agree with the ideology of economic and military isolationism.

She also said the revision and resigning of the North American Free Trade Agreement (NAFTA) was a big win for the Trump administration that got lost in the media cycle. There was uncertainty over whether it would happen or not.

When asked how much of the credit Trump can take for a good economy, Stefanik said that Congress and the American people should get to take credit for it, too.

“But I think we’re doing a disservice when we always hold the president accountable for the economic growth except in this case,” Stefanik said. “So yes, I do think he deserves credit for being very focused on economic growth, and promoting manufacturing.”

Stefanik said she is trying to increase bipartisanship in Congress through her position as the National Republican Congressional Committee’s recruitment chair. She said the most bipartisan members tend to be women and she has recently nearly tripled the number of Republican women who are running for office, information that she said has not gotten much coverage.

Stefanik said she thinks it is good more women are running for office across the political spectrum. She believes many Democratic women are running in response to the 2016 presidential election, and that she is focused on making sure there are many Republican women running as well.

She said there is a lack of women in Congress, and especially in the Armed Services and Intelligence Committees where she is a member.

“It was pretty jarring when I was first elected … It’s one thing to read the numbers on a piece of paper about how few women there are, it’s another to walk into a room. I mean, it’s quite frequent that sometimes I’m the only woman at the table, particularly on national security issues,” Stefanik said.

The Enterprise’s editorial board interview took place on Oct. 5, a day before Supreme Court Justice Brett Kavanaugh was confirmed by the Senate, when women and politics were inseparable topics.

Stefanik said the Kavanaugh hearings were a broken process from the beginning, and that Sen. Dianne Feinstein should have turned the documents with sexual assault allegations from Dr. Christine Blasely Ford over to her colleagues and the bipartisan investigators who are part of nomination processes. She said it would be wrong to say how she would vote if she were on the Senate because she had not read the FBI’s investigation report, but said both Ford and Kavanaugh had “compelling” testimonies.

Within Congress itself, she said there has been a recent cultural shift around sexual assault following the revelation of sexual assault crises within the institution. She said education is very important and that every member of Congress and staff were required to take a sexual harassment training.

“It was quite shocking to me how a lot of people did not want to take that who are members of Congress,” Stefanik said.

She said this same cultural shift is happening in the business world and that she is currently on a bill barring businesses from having non-disclosure agreements in sexual assault cases.

A RAND Corp. study released in September revealed Fort Drum in Watertown ranks number one in the nation for the risk of sexual assault for women and number two for men.

Stefanik said sexual assault allegations should be handled inside the military chain of command because prosecution rates are low outside of chain of command and commanders have more flexibility to prosecute. She said to avoid corruption and cover-ups, those that mishandle cases should be censured.

She also supported the Sexual Harassment/Assault Response and Prevention (SHARP) program, which provides sexual assault education at the unit level.

Stefanik said bipartisanship led the current Congress to pass its earliest appropriations package it has passed in 22 years, earlier this month. She said compared to her first three years in office, where appropriations bills stalled and caused government shutdowns, things are running much more smoothly.

“There were always these cliffs for funding and appropriations and government shutdowns,” Stefanik said. “I know that’s a basic and that’s our job, but that’s a big deal that’s not getting a lot of credit.”