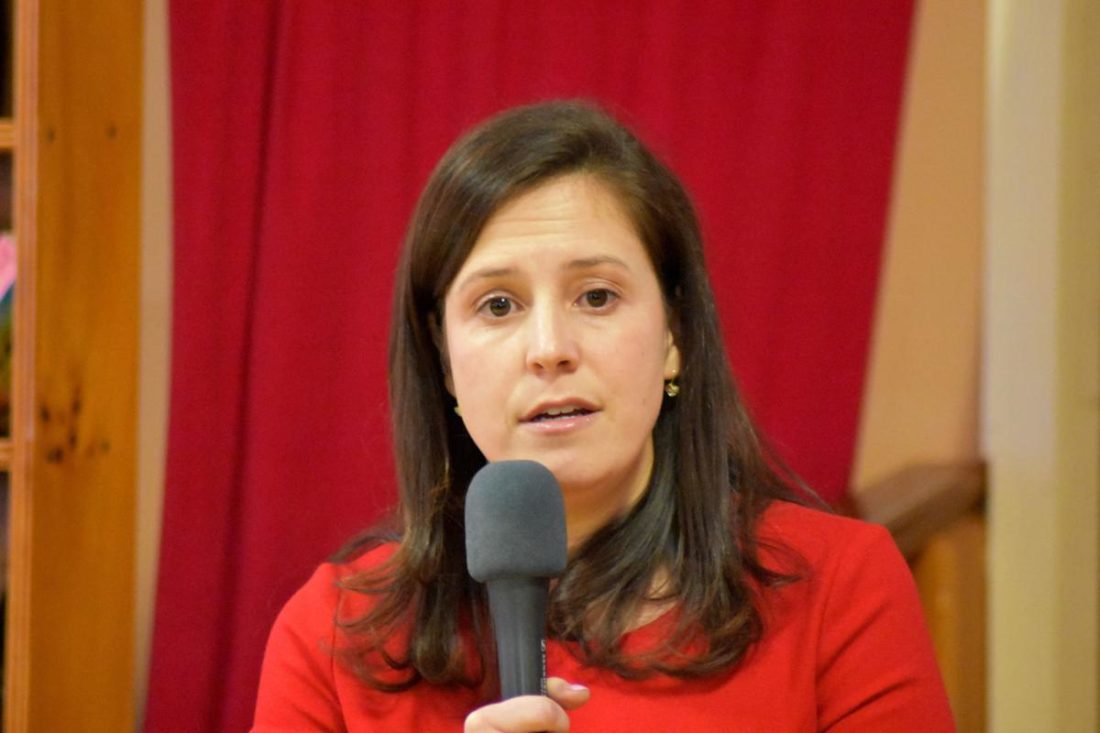 Rep. Elise Stefanik, R-Willsboro, speaks during a "Coffee with your Congresswoman" event on April 5 at the Moreau Community Center in South Glens Falls. (Photo — Kathleen Phalen-Tomaselli, The Post-Star)

On immigration, U.S. Rep. Elise M. Stefanik is still looking to achieve many of the same things she called for at the beginning of the year — in part because Congress has been unable to pass any of them yet. But Stefanik remains hopeful that Congress will start taking action on the immigration issues that affect her district and the country at large.

“One issue that is particularly important to our district is agricultural workers,” she said.

To remedy this, Stefanik is calling for a fundamental overhaul of the H-2A program that allows for year-round workers. She supports the H-2C visa, a replacement for H-2A that would have an 18-month limit for seasonal work and a 36-month limit for nonseasonal work, with “touchback” provisions outside the United States after the visa expires before they would be eligible for a new one.

Stefanik is also concerned with the Canadian border.

“Obviously this district is closely tied to and connected to the northern border,” she said.

Stefanik touted her success on passing a preclearance program for people crossing the northern border to clear up congestion and make commerce and travel easier. But it is not immigration or enforcement that most concerns her about the district’s border.

“The biggest issue on the northern border is trade,” she said.

“We’re hearing very positive feedback from across the district,” she said.

Pointing to the revisions that allow more U.S. milk to be sold in Canada, Stefanik said she appreciated Democratic support from the New York delegation.

“It’s an example of where I’ve worked with Senator (Charles E.) Schumer,” she said.

Stefanik is proud of her record on immigration, including joining 23 fellow Republicans in signing a discharge petition to force a vote on four immigration bills.

“I was one of the few Republicans who stepped up,” she said.

She said opponent, Democrat Tedra L. Cobb, has not put forth any immigration proposals.

All the reforms Stefanik was hoping Congress would pass over the summer were voted down, however, including a bill she voted for that gained no Democratic votes and which 112 Republican voted against as well. She remains optimistic, however.

“I do think it’s possible to come to a bipartisan consensus,” she said.

Asked what would need to be in an immigration bill for her to vote for it, Stefanik said it would need to provide border security funding, differentiate the southern and northern border policies, reform the guest worker visa program, provide legislation confirming the Deferred Action for Childhood Arrival program and end family separation at the border.

Stefanik thinks the legislation could be passed all at once or piece by piece — for example, she has supported a standalone three-page bill, introduced by Michigan Rep. Bill Huizenga, to end family separation.

“I think we need to get that bill through Congress,” she said.

Court orders have since ended separation of children from parents who were charged with crossing the border illegally and ordered them re-united, but solutions for families that cross the border illegally are complicated by the Flores settlement. This legally binding 1997 consent decree prevents children from being held in immigration detention for more than a few days.

Asked if Congress can overrule the Flores settlement to hold families together in detention centers, something Stefanik proposed over the summer, Stefanik said Congress should start with establishing what the law is.

“I think we need to clarify what is current law,” she said.

Stefanik also thinks that Congress needs to take a more active role in determining levels of refugee resettlement — last month, President Donald J. Trump announced no more than 45,000 refugees would be resettled next year, less than half of the highest resettlement year authorized under President Barack H. Obama.

“When the administration takes these actions, they should consult with Congress,” Stefanik said. “We fund these projects.”

Stefanik declined to say how many refugees she thought should be resettled, and said there should be proper vetting, but acknowledged that the United Nations resettlement vetting process was sufficient.

Asked about a broader solution for the millions of undocumented immigrants who do not fall under DACA, Stefanik reiterated her focus on a few issues –like DACA, family separation, and temporary worker visa reform — that she sees as key to the district and the country.

“Those are my priorities,” she said. “The broader immigration conversation has been going on for decades.”