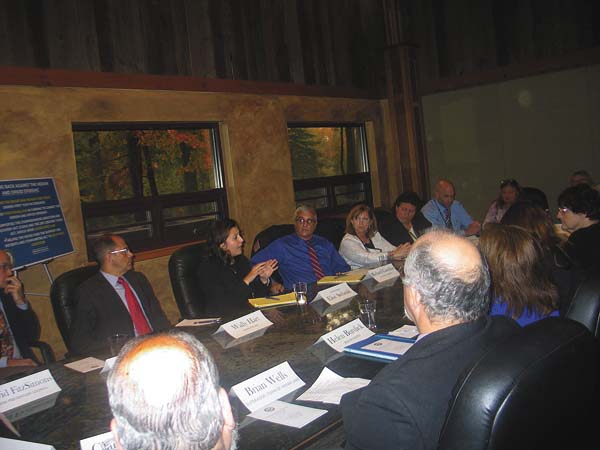 Congresswomen Elise Stefanik, center, hosts a roundtable on the opioids crisis at the Paul Nigra Center on Thursday. (Photo — Briana O'Hara, The Leader-Herald)

GLOVERSVILLE — With fatalities of opioid overdoses increasing, a roundtable was held at the Paul Nigra Center on Thursday with several local representatives from Fulton, Montgomery and Hamilton counties discussing the crisis.

Congresswoman Elise Stefanik and Fulton County Sheriff Richard Giardino hosted the roundtable in which several issues were raised on the opioid crisis including traces of fetanyl being found in opioids and now marijuana, lack of beds in inpatient treatment centers, lack of transportation services to recovery centers, insurance, mental health, recovery and prevention.

“In 2016, over 3,600 New Yorkers died of opioid overdose and in some counties in this congressional district, overdose fatalities have doubled and tripled in recent years,” Stefanik said.

“So I would think twice about legalizing marijuana right now because they’re adding fetanyl to marijuana,” Luck said.

Fulton County District Attorney Chad Brown touched on carfentanil and how they had their first case with it in the Capital Region. He said fetanyl and carfentanil are becoming dangerous to first responders, officers and probation officers because they are being exposed to these potentially deadly drugs.

He noted that the level of nuisance crimes such as criminal mischief, petit larceny and sometimes grand larceny are most times linked to people with an addiction.

“It’s blasted our resources and we have limited resources,” Brown said.

Helen Burdick, with the Beacon Center which provides recovery services, said a major problem has been getting women into an inpatient center due to the lack of beds for women. She said, as an example, there is one inpatient facility with 60 beds and 52 of them are reserved for men.

Stefanik asked whether the lack of beds is a funding issue at the state or federal level.

“What is the issue? Because there is clearly a need for more of these beds at recovery centers,” she said.

Burdick said she doesn’t think it is a funding issue, but more of a political issue because there is still a stigma when it comes to the opioid crisis and no one wants to admit that there is a problem in certain areas which prevents possible recovery centers opening, and residents not wanting facilities open near them.

“We just don’t have enough physical bodies to do it,” she said.

Another major issue is what insurance covers for people seeking inpatient care. Currently insurances cover seven to 14 days, which many of the representatives agreed is not enough time for someone seeking treatment.

“It’s a disease. What disease do we treat in 14 days?” said Truckenmiller.

Erinn Eschler, with the HFM Prevention Council, who also is a recovering addict, discussed some of her biggest fears when recovering and issues she faced.

“From my own experience, getting into treatment quickly was an obstacle,” Eschler said. “My fear was that if I failed in the outpatient program that I would die.”

She said she is proudly in recovery and recovery is possible for anyone.

When it comes to recovery and prevention, representatives all agreed that education is important along with educating family members.