Smoke on the wastewater

Steve Grimm, a New York Rural Water Association wastewater technician, pumps smoke into the sewer system in Tupper Lake to locate openings where rainwater can get in and put extra pressure on the system. (Enterprise photo — Aaron Cerbone)

Smoke rises from an uncovered sewage connection pipe in a lawn on state Route 3 as the Tupper Lake village water department tests the lines for cracks and illegal connections. (Enterprise photo — Aaron Cerbone) 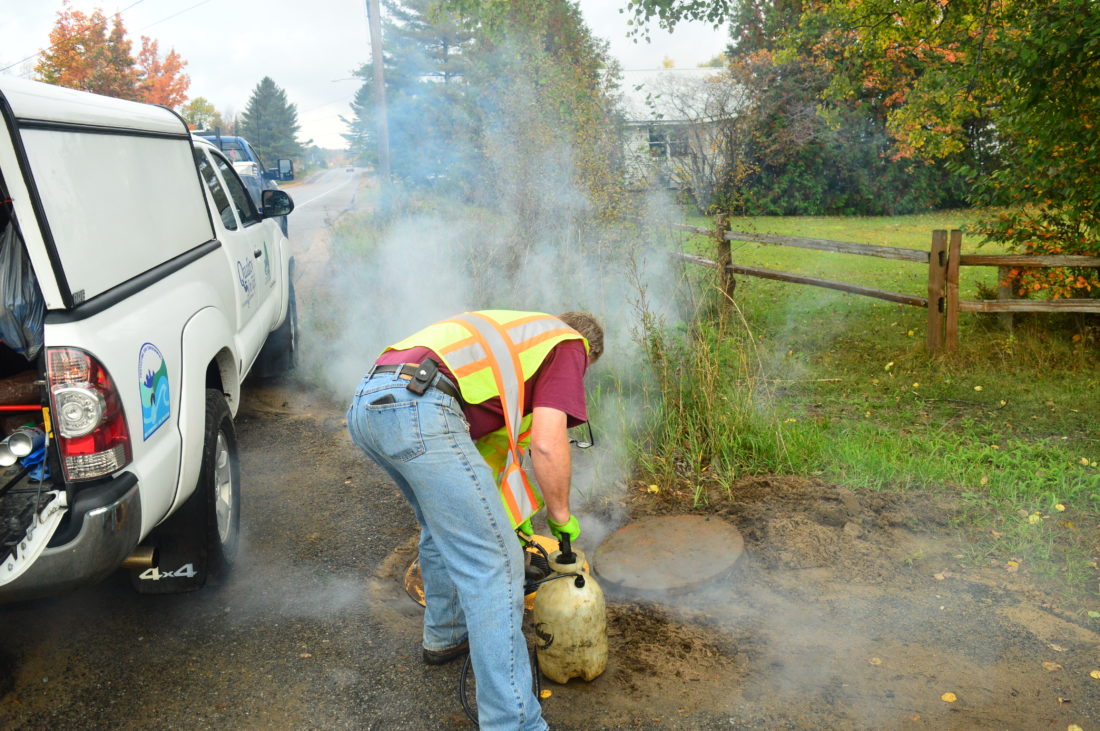 Steve Grimm, a New York Rural Water Association wastewater technician, pumps smoke into the sewer system in Tupper Lake to locate openings where rainwater can get in and put extra pressure on the system. (Enterprise photo — Aaron Cerbone)

TUPPER LAKE — The fan was switched on and smoke blown through a manhole on state Route 3 started shooting from roof vents on nearby houses, leaking from manhole covers down the street and rising from the ground in a front yard.

The village water department spent the past two days smoking out leaks, illegal connections and other sources of water inflow in its sewer lines by filling the system with a non-toxic, odorless “liquid smoke” and identifying areas where rainwater and groundwater fill the system.

Village water department Superintendent Mark Robillard said rain water that gets into the wastewater lines is unnecessarily treated with chlorine, using village resources on water that it shouldn’t. Some of the system’s smaller lines can’t handle the increased flow either.

As the department prepares for a capital project which, among other things, will install a 24-inch wastewater line on Demars Boulevard, replacing the 12- and 18-inch one that has been there since the late 1950s, it is testing its current lines to snuff out the problem areas which caused the need for replacement. 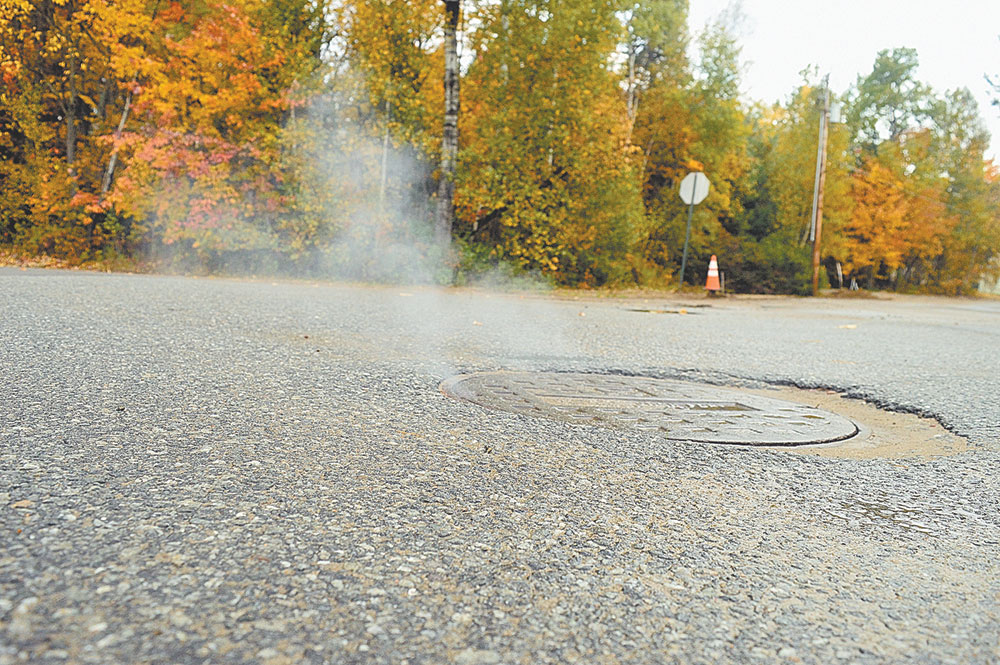 Smoke rises from an uncovered sewage connection pipe in a lawn on state Route 3 as the Tupper Lake village water department tests the lines for cracks and illegal connections. (Enterprise photo — Aaron Cerbone)

Anywhere the smoke gets is somewhere sewer gas can get. Steve Grimm, a New York Rural Water Association wastewater technician, said when homeowners get angry at having their basement fill with smoke he tells them: if they have smoke in their house, they also have toxic and combustible sewer gas in their house.

The testing crew: Robillard, Grimm, as well as Maureen Wegener, a Capital Consultants Architects and Engineering engineer from Lansing Michigan, and C2AE civil engineer and recent college graduate Donald Duprey, started on the corner of 9th Street and Main and worked their way into town block by block.

The large, manhole-sized fan turned the liquid into smoke by heating it up with the muffler. A couple hundred feet down the road, smoke drifted out of a pipe buried in the ground at a spot where there had previously been a trailer parked. The connection was uncapped, meaning the four inch pipe was directly funneling rain water into the sewers.

Several minutes later, a fire truck and several emergency vehicles passed by and stopped by the property, a false alarm.

The village water and sewer improvement project is also replacing three 20-year-old pumps in the pump house building in front of the Kinny Drugs on Demars Boulevard and adding a fourth pump.

The last time the department did this kind of smoke testing was in the 1990s, Robillard said.

Grimm, who does smoke sewer testing all around the state, said that since the New York Rural Water Association is federally funded, the testing was free to the village except for cost of five gallons of liquid smoke.

Another block down, a trailer park with around a dozen units had another problem: there was no smoke coming from the roof stacks that it should have been. The crew determined that there was a sag in the line filled with water that stopped the smoke from reaching that neighborhood.

While walking the neighborhood Grimm noticed that each front yard had a homemade sewer vent made of buried cinder blocks with loose wooden covers. Wegener said lots of water could easily make its way into those pipes.

Grimm said trailer parks are often problematic, because they are private, not municipal. The owners often opt for the cheapest solution, which does not meet the village’s standards for construction.

Robillard said the park sewers get backed up four or five times a year, and that the village brings its vacuum truck to clean it when it does.

“The village goes above and beyond for its residents,” Wegener said.

Robillard said the two day search revealed deteriorating manholes where crumbling mortar was causing inflow, three or four open pipes from a building that had been torn down near the former Wheel Inn — now Hammersong — and a dry trap toilet in the Oval Wood Dish factory.

Robillard said after the search he also decided to work with the village Department of Public Works to install a new pipe on the west end of Pine Street, reaching to the bridge by the village garage next year.

For now, the water department crew will button up the manholes and cover up the open connections.