The pipette and vial used to take a sample of deer blood come in a kit with rubber gloves and a cloth. The kits are for Paul Smith’s College students to research the tick-borne Powassan virus and can be found at Woods and Water or Blue Line Sports in Saranac Lake. (Enterprise photo — Aaron Cerbone) 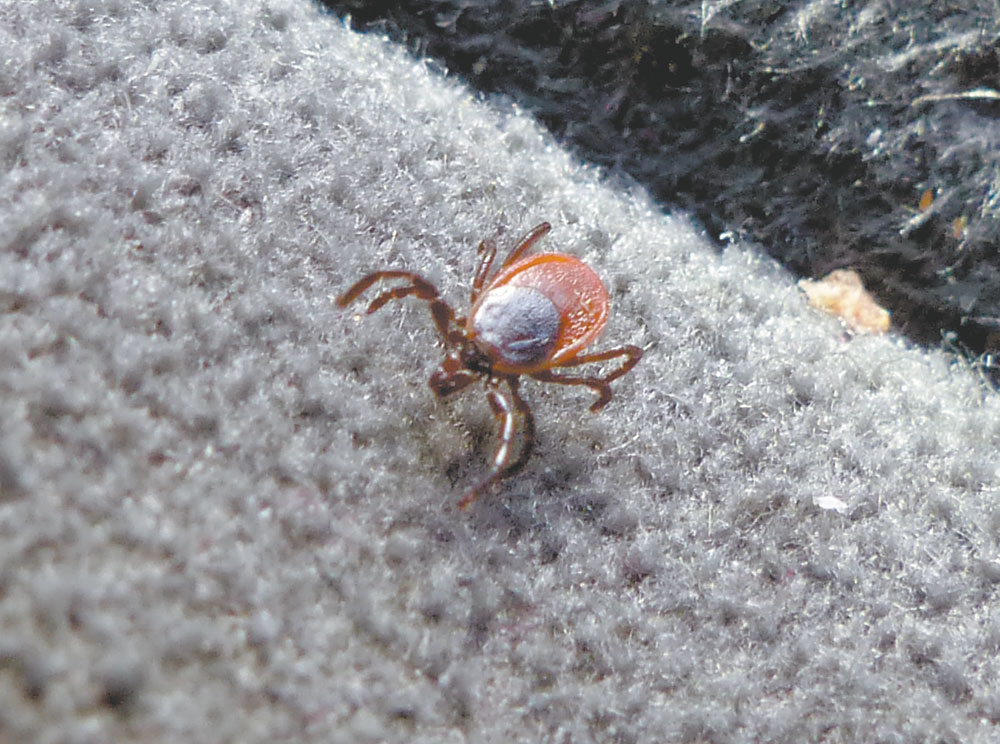 PAUL SMITHS — Seniors at Paul Smith’s College are breaking ground in a research project by tracking a deadly virus biting at the heels of the North Country for the state Department of Health, and they need deer hunters’ help.

The students, led by professor Lee Ann Sporn and funded by the state Senate Task Force on Lyme and other Tick Borne Diseases, are doing research through the Adirondack Watershed Institute on Powassan, a tick-borne virus. They are working with deer processors and hunters from St. Lawrence, Franklin, Essex, Clinton, Washington and Warren Counties to establish where the virus is present — if it is — and where “hot spots” for the ticks carrying it may be.

Deer processors from most counties are volunteering to take a small blood sample from each deer they process, which can be as many as 20 a day. The students need at least 50 samples from each county.

William Tobin said that since the majority of hunters in Franklin County process their own deer, they are providing kits at Woods and Water and Blue Line Sports, outdoors stores in Saranac Lake. The kits have everything needed to take a small sample of blood, around half a teaspoon, and put it in a vial. All hunters need to do is supply the deer and include where it was harvested.

Each store has a fridge where the samples can be kept until the students come to pick them up. 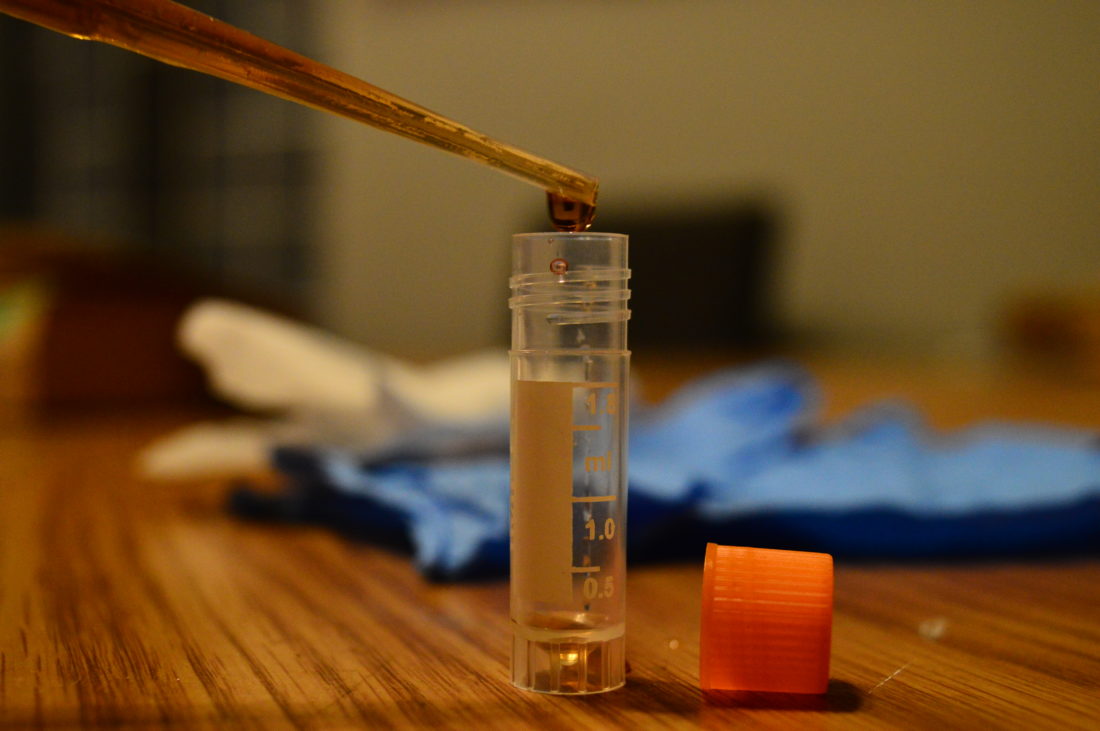 The pipette and vial used to take a sample of deer blood come in a kit with rubber gloves and a cloth. The kits are for Paul Smith’s College students to research the tick-borne Powassan virus and can be found at Woods and Water or Blue Line Sports in Saranac Lake. (Enterprise photo — Aaron Cerbone)

The students also said they hope to reach a lot of hunters because they are likely to be bitten by ticks, and should know the new dangers Powassan poses.

These students are the first and only researchers of Powassan in the North Country. The topic of the senior project class is picked by Sporn and in past years has focused on studying the percentage of ticks carrying Lyme disease.

Sporn said if you are bit by a tick it is safe to assume it is infected with Lyme. Because Powassan is not nearly as common, researching it is different than researching Lyme.

Usually, when studying Lyme, ticks are collected by dragging cloths on the ground to collect individual ticks, but Tobin said they would have to essentially liquefy the ticks and test them all together.

Instead, they are using deer blood as a “sentinel,” as Lillian Meunier referred to it. Deer can be bit by thousands of ticks over their lifetime and once one with Powassan bites a deer it creates antibodies in its blood which last the rest of its life. 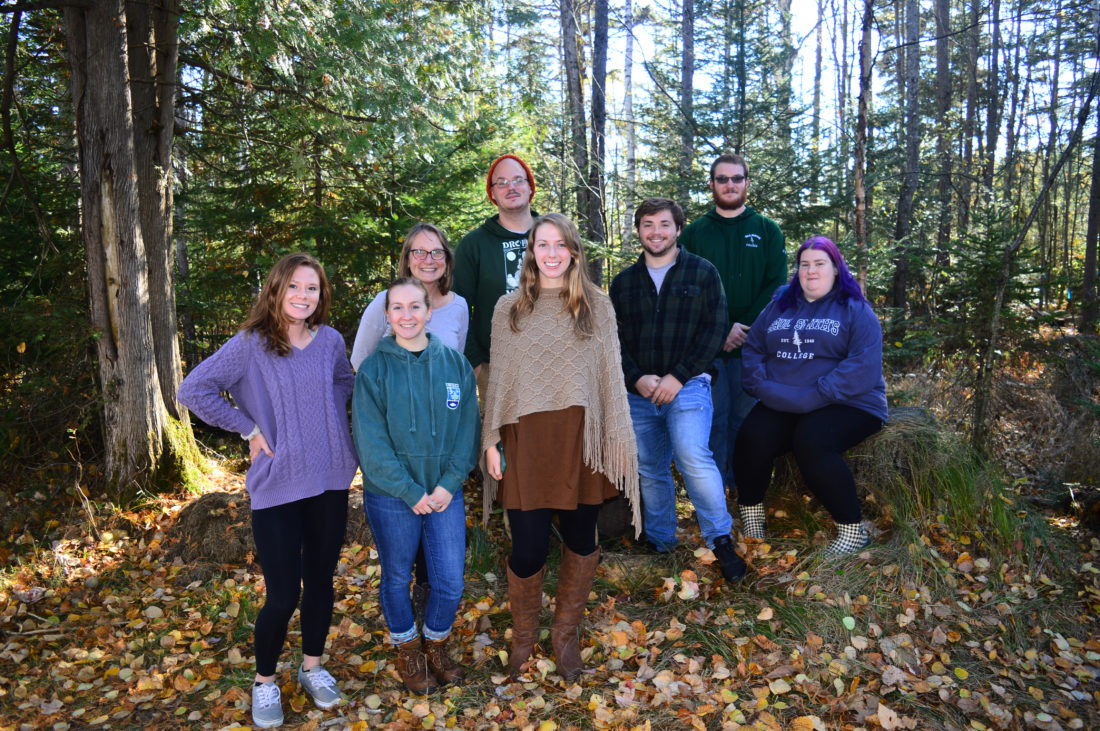 “So that means if any of these blood samples test positive, there was a tick in this area [carrying Powassan] at some point,” Raymond said.

Sporn said the samples will be tested and researched at the Vector Ecology lab, Bureau of Communicable Disease Control and the Arbovirus Research lab, Wadsworth Center and state DOH.

The project is funded through the state Senate Task Force on Lyme and other Tick Borne Diseases, with funds secured by state Sen. Betty Little. Sporn said the project received $25,000 last year for studying Lyme disease and $30,000 this year for staff time, transportation, material.

Last year, there were three Powassan cases in Saratoga County, one of them fatal. Powassan was found in 22 of the 2,700 ticks — less than 1 percent — collected in Saratoga County last summer, according to state Health Commissioner Howard Zucker.

Sporn said the project is designed to determine the northern edge of the virus, which can be carried by the blacklegged tick, the most common variety in the Adirondacks, and the woodchuck tick, which rarely bites humans.

“We know that there’s reason to believe that it probably is here in low levels,” Sporn said.

A couple years ago she said several samples from red and gray squirrels taken from a local squirrel derby tested positive for Powassan.

Though not everyone infected with Powassan gets sick from it, the ones that do can develop a serious brain infection, for which there is no vaccine or antibodies. Powassan has a 10 percent mortality rate, mimics dengue and can be misdiagnosed as the flu. Those that recover from it can often have neurological damage.

Powassan is also more dangerous because unlike Lyme disease, which has a 24-hour “grace period,” the transfer of Powassan from a tick to a human can take as little as 15 minutes. That means that while it is usually suggested to check for ticks at the end of a day, it is recommended to check every half hour if in an area where Powassan is present.

Sporn recommends using more repellents in areas with known Powassan-carrying ticks, wearing light colors, tucking in clothes, including long socks and putting clothes in the dryer at the end of the day to kill ticks with heat.

She said that this time of year ticks will be out as long as the weather is above 40 degrees, hanging out at the edge of dense forests at around waist height.

Research Sporn has done in recent months shows that the Adirondacks are an emergent area for ticks, with them living at higher elevations and further north than ever before. The highest elevation they have recorded them at is at around 1,800 feet in Tupper Lake.

Ticks are found more in areas with deciduous trees than coniferous trees, and the reforestation of much of the Adirondack Park causes good habitats for ticks.

Right now, for the students, it is a waiting game. Rifle and muzzle-loader seasons opened recently and they are waiting for the samples to start rolling in.

There is no previous modeling for the area, and with ticks spreading north and into higher elevations they are laying the foundation for tick research in the Adirondacks for years to come.

“We hope this is the start of future research too, so that even after we leave we hope that either more students here or the DOH can further our research and do more of an in depth study,” Anna Mehner said.