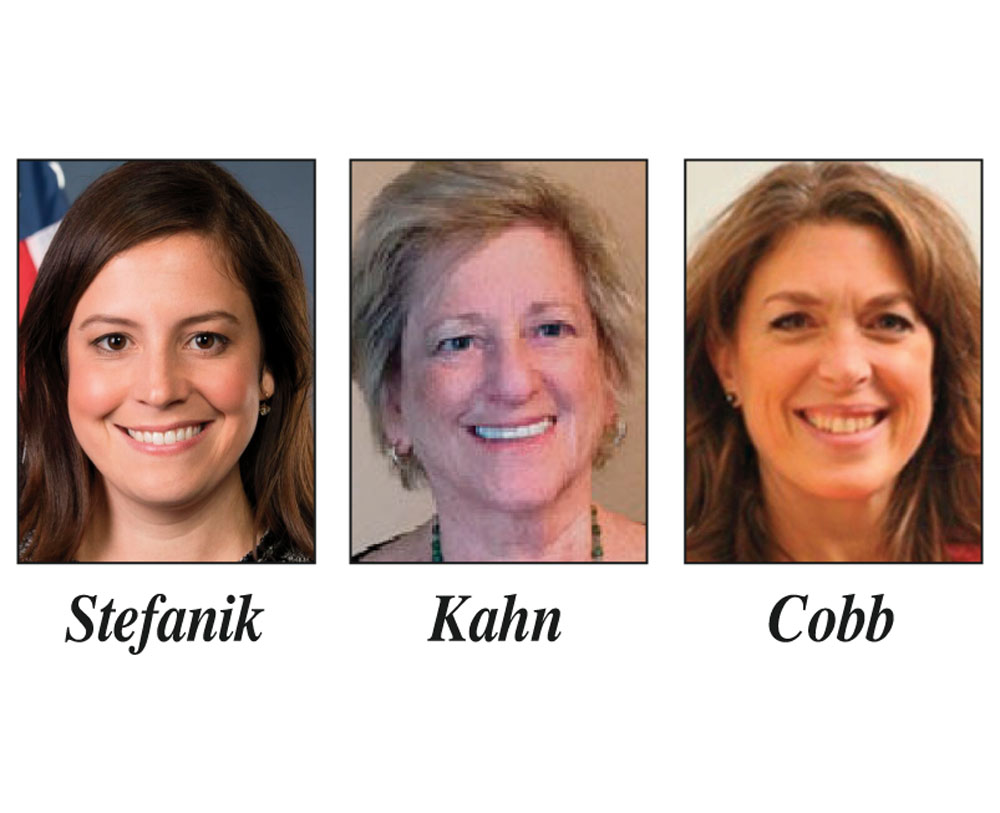 The Patient Right to Know Drug Prices Act banned the so-called “pharmacy gag clause,” which prohibited pharmacists from informing customers about whether it would be less expensive go through health insurance or paying out-of-pocket for a medication. The Know the Lowest Price Act would also prohibit Medicare Part D plans from restricting pharmacists from detailing the prices for certain drugs.

Stefanik, R-Willsboro, had voted in favor of both bills.

Kahn offers Medicare for All fixes

Lynn Kahn, the Green Party candidate in NY-21, last week released her proposed ideas on how to amend the current Medicare for All bill in Congress to lower prescription drug prices, allow for use of medical marijuana and clarify that family counseling and other domestic issues could be included in the range of mental health services.

Kahn proposes to cap out-of-pocket prescription drug costs, allow for quicker marketing of generic alternatives, make it easier to import generic drugs, allow drug patents to be broken in the interest of national security and create a NASA-type agency for government development of medicines, according to a news release.

Among her other proposed amendments are to clarify that covered mental health services can include family reunification, family counseling and assistance for victims of domestic violence, according to her policy paper. In addition, Kahn wants to add a provision to use $60 billion of money recovered from health care fraud to be used toward this program.

Stephanie Schriock, president of Emily’s List, said Cobb will stand up for North Country working families to fight for quality, affordable health care and work on bipartisan solutions to address the opioid epidemic. She also has experience as a small business owner and elected official.

“Tedra is running against Rep. Stefanik, who has consistently voted for policies that would hurt women and families in the 21st District. In addition to supporting Republican attempts to take away health care from millions of Americans, Elise has also supported efforts to defund Planned Parenthood and has voted to undermine equal pay protections for women,” Schriock said in a news release.

Emily’s List was founded in 1985 and raised over $500 million to support pro-choice Democratic women candidates, according to a news release.

DiNapoli, who has been comptroller since 2007, said Cobb is committed “to a more ethical, transparent and productive form of governance.”

Cobb also received the endorsement of the American Federation of Government Employees, which is the largest union that represents federal workers. More than 11,700 active and retired employees live in the district.

Stefanik has received the endorsement of 60 elected officials across Washington County including Board of Supervisors Chairman Robert Henke.

“I think she has taken a great approach to craft policy that has benefited all of her constituents,” he said in a news release. “Elise has dedicated herself to listen to and work with our communities to see what issues are affecting us. She has put in the time and effort to understand our problems so she can take our concerns directly to Washington, D.C., and fight for solutions.”

Stefanik has sponsored legislation to put bipartisan bills in Congress on the fast track for approvals.

House Resolution 1090, also known as the “Break the Gridlock” resolution, would change some House rules, such as bypassing the speaker of the House and allowing legislation to be brought to the floor through a petition of one-third of the members and two-thirds of the entire body. Also, it would require that party ratios on committees reflect the makeup of the entire House and speed up the process for any bills that have two-thirds of the members as co-sponsors or a majority of the members of each party, according to a fact sheet.

Stefanik touted in a news release her record of building consensus, which led to the Lugar Center recognizing her as one of the most bipartisan members of Congress.

The NY-21 Congressional District seat was mentioned as a sleeper pickup for Democrats by a prognosticator from Nate Silver’s FiveThirtyEight website.

Elections analyst Nathaniel Rakich said it was a “weird district,” which voted for President Barack Obama by 6 points in 2012, but swung toward Trump. However, it actually is “bluer” in makeup than the NY-22 seat held by Republican incumbent U.S. Rep. Claudia Tenney, of New Hartford, in Oneida County, which is rated as “lean Democratic” in their model, according to a transcript of the chat on the website.

Elections analyst Geoffrey Skelley agreed that the Democrats’ best chances to pick up seats are in the suburbs.

“But they almost certainly have to win a few districts that are substantially rural, and many of those districts were places where Trump improved markedly on Mitt Romney’s vote support. The New York 21st is that sort of place, although Democrats probably have better rural/rural-ish targets,” he said in the transcript.

Cobb on Monday criticized Stefanik for her failure to stand up against the Trump administration’s rollback of environmental regulations, such as the Clean Water Rule and the Clean Power Plan. Cobb said in a news release that Stefanik did not support a resolution calling for the resignation of then-Environmental Protection Agency Administrator Scott Pruitt. Pruitt subsequently resigned following an ethics scandal.

This comes on the heels of a news release that the Cobb campaign sent out last week criticizing Stefanik for her vote to repeal the Affordable Care Act, which Cobb said would have caused 28,400 non-elderly residents, and another 13,600 who were added through Medicaid expansion, to lose health care coverage.

In response, the Stefanik campaign reiterated the congresswoman’s work to repeal the medical device tax and the auto enrollment mandate, which required employers with more than 200 full-time workers to automatically enroll new employees to an employer-sponsored plan.

She also has helped secure funding for community health centers and the reauthorization of the Children’s Health Insurance Program.

On the environment, the campaign touted that Stefanik was one of the first Republicans to call for Pruitt’s resignation. Stefanik also cited her endorsement by the Environmental Defense Fund and her fight to increase funding for acid rain research.

Cobb will be talking about environmental issues on Oct. 26 in North Creek. The event will take place from 3 to 4:30 p.m. at the Tannery Pond Community Center.

Cobb and Kahn will be attending a forum at 7 p.m. Thursday at Lake George Junior-Senior High School. Stefanik is not attending this event.