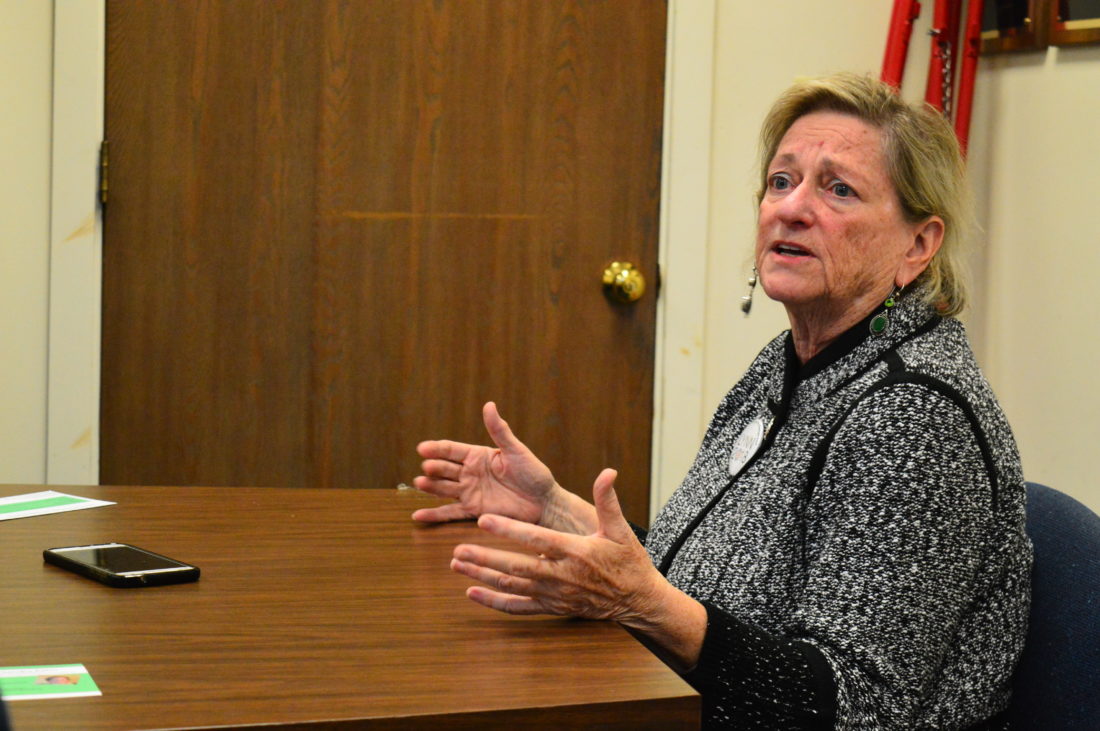 Still, things are a bit cloudy when she is approaching political issues at 30,000 feet. Kahn starts talking about problems within the government by focusing on the big picture. But once she gets through the clouds and starts talking about solutions, things clear up and her ideas become more vivid. She recites statistics from memory, talks about the personal experiences of people she has talked to and explains why agencies don’t produce results.

She said she has honed her message over the course of her long campaign, becoming more focused on putting out concise, specific positions and “roadmaps.”

“One thing I’ve learned is a difference between the marching, angry activists and people who actually know how to look inside government and figure out what exactly to do,” Kahn said.

While she used to translate 10,000-page manuals into plain language for the IRS as a organizational psychologist, she now turns complicated political policy into a list of clear solutions.

While the Green Party traditionally proposes solutions through government programs and federal expansion of power, Kahn, who describes herself as “a very independent Green,” said 22 percent of all federal government programs have no results, according to a President Barack Obama-era White House report. She wants to cut programs, not people, and said she wants to sit on the Oversight and Government Reform Committee.

“How about a ‘Survivor’ for feds?” Kahn said. “You justify why you should keep your budget if your program has no results.”

A Green Party candidate who says she does not strictly adhere to Green Party thinking, Kahn takes ideology and policies from many other political parties. If elected, she said she would meld Democratic universal health care with Republican constituent-services staffers and a Libertarian drive to limit what she described as the overreach of the federal government.

Instead of turning her back on Green Party values, Kahn sees herself as broadening the Green Party, embracing many of its values while listening to the needs of district residents despite party politics, something she said the two main parties have not been able to do.

“I don’t think the Republicans and Democrats can get past hating each other; I just don’t,” Kahn said. “It isn’t just that people are angry — which they are … there’s a lot of despair out there. People are, like, giving up in a way. They’re tired of the fighting. They believe the two-party system is broken, and they don’t see a way out, and they’re delighted to hear that there’s a third party and a third choice.”

She is intent on hearing from people suffering from “invisible” issues such as veteran suicide, the plight of modern dairy farmers and children suffering in what she called a broken foster care system.

Kahn became briefly overwhelmed with emotion when discussing the national average of 20 to 22 veterans who commit suicide every day, including those who were not offered adequate help.

Kahn said the clear problem with how the Department of Veterans Affairs deals with veteran suicide lies in how it measures success. The department does not measure success by if the suicide rate goes down. It measures success by the number of views on PSAs about suicide.

She said the most effective antidote for a high suicide rate is veteran-to-veteran contact. She would like to fund a network of VA peer-to-peer programs, giving veterans an understanding confidant to talk with when in times of high stress. Kahn also wants a VA hospital in the district, likely near Fort Drum.

Kahn has narrowed her policy on health care down to eight bullet points. She said she supports the Expanded & Improved Medicare For All Act, which has been introduced to the House, but only with eight caveats, clarifying the purpose of the legislation.

Kahn said fixing the health care system starts with reducing the cost of medication, and she supports Republican proposals to do that. She advocates for what is called a “march in,” made possible by the Bayh-Dole Act.

“We the taxpayers paid for most basic research for most of the medications released to the market in the last bunch of years,” Kahn said. “There are pieces of laws that allow us to … have the agency to march in and say, ‘You’re not making this medication available enough or cheap enough. … It’s a matter of national urgency, and we’re going to move that license or that patent to somebody else who will do that.'”

Kahn said, if elected, she would like to hire some of incumbent U.S. Rep. Elise Stefanik’s staff, who she said are doing a good job.

When asked for an example, Kahn said that Stefanik helps individual veterans navigate the bureaucracy of applying for benefits but has not renovated the system so they don’t need her help so much. She wonders why VA benefits is something veterans have to go through an approval process for.

“These are people who joined the military; they served us,” Kahn said. “Why don’t we just [say] ‘You’re in unless you’re out’?”

She said veterans are still appealing the denial of benefits for those exposed to Agent Orange in the Vietnam War. Many of these people were in the Navy, so they were not “on the ground” but were still exposed to the chemical.

Another invisible group Kahn said she wants to represent is dairy farmers, who she said were left out in the latest revamping of the trade deal between the U.S., Canada and Mexico.

“It does nothing to help our dairy farmers,” Kahn said. “There’s nothing in there about a fair price for milk. These are deals for corporate farmers.”

Dairy farmers, like veterans, are facing a suicide crisis, too, brought on by a rash of generational farmers going bankrupt. Kahn said one of the largest dairy co-ops in New England sent out suicide prevention hotlines to farmers and that Lewis County has the second-highest suicide rate in state.

As New York’s 21st Congressional District makes its final approach to the Nov. 6 election, Kahn is focused on the invisible, hoping to bring their problems to light.