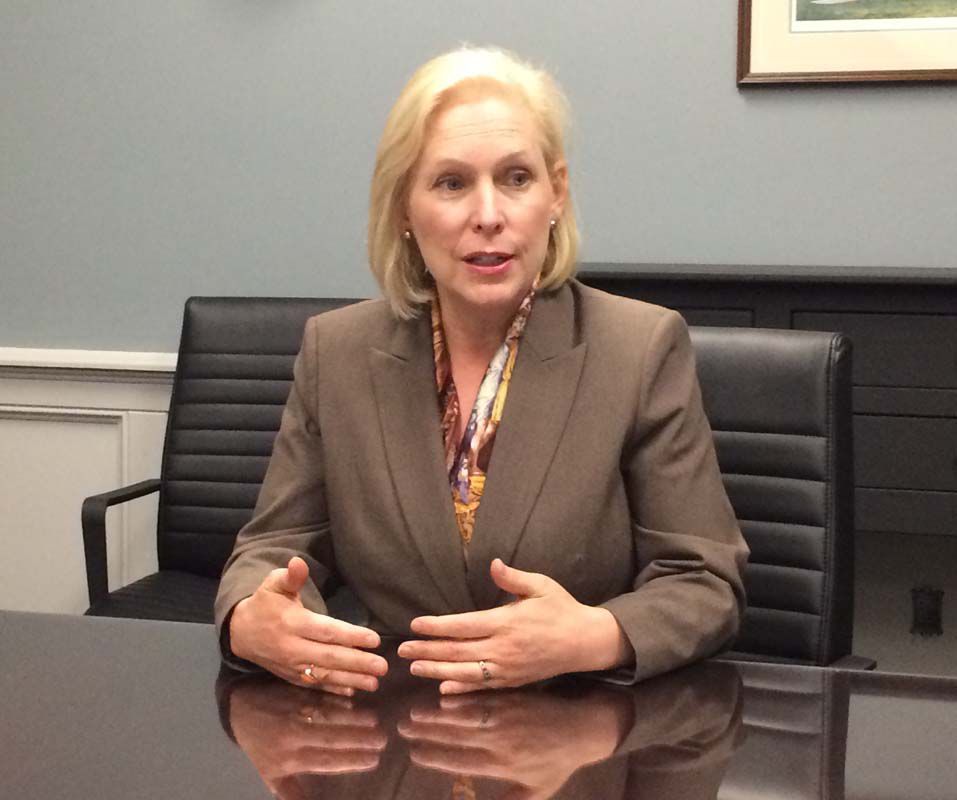 U.S. Sen. Kirsten Gillibrand, D-N.Y., speaks about campaign finance reform, health care and other issues during a meeting in September 2018 with the Post-Star editorial board. (Photo — Michael Goot, The Post-Star)

WATERTOWN — For the second time this year, U.S. Sen. Kirsten Gillibrand visited the city on Monday to talk about Health care reform.

At the North Country Family Health Center, Gillibrand, D-N.Y., spoke about a bill she is co-sponsoring to make health care more affordable.

“Health care costs in Watertown are high, and for a lot of people without a health care center like this, they can’t afford it,” she said.

This provision allows states to institute inexpensive health care for residents who make between 133 and 200 percent of the federal poverty level and are not covered by other program. The federal government covers 95 percent of the cost the state would have paid if members of the program had they enrolled in the Marketplace. At the moment, only New York and Minnesota have a basic health program.

“No matter where I travel in the state the number-one thing I hear is over and over again how expensive health care is,” Gillibrand said. “I think it’s a basic right and it’s something we have to fight for.”

Her proposal would increase coverage by doubling the income cap from 200 to 400 percent of the federal poverty level.

“We have a bill, a really good piece of legislation I’m hoping will become bipartisan, and it will expand the basic health program to cover more low income workers,” she said. “Instead of covering up to about $24,000 a year it will cover up to about $48,000 a year.”

Gillibrand also hopes that the bill will increase the number of states who set up these plans by allowing states to spend federal Health care funding on set up costs. To her mind, it is an important way to save several hundred dollars for low income working families.

“In 2018 the average premium for a qualified health plan in New York State was $568 a month,” she said. “For people with incomes up to 400 percent of the federal poverty line, the average monthly subsidy would be $276, leaving them with a monthly premium that would be around $270.”

The New York State Assembly has passed the New York Health Act, which would look at how to set up a single payer, “Medicare for all” system within the state. If Democrats can reclaim the State Senate in the November election, it might be passed into law. Gillibrand said that her changes to the Basic Health Program, however, would help New York whether or not it institutes universal coverage.

“I don’t think the state intends to pay for everything, so those Medicare dollars, those Medicaid dollars would still be coupled with whatever the state does,” Gillibrand said. “So if I can get permission to have federal coverage up to 400 percent of the poverty line, that means the state only has to cover the additional coverage that’s not covered under the federal guideline.”

Around 740,000 New Yorkers are currently eligible for the basic health program. Gillbrand said under the proposal, 400,000 more people would be eligible. According to her office, this would include about 270,000 who are uninsured and 150,000 who are buying a qualified Health care plan with subsidies.

Gillibrand estimates that the cost to the federal government would roughly double under the proposal, from $3.8 billion to $7.6 billion.

Currently the legislation is sponsored by Maria Cantwell, D-Wash., and co-sponsored by Sens. Gillibrand, Charles Schumer, D-N.Y., and Debbie Stabenow, D-Mich., but Gillibrand hopes it will gain bipartisan support.

“Further efforts to make health care affordable for our patients and more accessible will insure they stay out of the emergency room, they get the care, the vaccination, the routine checkups they need,” Horton said. “On behalf of our patients, thank you very much for your work.”

The Family Health Center receives about $1.6 million annually in federal funding and just-finished renovations, assisted by a $1 million federal grant. Gillibrand toured the new facility and met with health care providers before her presentation.

Jenne said that the expansion, if passed, would particularly help residents in northern New York.

“This program really targets what we need here in the North Country, our working poor who are out there, day in and day out, trying to provide a better life for their families,” she said.

Referring to the monthly savings under the proposed program, Jenne said it could significantly help local families.

Gillibrand also addressed the rescheduling of her debate with her Republican opponent, Chele Farley, to Thursday this week after the senator pulled out of a debate on Spectrum that was scheduled for Sunday.

“I was very disappointed we couldn’t participate in the debate on Sunday, and the only reason we had to walk away as there was a planned picket line,” Gillibrand said. “Unfortunately charter communications has been in a labor dispute for over a year, and those labor negotiations broke down about a week ago. Because I stand with workers and I have no intention of crossing the picket line, I had to withdraw.”

Gillibrand said the debate on ABC would only be half an hour.

“They only offered us 30 minutes; we asked for a full hour,” she said.

ABC could not be reached for confirmation of this on Monday afternoon.