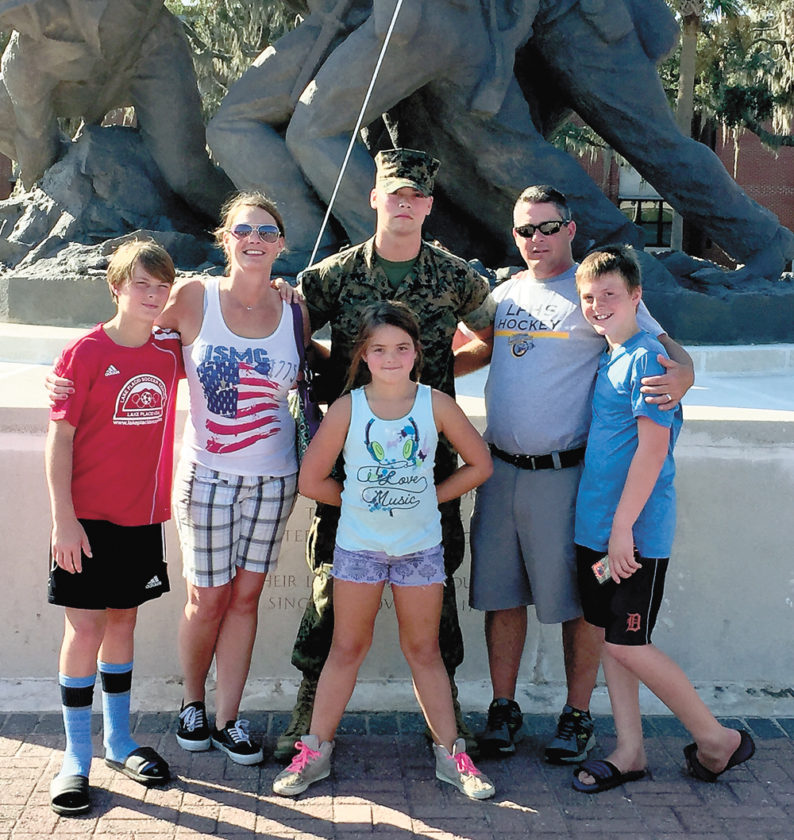 LAKE PLACID — Amanda Cassidy marched up the stairs of her home in a pair of tan issued combat boots her son brought home.

They were actually for his stepdad, but Amanda and her husband Seann happen to have to same shoe size. At the top of the stairs, posted on the wall, are a slew of words and phrases relating to the United States Marine Corps — Compassion, America, Strength, Respect, Semper Fi. The rest of her home is decked out in Marine nostalgia and memorabilia such as a grenade, a Bible issued to U.S. troops in Operation Desert Storm in 1990 and 1991 in Iraq, and a clay recreation of the flag raising at Iwo Jima. Even the red walls and wood panel windows seem to mimic the scarlet and gold of the Marines’ banner.

Dress photos of her husband and her son Noah Mohr hang in the living room, along with a collection of patches and medals Seann earned when he was on active duty in the 1990s.

“It’s not the full dress uniform,” she said. “It’s actually like a dickey, which is kind of funny.”

Mohr graduated from Lake Placid High School in 2016. He was a year-round athlete, participating in soccer, hockey and baseball. In his junior year, he enlisted in the Marine Corps. Family and friends weren’t too surprised with his decision. He said it was a natural path for him, but also the reasoning is never definitive. 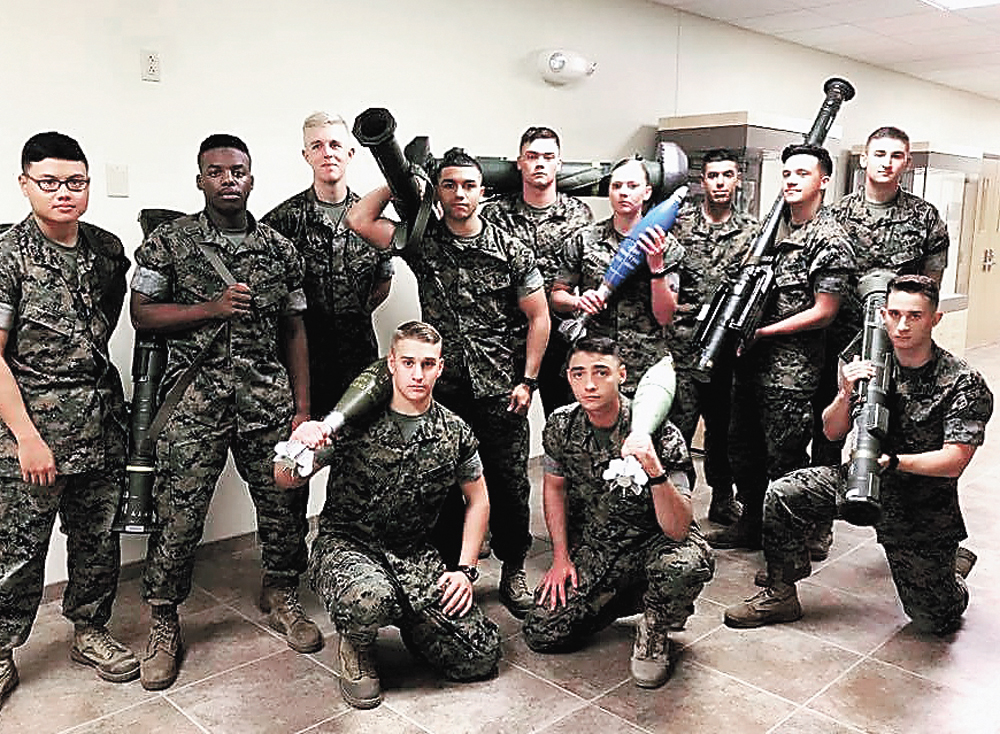 Mohr and his fellow ammunition technicians pose for a photo with different weapons in hand. Mohr is in the back holding the Javelin rocket launcher. (Photo provided)

“[Marines] ask each other that question all the time — ‘Why’d you join?,'” Mohr said. “There’s never really a clear or concise answer. There’s different influences throughout our lives. My stepdad served in Operation Desert Storm. Growing up, I saw a lot of pictures of him during that time around the house. He was an influence, but he never pushed me into it.

“I really thought it’d be an interesting decision — doing things not many people do, and seeing a different part of the world that I probably wouldn’t have.”

Cassidy said she was happy to have a child in the service.

“It’s the most wonderful thing,” she said. “I’m so incredibly proud of him everywhere I go. I’m a waitress by profession, and I’ll have my black checkbook with stickers on them that say ‘Proud parent of a U.S. Marine.’ I’d say 95 percent of the people say, ‘Thank you for your son’s service,’ or they’ll strike up a conversation about when they’ve served. I’ve got the sticker on my car. We’ve got the flag flying in the front yard. I’m incredibly proud.”

Mohr is currently stationed overseas in Okinawa, Japan, a 13-hour time difference from New York. Prior to Okinawa, he was stationed at Camp Fuji in Gotemba, Japan, for six months. Mohr said it reminded him a lot of home. 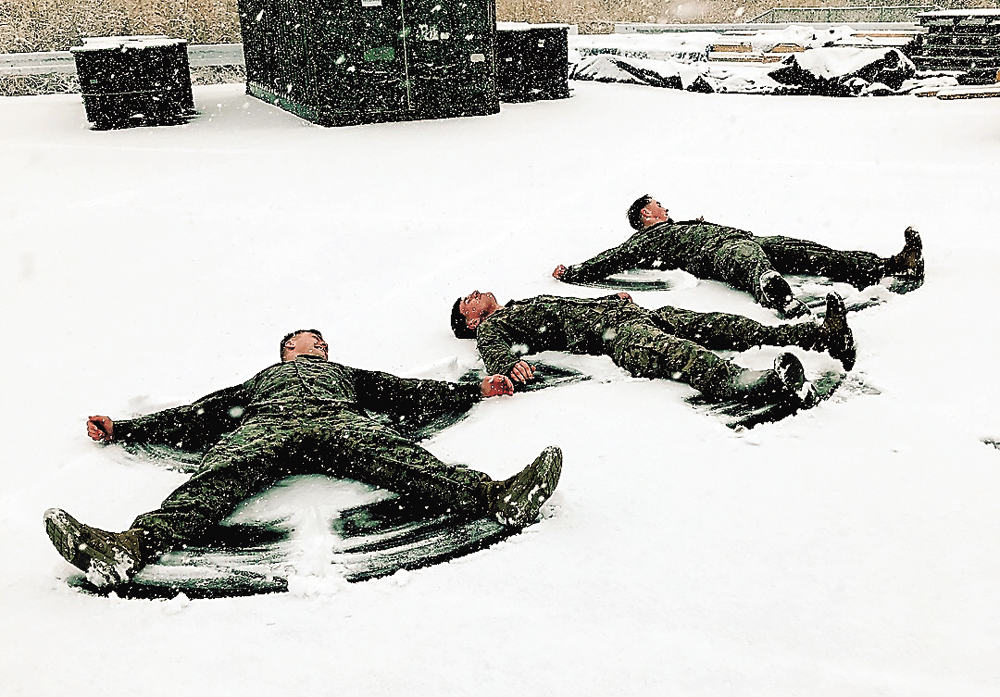 “It resembled the Adirondack mountains in a way,” he said. “Mount Fuji is big and flat at the top, but then it’s surrounded by these other mountain ranges. It also snowed on us while we were there, so it felt a lot like upstate New York.”

A typical day for Mohr starts at around 5:30 a.m. He and his fellow Marines wake up for physical training.

“It could be anything from a run to this Crossfit-like program we do,” he said. “Yesterday we played dodgeball. As long as you’re able to run at a decent pace for a decent amount of time, you’re fine when it comes to the physical demands of being a Marine. Any high school athlete should be good, and if you’re not, they’ll get you there.”

“We store and help transport any ammo that training units might need,” he said. “So if a group is training for something like jungle warfare, we’re the ones who provide the equipment.

“Picture it like a warehouse or a Walmart of sorts,” he continued. “I process all the requests and make sure whoever is supposed to pick up equipment actually does. I’ll also help move it on to their vehicles. It’s a lot of accountability and paperwork.”

Outside of that, Mohr is also a rifle and pistol coach. He said this is one of his favorite aspects of military life because he loves teaching people.

“Through high school, I never really thought of myself as a teacher,” he said. “That, to me, is one of my big things now. If I can teach someone how to perform a skill better, that is a success. And it’s not just skills; I love talking to my Marines and showing them how to be better people in general.”

The Marines get a two-hour lunch break and then work again until about 4:30 p.m. After that, Mohr said people are free to do what they like.

“Some guys live in the gym, and others like to explore the island,” he said. “Every weekend me and few of my friends will take a bus into town — they’ve got a great bus system in Okinawa — and we’ll take in the Japanese culture. We try to eat at different restaurant every time.

In the past few years, the political climate in America has gotten more divisive. When asked if that’s a topic of discussion among Marines, Mohr didn’t want to comment too much.

“We’re not really allowed to talk about those things,” he said. “We just do what we need to do, especially being way over here, we let all that stuff be.”

As far as the positives and negatives of military life, Mohr said people are probably the best and worst part about it. You gain a lot of new friends and loved ones, but you’re also far away from the old ones.

“I’ve made some of my best friends in the past two years,” he said, “but the distance can be challenging. There are some kids that I went to high school with whom I’ve lost contact.

Seann said the friendships people make in the military can last a lifetime.

“You can not see people for 10 years, and start up a conversation like you saw each other just yesterday,” he said.

Mohr and his parents are thankful for things such as email and Facetime.

“I talk to my parents about once a week, typically on the weekends. The time difference plays a factor. Being overseas isn’t really the thing because I could be back in the States but still be stationed far from home.”

Before they get stationed, Marines have to endure 13 weeks of basic training. Mohr’s was at Parris Island, South Carolina. Cassidy said the time away from her son was tough.

“Boot camp nearly killed me,” she said. “Thirteen weeks of not being able to see my son who I woke up every morning and saw go to bed — every time he goes up the stairs his ankles crack. You know how it’s just those little things.”

During boot camp, Mohr scored the highest on a shooting range test. This awarded him a two-minute phone call to his mother.

“It was absolutely the most wonderful thing,” Cassidy said. “Just to hear him say, ‘Hi, Mom.'”

There’s a strong mental and emotional condition that comes with being a Marine, Mohr said.

“The first phase of our 13-week basic training put us in the mindset of military lifestyle,” he said. “There’s also a high standard you need to hold yourself to. You have to carry yourself differently than a normal person would because you’re not just representing yourself. You’re representing the entire branch.”

“Guys go into boot camp and when they come out three months later, they’ve turned into men,” he said.

Cassidy herself originally wanted to join the military and be a nurse. Her mother, however, wouldn’t allow it.

“She said, ‘Our family doesn’t do the military,'” Cassidy said.

The way Cassidy’s home looks and operates now would beg to differ.

Veterans Day in their household is normally a movie marathon.

“Things like ‘Hacksaw Ridge’ and ‘Band of Brothers,'” she said. “It’s basically that all day.”

Cassidy said she and her entire family have the utmost respect for the military and their country.

“Even when we’re just watching a football game or a baseball game on the TV and they do the national anthem, it goes completely silent in our living room, and my husband will stand.”

In a downstairs bedroom, Cassidy hung a letter from Mohr along with his dog tags. He doesn’t have the neatest handwriting, but Cassidy said it reminds her of when Mohr was younger. On the back of the letter is a tracing of his hand with the words “Hold my hand” written on the palm.

“That’s a little thing we do,” she said. “We put our hands together and say that.”