A massive pile of stone at the former NL Industries mine in Tahawus, which a contractor wants to remove from the site for use in construction projects. (Provided photo)

A stretch of rail in Tahawus, part of a rail line the state wants declare “abandoned,” is seen. Local government, a business owner and transportation company are contesting the effort. (Photo provided) 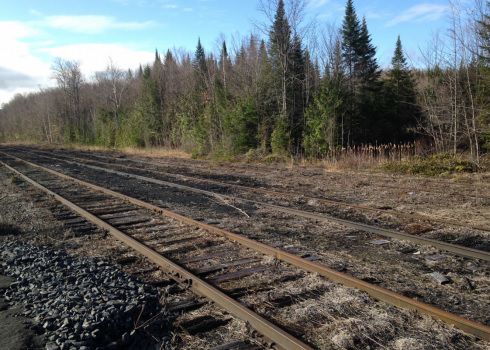 A stretch of rail in Tahawus, part of a rail line the state wants declare "abandoned," is seen. Local government, a business owner and transportation company are contesting the effort. (Photo provided)

A Tupper Lake business owner, the town of Newcomb, Essex County and a local resident have all taken steps to intervene in New York’s effort to have the federal government declare abandoned a stretch of railroad tracks in Warren and Essex counties.

The Essex County Board of Supervisors on Monday voted to ask the state Department of Environmental Conservation to back off its application before the U.S. Surface Transportation Board.

While the DEC has stated its sole goal is to have the rails removed from custody of the line’s owner, Iowa Pacific Holdings LLC, some are concerned that language in the state applications about conversion of rails to a trail could result in the line being shuttered, and could affect stretches of rail line to the south owned by Warren County and the town of Corinth. Iowa Pacific operated Saratoga & North Creek Railway for more than six years before halting operations this spring.

The town of Newcomb filed a letter with the Surface Transportation Board on Sept. 17. Town Supervisor Robin DeLoria wrote that the state did not seem to have met the standard for the line to be deemed “abandoned,” as discussions are ongoing for a new operator to buy and use the line.

“In implementing this standard, the STB must balance the competing benefits and burdens of abandonment or discontinuance on all interested parties, including the railroad, the shippers on the line, the communities involved, and interstate commerce generally,” DeLoria wrote. 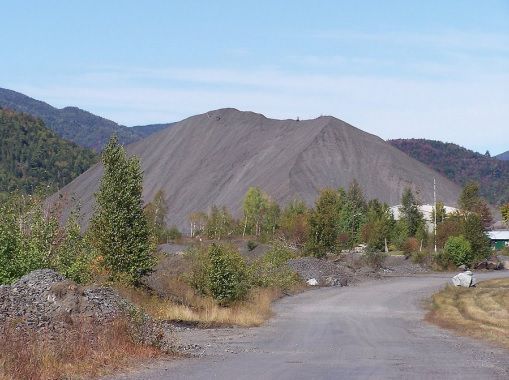 A massive pile of stone at the former NL Industries mine in Tahawus, which a contractor wants to remove from the site for use in construction projects. (Provided photo)

DeLoria said the town was also working “to ensure the storage of tanker cars on the Sanford Lake Branch of the SNCR will not occur in the future, and continue to support finding a viable rail operator to support” plans to remove stone tailings from the former NL Industries mine in Tahawus, the north end of the rail line.

The municipalities are hopeful that Tupper Lake contractor Mitchell Stone Products, under the name of Mountain Endeavors LLC, will remove more stone from the former NL Industries Mine in Tahawus, where millions of tons of stone remain at a former titanium mine.

Omnitrax Holdings Combine, a national transportation company that is under contract to buy the line from Iowa Pacific and wants to transport stone from the site, filed a “notice of intent to participate” on Sept. 21 as part of the abandonment case.

Mitchell Stone Products filed a request Sept. 14 asking the Surface Transportation Board to “deny” the abandonment request. The company says having rail as an option would help it create jobs and lower its carbon footprint by cutting back on trucking.

Company owner Paul Mitchell acknowledged he has been trucking the stone from the mine, but said using rail would be beneficial in a number of ways.

“We are learning more about the potential benefits of rail transportation and believe access to the interstate rail network could expand and accelerate our business,” Mitchell wrote. “With a viable rail transportation option, the market reach for Tahawus products could be expanded well beyond the local truck-served Adirondack area. In addition to direct benefits to Mitchell Stone Products, this could help us increase our local workforce and deliver valuable environmental benefits.”

Also weighing in on the STB case was Elizabethown resident William Kuntz, who filed a letter claiming the “DEC is not the proper party” to pursue the abandonment application.

Warren County owns the rail line from North Creek south to Hadley, and county leaders have not yet taken a formal stand on the abandonment application. The county Board of Supervisors Public Works Committee will meet Friday afternoon and railroad issues are on the agenda.

A number of environmental groups have been pushing to have the railway considered abandoned after Iowa Pacific last year stored dozens of out-of-service tanker cars on the line in Essex County.

Copies of the filings in the case can be found at www.stb.gov/filings/all.nsf/WebFilingDate?openform.