Trustee warns of coyotes in Tupper 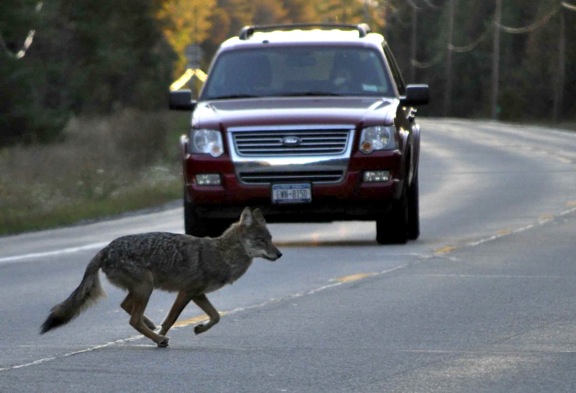 A coyote runs across state Route 3 just outside of Tupper Lake in the Adirondacks on Sept. 20, 2010. (Enterprise photo — Mike Lynch)

TUPPER LAKE — Village Trustee Clint Hollingsworth wants residents and their pets to be wary of the coyote population in the French Village neighborhood.

Several of the small dog-sized canines have been seen around the neighborhood this summer, and Hollingsworth personally had a run-in with one recently.

“My back light was on, I was in my garage working, and it came through and stopped with the light on, so they are not as skittish as you might think,” Hollingsworth said.

He added that the coyote ran away after it saw him. Coyotes do not pose much of a threat to humans but are known to attack dogs and cats in residential areas. Hollingsworth said to keep pets inside at night, when coyotes are most busy, and to keep an eye on them when they are out.

Coyotes adapt to living in suburban environments, according to the state Department of Environmental Conservation. “Human development makes surprisingly good coyote habitat,” the DEC says on its web page about Eastern coyotes.

A study from researchers at the SUNY College of Environmental Science and Forestry estimated there are about 14,500 breeding pairs of coyotes in New York during the summer, with 2.5 pairs per 10 square miles in the Adirondacks.

The majority of reports have come from the French Village, the neighborhood with the loose boundaries of Wawbeek Avenue, Sunset Avenue, Stetson Road and Broad Street. Mary Casagrain, the village clerk, also said she saw one walking near Little Wolf Beach in broad daylight.

Though coyotes are typically known as nocturnal animals, they can be up and around at all hours of the day.

Hollingsworth and village Mayor Paul Maroun suggested that if someone encounters a coyote that they call village police, state police or the DEC.