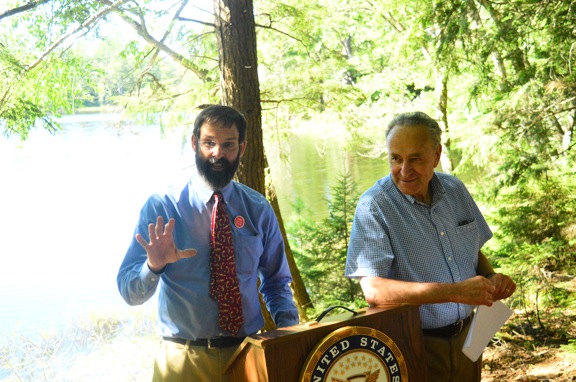 Flying into the Lake Clear airport after touring the Essex Farm earlier in the day, Schumer took a bumpy ride out to an isolated press conference with Adirondack Council Executive Director Willie Janeway on the shore of the once-barren pond, part of the one quarter of Adirondack waterbodies that saw diminished or eliminated fish and bird populations due to acid rain in the 1970s through the 1990s.

Schumer said the wildlife had been “wiped out by selfishness” by coal fire plants that were practically designed to pollute. In 1990, after five years of acid rain damage research on Bear Pond — one of 1,800 Adirondack waterbodies tested — found it had a high pH balance of 6.2, Congress passed amendments to the Clean Air Act to limit cross-state pollution. 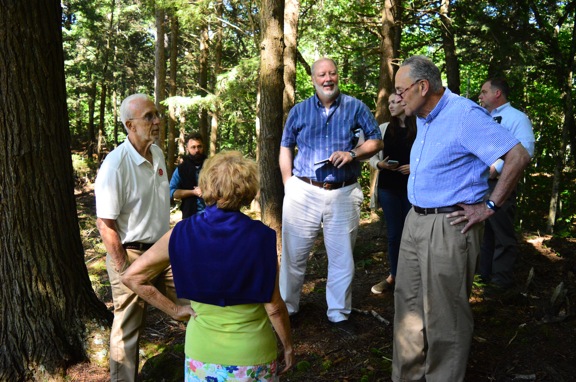 After the CAA’s cap and trade program 28 years ago, fish and wildlife populations began to slowly return to the lakes and streams of the Adirondacks, much to the surprise of environmentalists.

Bear Pond’s pH balance now averages 5.1, which is still high but means that for every 100 molecules of acid that used to pollute the lake, there are now only 10.

As Schumer spoke, members of the crowd stopped listening and craned their necks to see a common loon diving and resurfacing in water to fish, a sign of life for birds and fish.

Schumer said that while some consider environmental regulations on power companies to be anti-economic, he argues that it is pro-economic. Pollution, he said, creates “externalities,” side effects of a company’s production which are paid for by someone else.

While the coal companies to the west save a couple million dollars a year by not turning on their cleaner systems, the tourism and logging industries of the North Country suffer as trout, red spruce and unique biomes are damaged or killed off by acid rain. 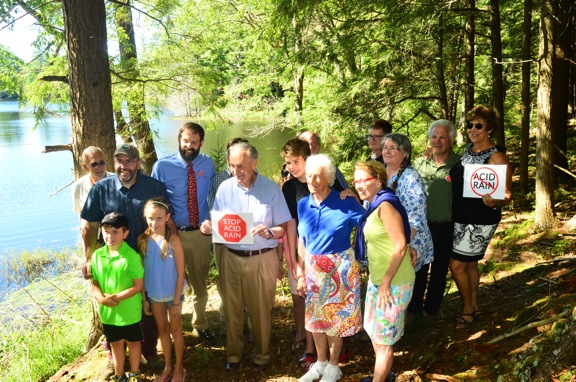 Schumer said that it is the government’s job to sniff out and capture externalities.

He also said it is not a Republican/Democratic issue, pointing out that Republican President Richard Nixon signed many of the first environmental policies into law.

What has changed since then, Schumer said, is that many lawmakers are now in the pocket of coal and other companies that are inconvenienced by environmental regulations.

Schumer said the way to talk past the money and change the way legislators vote is to be vocal and realize that “we all pay a price” when the environment is polluted.

He said citizens have to deny the apathy that may come naturally and talk to lawmakers and voters in other states about how the Adirondacks, which see 12.4 million visitors annually, are hurt by corporations producing acid rain.

Currently, the EPA is also reconsidering rolling back mercury and air toxin standards.

Schumer said in the past two years under former EPA Administrator Scott Pruitt’s rule, he had stopped the leader from firing what he called the “good people” at the agency.

He said Pruitt, nominated by President Donald Trump, was just as corrupt in his policy as he was in his leadership of the agency. He resigned after numerous reports of misuse of funds and other ethics violations.

Pruitt’s replacement, EPA Acting Administrator Andrew Wheeler, is not much different in his politics, Schumer said, and he anticipates more attempts at repealing environmental standards.

Though there have been improvements in acid rain reductions, Schumer said there are still 50 lakes and rivers too polluted to eat from, and the environment is facing its biggest challenge in a long time from the Trump administration.