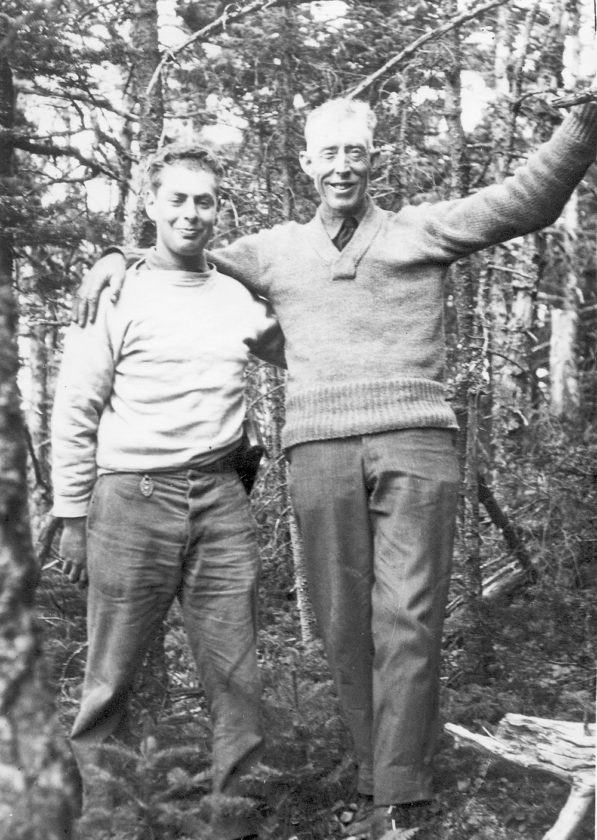 George Marshall, right, smiles with his friend and guide Herbert Clark. Clark is 46er No. 1, while Marshall is No. 2. (Photo provided)

SARANAC LAKE — Doing anything consistently for a century is usually cause for celebration, and with the anniversary of an Aug. 1, 1918, hike just around the corner, the Adirondack 46ers are throwing a party.

On Aug. 1 a hundred years ago, a trio of hikers climbed Whiteface Mountain in Wilmington. Seven years later, Robert and George Marshall and their friend Herbert Clark finished hiking all 46 mountains in the Adirondacks that were surveyed to be more than 4,000 feet in height.

In the intervening century, many hikers have followed in their footsteps, forming a club whose membership requires climbing to the summit of each of the original 46 mountains.

A lot has changed with the club and the Adirondacks in general since 1918, but some things remain the same. 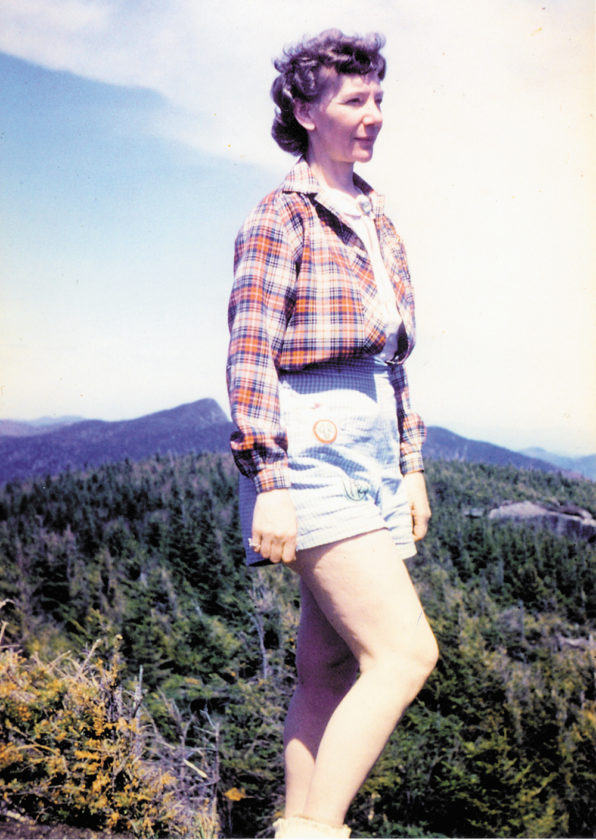 Grace Hudowalski takes in the view from the summit of Phelps Mountain in the High Peaks. (Photo provided)

The 46ers organization didn’t come into existence until 1937, but Bob Marshall published a short book in 1922 through the relatively new Adirondack Mountain Club that detailed the trio’s hikes. At that time, only about a dozen of the High Peaks had trails to the top, while now most of the mountains do — and the state Department of Environmental Conservation has plans to mark trails on the remaining “trail-less” peaks.

“In every mountain section in the country there is a certain elevation, arbitrarily selected, which divides the monarchs of the region from the ordinary mountains,” Marshall wrote. “Here, there are 43 peaks which fall in this category. But, unlike other sections, these peaks are comparatively little known and, with few exceptions, almost never climbed.”

Little did Bob Marshall know the spark that his book would ignite. The 46ers roster of people who have tackled all the High Peaks now sits comfortably above 10,000.

When Verplanck Colvin surveyed the Adirondacks for the state in the late 1800s, his crews found 46 mountains with an elevation of more than 4,000 feet. Since then, modern equipment has found that Colvin was off on a few peaks, but not by much. Although a couple of the High Peaks are actually just shy of the 4,000-foot mark and one non-High Peak is over, the 46ers honor the original survey when granting membership status. 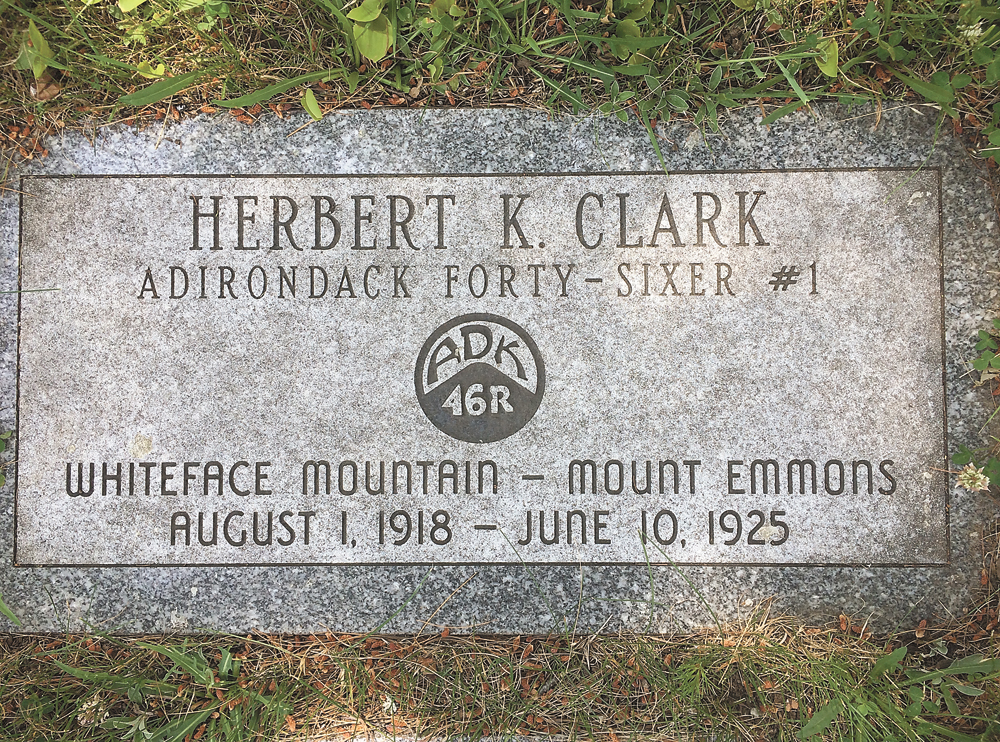 According to the 46ers, Marshall’s book and another published in the late 1920s “caught the attention and imagination of a group of like-minded adventurers in Grace Methodist Church in Troy. The church’s pastor, the Rev. Ernest Ryder [46er No. 7] and two parishioners Edward Hudowalski [No. 6] and his wife Grace [No. 9] led members of Ed’s Sunday school class on hikes of the High Peaks throughout the 1930s and 1940s. Six months after Ed and Rev. Ryder finished the 46 on Dix on Sept. 13, 1936, they formed a hiking club called the Forty-Sixers of Troy. Grace began recording the climbs of each member of the new club and encouraged them to write about their experiences. Thus began a tradition that continues today of climbers writing in to the club to register their climbs.

“The lure of the Adirondack High Peaks spread to hikers throughout the Northeast. In order to include hikers beyond the greater Troy area, it became apparent that the Troy group needed to expand their reach. With the blessing of the Forty-Sixers of Troy, the inaugural meeting of a new club named the Adirondack Forty-Sixers took place at Adirondack Loj on May 30, 1948.”

But as with anything, change has happened.

“The pleasure of standing on a lofty summit where only a few have ever stood before is easy to acquire in the Adirondacks,” Bob Marshall wrote in 1922. “On certain summits, I have never seen any signs of man or heard of anyone being there. Probably some of these had never been climbed before … others … are probably not ascended more than once in five years.

“So far as I know, no one else has ever climbed them all.” 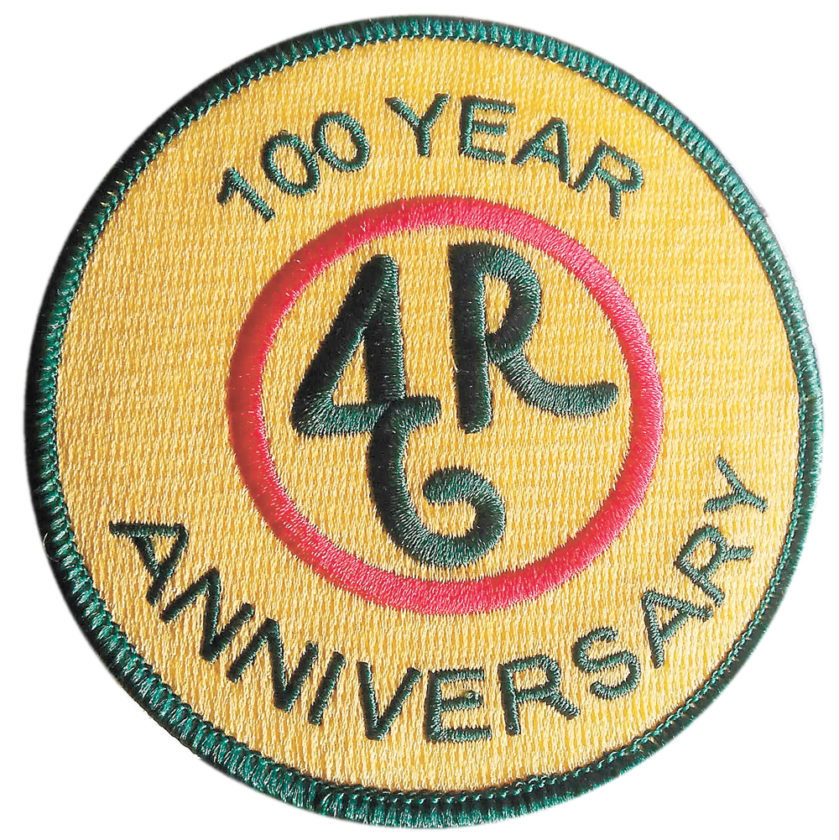 The 46ers released this commemorative patch to honor 100 years of hiking by club members.

Clark became 46er No. 1, while George and Bob follow at numbers 2 and 3. The roster of people who have completed the 46 High Peaks was updated at the end of June this year, with Jenna Mielzynski earning number 10,871 after finishing on Seymour Mountain last October.

Although the 46ers are obviously a group that encourages hiking, they also give back. The number of people visiting and hiking the High Peaks has grown exponentially over the past decade or so, and the 46ers have responded by starting a trailhead stewardship program and recently pledged $71,000 to support the Adirondack Mountain Club’s trail crew and summit steward programs. The 46ers membership also tallies thousands of hours of volunteer trail work across the Adirondacks each year.

But the Marshalls and Clark may have touched off a storm they had no way of anticipating. The DEC recently released plans for a vastly expanded High Peaks Wilderness Area that now includes the Dix Mountain range and clocks in at more than a quarter-million acres. While the bulk of the individual High Peaks are in the High Peaks Wilderness Area, several are not, including Whiteface and Esther mountains, along with Giant and Rocky Peak Ridge.

With the huge influx of hikers, wear and tear on the mountains has become more of an issue. The DEC has already begun to implement some restrictive measures, including a ban on roadside parking at trailheads that will take effect later this month. The DEC also plans to move parking for Cascade Mountain, the most popular High Peak, to the Mount Van Hoevenberg Olympic complex due to the immense number of hikers tackling the mountain — and their associated cars, which regularly line both sides of state Route 73 between Keene and Lake Placid.

In fact, crowds have grown so much that two Adirondack green groups have recently called for permit systems to be implemented at the most popular locations.

Adirondack Wild: Friends of the Forest Preserve called for the state to implement backcountry camping and hiking permits during the busiest times of the year, while the Adirondack Council proposed earlier this week that DEC begin an online parking reservation system. Both groups said the permits should be free.

In honor of the Marshalls and Clark completing what is the first documented ascent of all the High Peaks, the 46ers have planned three full days of festivities in and around Saranac Lake, where Clark lived most of his life. He is buried at St. Bernard’s Cemetery on Ampersand Avenue and has a Saranac Lake Walk of Fame plaque on the gazebo in Berkeley Green, at Main Street and Broadway.

The celebration kicks off on Friday, Aug. 3 with an outdoor movie night at Berkeley Green in Saranac Lake. The free screening of “The 46er Film” is open to the public.

On Saturday, Aug. 4, the 46ers will host a round table discussion at the Saranac Laboratory on Church Street with forest rangers, DEC staff, a former state Adirondack Park Agency chairman and others, but the big party will be on Sunday, Aug. 5.

That day, Paul Smith’s College will host a 100th anniversary barbecue, complete with live music and a special beer brewed by Blue Line Brewery in Saranac Lake. Tickets are limited for the barbecue.

Joe Ryan, a Saranac Lake resident who is also chairman of the anniversary committee, said he wanted the celebration to be a community event, and not limited just to those who have already hiked the High Peaks.

“I wanted it to be a community event, because Clark and the Marshalls are from Saranac Lake,” Ryan said. “So almost everything we’re going to do is free and open to the public, with the exception of the barbecue.” The barbecue is not free, but is open to the public.

“We wanted people to understand that we’re a community-oriented group, that we do give back to the community,” he continued. “Since 2001, we’ve given over $460,000 back to the Adirondacks, and that’s not an easy task because we do it off of $10 dues.”

Ryan said in addition to the ADK programs, the 46ers gave money to the towns of Keene and Keene Valley after Tropical Storm Irene, and they’ve provided scholarships for youth to attend DEC’s Camp Colby in Saranac Lake.

“The celebration is not just about us, because we want other people to join in and celebrate Clark and the Marshalls,” he said. “Clark was a full-time resident [of Saranac Lake], and the Marshalls were [here] all summer for most of their lives.”

For a full list of activities and information on how to join or register, go to www.adk46er.org/100th-anniversary.html.